Nemesis passed me by when it came out on Kickstarter in 2018. But I was drawn to the theme of Alien-style survival horror, and have picked the boardgame up subsequently. I have now painted the crew, but I haven’t grown to love them. The sculpts are a little busy and unclear. They take Contrast paint reasonably well but I found it hard to give each figure a focus. Each character has a distinctive colour in the game which I have tried to capture in their paint scheme. I don’t usually go for black base rims, but here I felt I had to (and I need to do a second coat, but I wanted to post pictures...)


I played this virtually during lockdown last year- I died from a chestburster thing, and then the whole ship imploded killing everyone else. Good times!

Next time: the Intruders!

I didn't realise it was the month of Junestealer; so here's my contribution before the month is up. I do like this female magus; she's quite tall even before her boots and towers over her adoring throng. I'd like to see a conversion with a pregnant belly- creepy! 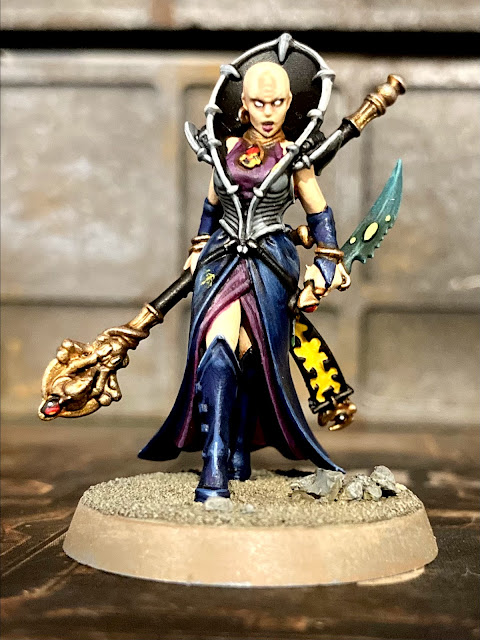 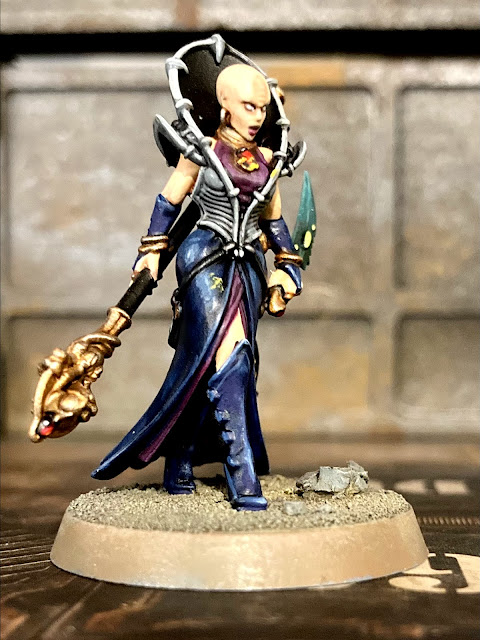 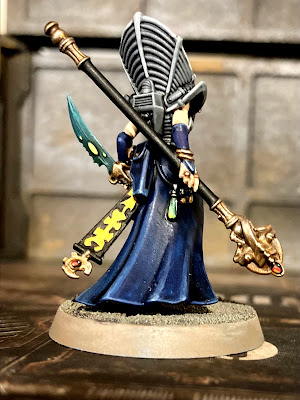 Now that I have taken these photos all I can see is that massive yellow smudge on her skirt...

I decided to jump straight into learning how to play Aliens: Another glorious day in the Corps by starting with the full campaign. Ripley, Gorman, Vasquez, Hudson, Hicks and Frost land on LV-426. They have to search the compound for Newt, the sole surviving colonist, and escape.

So, I was making reasonable progress (somewhat burdened by Ripley suffering a 'Blinding Rage' ongoing event) when I drew a very nasty card that erupted aliens in my face. I have decided to scrap this campaign and restart... Next time I'll get better, less cinematic lighting!
The board and figures are lovely. The gameplay is a little fiddly compared to the simplicity of Space Hulk, but leans into the movie details. Replaying this, I would make better use of the motion tracking tools that allow you to preempt upcoming dangerous swarm events. I wouldn't tool up with as much body armour or helmets either.

I got some friends together later and we played a 'Bug Hunt' mission, a non-canonical gun crawl. We barely advanced 20 metres into the atmosphere processor before we got absolutely swarmed, but were able to make a fighting withdrawal to a choke point where we mercilessly exterminated the hive. 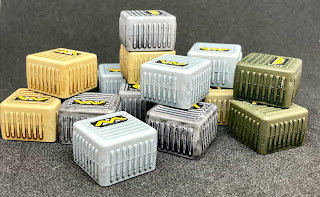 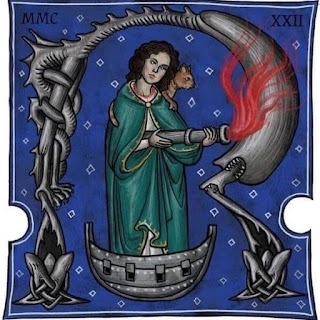 Our Lady of Survival, Ripley has three flavours: Vanilla, Spicy, and Hot Orange. The Alien Stomper Reeboks were a small challenge to paint.

She can pick up Newt and enter Beast Mode as 'Enraged Ripley', but I think 'Maternal' or 'Mother bear' is more apt.

I really enjoyed painting the Power Loader. Some warm orange-brown shades give definition to the iconic machine. The base is a little bland. 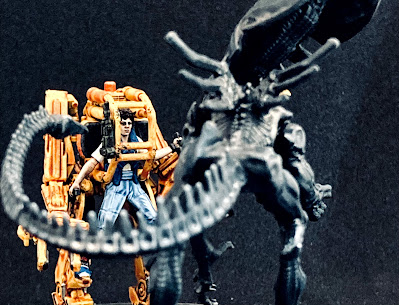 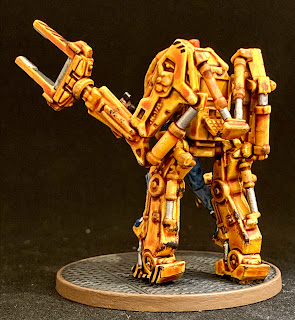 I 3D printed a resin cat and base because I could.


I flicked white paint onto Bishop. 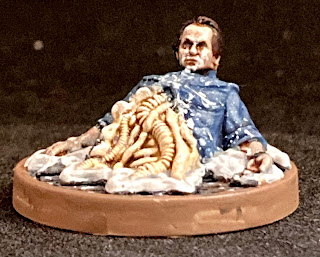 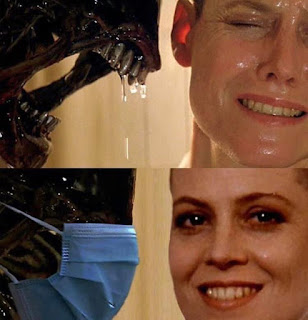 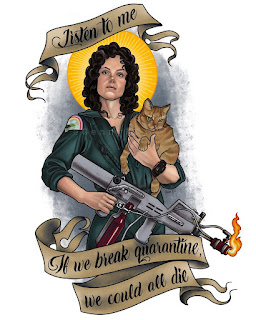 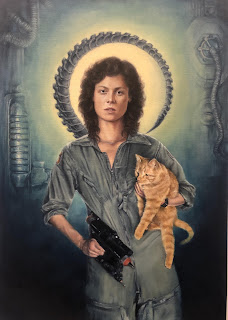 I'm afraid I don't know the sources of these wonderful artworks.
Posted by Barks at 17:00 17 comments:

I received the awkwardly named Aliens: Another glorious day in the corps boardgame earlier this year. I wasn't terribly impressed with Gale Force Nine's customer service, but at least I have my toys now. Here are the titular xenomorphs:

The miniatures are nicely proportioned and detailed hard plastic, but have very little surface area or tabs for gluing, particularly tails-to-torsos and feet-to-bases. My overcomplicated solution to the tail situation was to drill out a 1mm wide cavity in the tail and torso, and to pin it with 1mm styrene rod. I used plastic cement. None of mine have snapped off.

I also used a heat gun to twist the tails into some exciting shapes- do this with caution, some of mine are a little melted!

Painting was similarly overcomplicated. I drybrushed them gunmetal over a black undercoat, picked out claws and teeth in silver,  then used a black wash followed by a blue wash. Finally a satin varnish and a touch of gloss to their foreheads. It is very hard to capture (and photograph!) the oily rubbery sheen.

I also picked up some expansion packs: 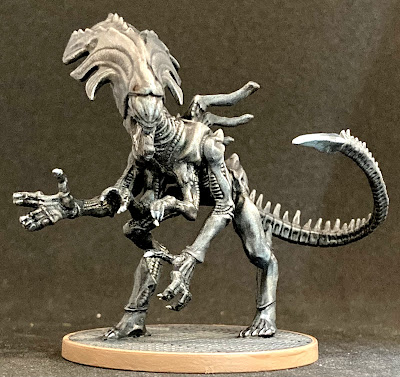 I used some UHU adhesive for the mucus on the eggs and the queen's mouth- it was really easy and I think it brings these models up a notch.

The eggs don't have bases; I 3D printed some.