Painted for the August 2013 One Ring challenge. He's painted to match my existing dwarves. 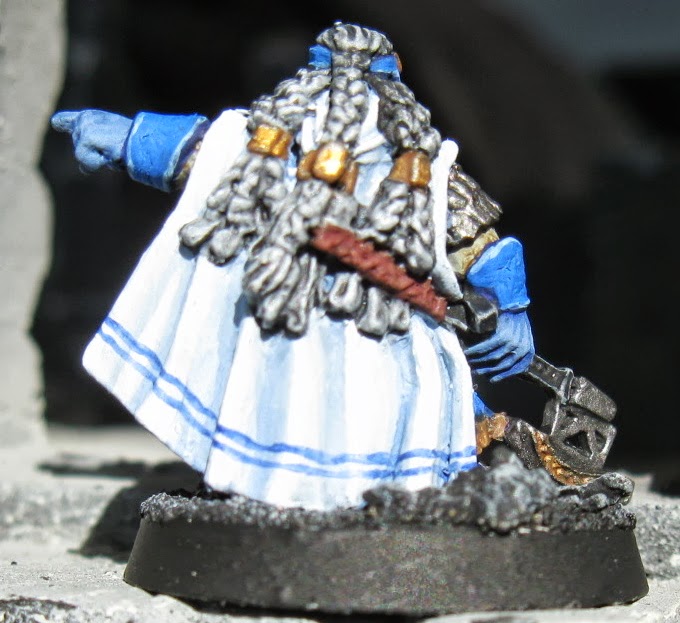 Don't worry; my Zulu project will be back soon!
Posted by Barks at 23:24 4 comments:

As part of the B9 Tourney swag, we received three dwarves- two from Stonehaven, and one Shadowforge. I picked them up at Eucalyptus Bowl in July, and was able to paint them before the B9 event. I wasn't initially sure how to paint all of them.

The first (from Stonehaven) was easy- he became a straightforward barman, and nicely complements my existing barmaid (from Four A).

I had a flash of inspiration when I realised that the next figure (also Stonehaven) reminded me of Derek Zoolander! 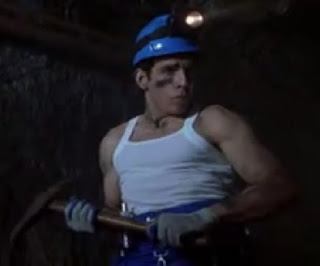 And so the Blue Steelers were conceived. I've already got a dwarf team, the Kneecappers, but now I could get a Shadowforge one... The miner could be Grim Ironjaw, or Flint Churnblade. I went for astrogranite basing, which is dull but would complement the team's mining backstory.

At the B9 tourney itself, the organiser (Babs) set up a speed painting contest if we finished our games early. I couldn't resist, and this is my finished result: 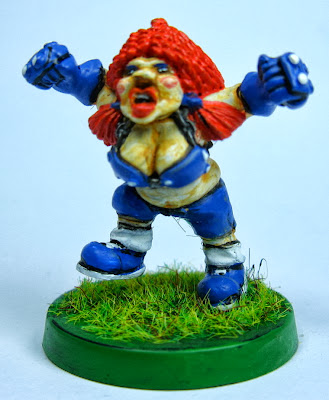 I'm quite stoked with this. She was new in her blister, and after my first match I cleaned off flash, epoxy-ed her to her base, and slapped on a coat of Skull White. After my second match, I swiftly and neatly painted the skin, clothes, hair, and flocked the base- in about 40 minutes! (no glue to the base, just Goblin Green and dunk in flock!) After the third venue, I added a few shades and highlights over 10-15 minutes, but most of the work had been done. I smugly received the Speed Demon award for this effort, but admittedly the only other entrant was Babs and he partially disqualified himself by being the organiser and not playing all the matches. Yay me!
Posted by Barks at 18:49 10 comments:

We had the inaugural B9 Blood Bowl 'Tour-nament' yesterday*. Organised by Australia's BB head honcho, Babs, this was a tourney with four games, each at different venue on the Central Coast (about an hour north of Sydney). Tourney entry included a hire bus between the venues, lunch, dinner, and a drink at each site. Each participant also received three dwarf miniatures (more in my next post), and a stubby cooler with the tourney logo.

The format was 1.2m, regen, with up to four starting skills including a double on a non-Big Guy. After each game, two extra skills could be allocated based on SPPs accrued. My team (Nurgle) was a Beast with Break Tackle, three Warriors (two with Block), three Pestigors (one with Extra Arms), five Rotters and three Rerolls.

There were 14 participants (I think), including my Nurgle, two Dark Elves, two Necromantic, a Khemri, two Dwarf, one Chaos Dwarf, one Ogre, one Wood Elf, one Human, and two Norse. Fairly bashy, all told.

The first venue was the Gosford Sailing Club. We got tables next to the large windows overlooking Brisbane Water. My first opponent was Gnome with his humans, The Corrupt Coppers. This team was designed to hurt, with a chainsaw, an ogre, and a Dirty Player. Gnome's jammy luck was with him for this game, and he inflicted three casualties on me in the first turn... it went downhill from there, and I lost 2-0, suffering 7-1 casualties... At the end of the first half, I had two players on the pitch, one of whom was face down. At one point, I almost scored but fell over on the touchdown line. At another point, I wasn't thinking, and rerolled a block dice I didn't actually need to, and came up with Double Skulls. Very silly indeed. Gnome ended up coming second overall, with two wins, a draw, and a loss.

We then piled in the bus, and drove twenty minutes south to the Ettalong Beach Club. My next game was against Vimes and his Arabic-fantasy Norse, The B9 Bastards. This was a great and close game, where Vimes pulled out a 2-2 draw with some crafty Dauntless Blocking to get away from my Beast. I took out the casualties 4-2. Vimes took out Best Sportsmanship for the tourney, which being a disgustingly nice guy, he's won a few times. We had lunch laid on for us, and I had a big plate of beef nachos.

Back in the bus, and a 40 min drive along the Scenic Highway to the Shelly Beach Golf Club. My opponent here was Mathuric and his Dark Elves, the Meannesota Vikings. Despite their really nice purple paintjob, his luck wasn't with him this tourney, and he hadn't scored a casualty in the previous two games- I didn't help him. I was able to win 2-1 with a bloody grind during the second half, taking the casualties to 3-0 with a lot of knock-outs as well. His Assassin just couldn't find a vulnerable spot on my Beast. We had dinner at this venue- I had chicken schnitzel and a rhubarb crumble.

By now it was dark, and a short drive took us to The Entrance Hotel. We sat outside and I played Rabid with his Wood Elves, the Green Glade Pickers. I didn't really think I could do much to stop him, but the elven curse struck a few times (1, reroll, 1), and I didn't waste any opportunities to waste his players, especially his Wardancers. I ground the second half, ending with three of his players remaining (including a Rooted Treeman). I won 2-1 with 3-1 casualties.


So I finished with two wins, a draw, and a loss, which took me to finish third overall, which was very pleasantly surprising. Hutcho was the overall winner, taking four wins with his Necromantic. For my prize, I won a few much-needed artists' paint brushes.

I also took out a speed painting prize- see my next post!

Overall, it was a long day (9am to 11pm), but the venues were outstanding and the weather didn't disappoint. I'm used to playing in sterile classrooms or bland conference rooms, but now we've been spoilt with waterfront gaming and good food. And a free beer with each game. It was good to see old friends again, and the good-natured ribbing on the bus trips added to the experience. I hope this event will continue in future years. Well done to Babs for organising everything.

I had expected Nurgle to be good in defence, and poor in offense. In practice, I found that a second half eight turn grinding offense worked better for me, and my two wins were both 2-1 (not the 1-0 I had anticipated). I did play a slow and patient game, often not moving or performing actions with some players, so that it would stymie my opponent and force him to make rolls. I really enjoyed moving my Beast to suck up opposing players with his tentacles. This team would be nasty if well-developed.

The venue pictures are from commercial websites, not by me.

*I can't recall what B9 stood for. Something like Bab's Blood Bowl, Beach, Beer, Bus and Bloodweiser Babes Bonanza.

I'm off to a Blood Bowl tourney, and am taking my new Nurgle team, Necrotic Corps.

For my Pestigors, I used Warhammer Beastmen with weapon snips, some bitz box finds, and some green-stuffed pustules. Yummo! Finally, some Impact! shoulder pads for that BB look.

Years ago, I made and painted these old plastic Chaos Warriors with some zombie bits. I tarted them up to more closely match my new Pestigors.

Then I had to redo my existing zombies' skin to match. I think this was worthwhile helping tie the team together, since the different figures don't really have much linking them as a coherent team besides their paintscheme.

I’m using my Mansions of Madness Chthonian as the Beast of Nurgle. I did up the base to match the rest of the team. I’m yet to find a suitable miniature that really fits my conception of this essential team member- (but I do like the qu-sh-ug (by Pure Evil), but it's too big and pricey (50mm base, £29 incl. postage)!). 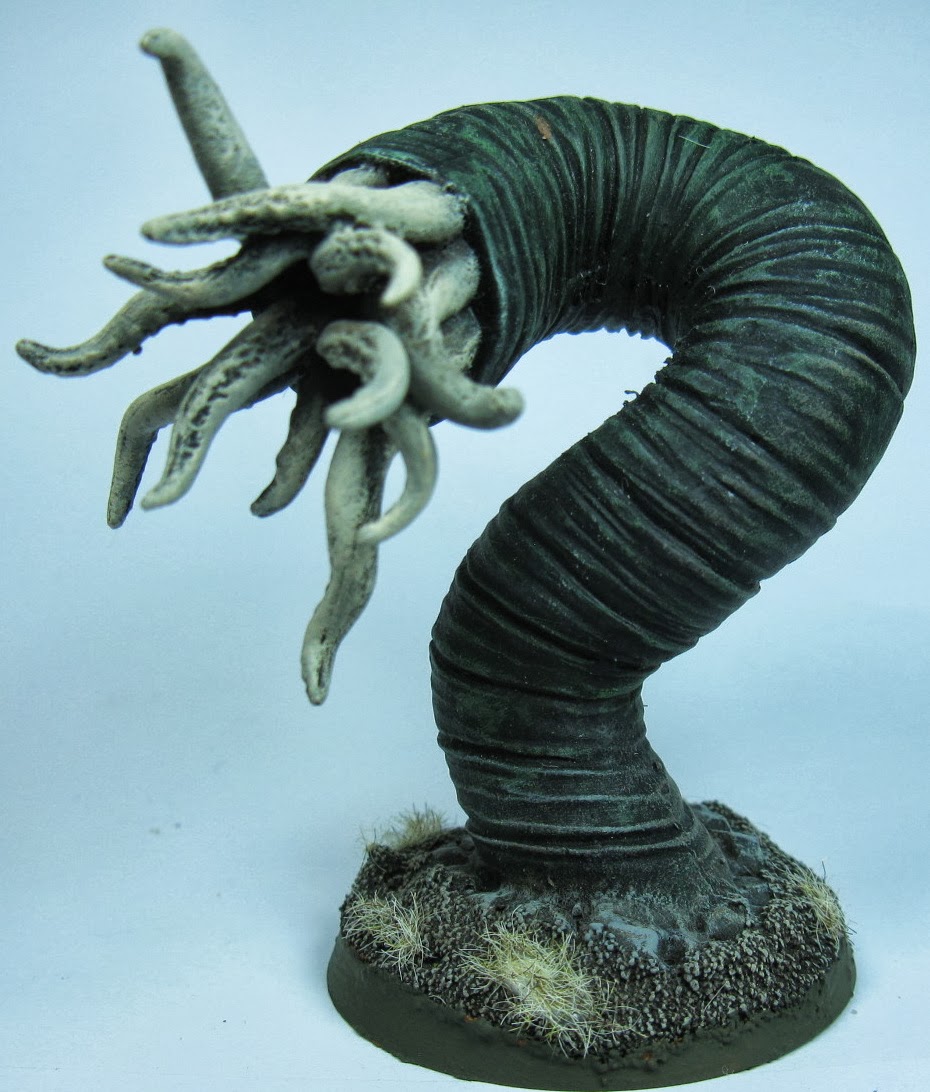 Nurglings are my reroll counters. The team coach is my trusty West Wind mad doctor. 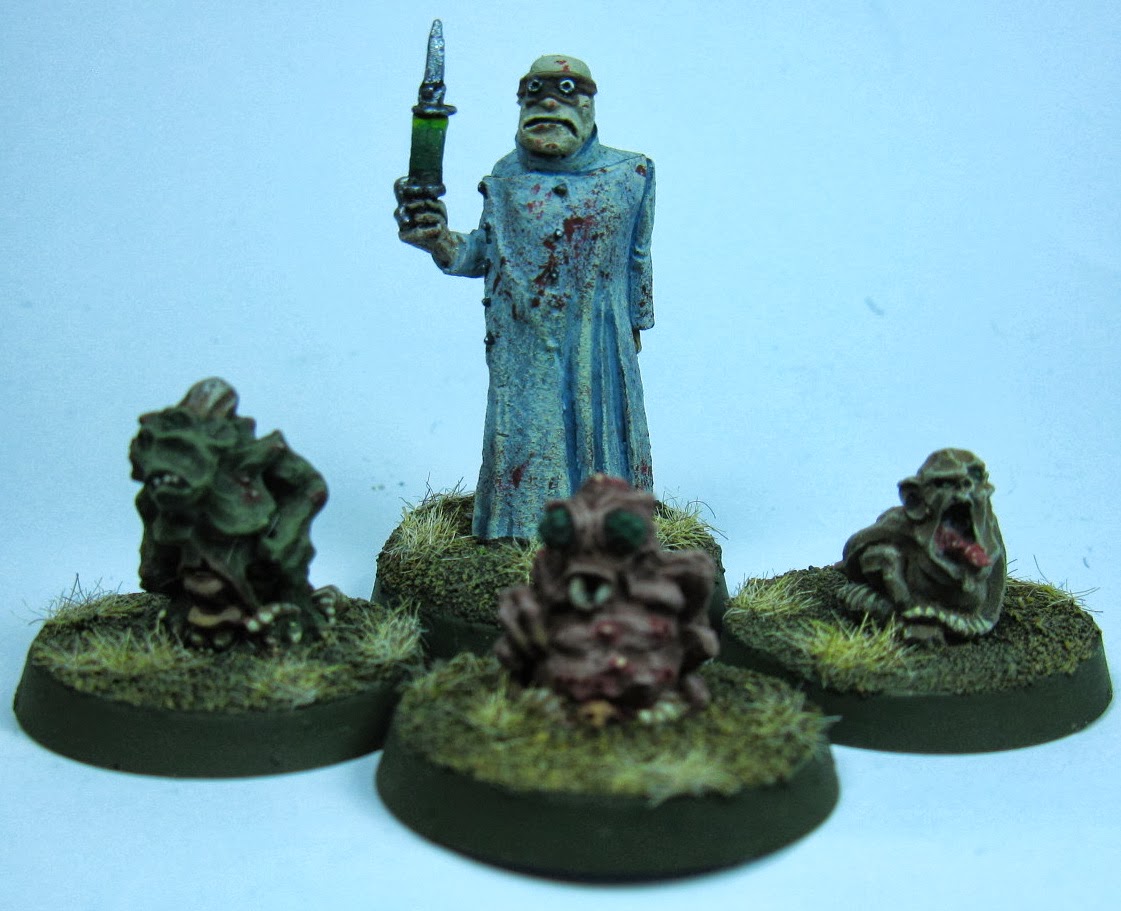 I’ve never played a game with these guys and am keen to see how they perform. I tend to play a better defensive than offensive game, and I understand that Nurgle are excellent in defence. Offence may leave something to be desired…

If I ever ran Nurgle as a league team, I'd enjoy making a few extra mutants.
Posted by Barks at 18:26 4 comments:

HäT British Infantry. Prep and base to taste- after a soapy warm water wash mine were PVA'd to 20mm washers and then the bases were built up with some filler and sand. I didn't de-flash these figures at all. I use a bit of wood with magnetic tape on it to hold my figures for spraying- it allows me to easily get to all the underhangs. I believe I got this idea from an old White Dwarf, actually. 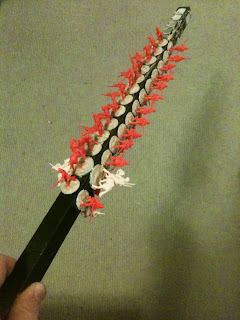 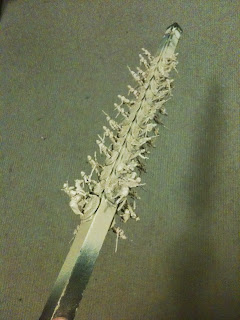 I've slightly refined the process since these pictures were taken. I do the boots at the same time as the rifle (Step 4), and I paint the buttons and belt buckle gold (Step 5).

PS: I was this close to having posts titled 'Zulu3', 'Zulu: Resurrection', 'Zulus vs. Redcoats', 'ZvR: Requiem', etc.

Email ThisBlogThis!Share to TwitterShare to FacebookShare to Pinterest
Labels: 20mm, how to paint, Zulu War 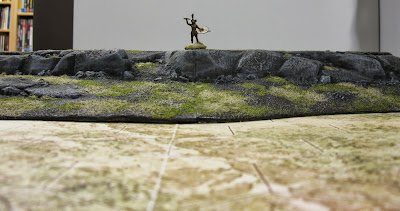 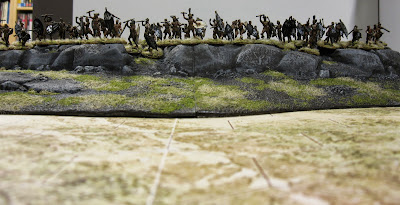 Seventy-nine Zulus for '79! Now based. I thought these were all from Esci, but I've realised that there are A Call to Arms miniatures as well.

I did a mock-up of the Rorke's Drift and Isandhlwana scenarios while I was basing these warriors. You can start to get a feel for where I'm going with this project, and these dry runs gave me a lot to think about... 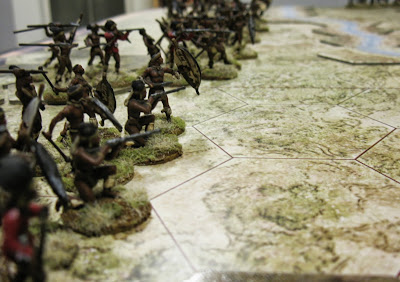 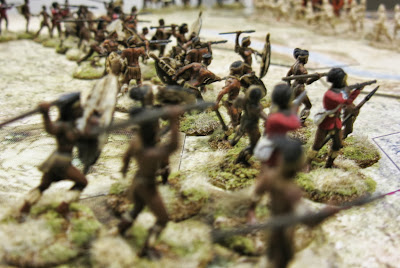 "The sentries report Zulus to the southwest. Thousands of them."

Zulu is an absolute film classic, and an inspiration to generations of gamers. I plan to scratch my Zulu itch over the next few weeks.

I intend for my project to be manageable. I've found variant rules and scenarios for the boardgame Battle Cry for Rorke's Drift and Isandhlwana (here and here respectively), by Bayernkini. This gives me a finite number of figures to aim for. (See my earlier Battle Cry project here.)
I've already got a head-start. I painted these Esci Zulus a few years ago, but never got around to basing them. I used a wash of Woodland Scenics Raw Umber, I recall.

Quite manageable, I'm sure you'll agree, especially as the largest part is mostly finished already. (Nifty coincidence: number of Zulus required: 79. Number of Zulus I have: 79). I'll be using HäT plastic 1/72 figures for the rest. I haven't sourced the artillery yet, that may take a considerable back seat. I'm planning to use speed painting with washes.

PS: had to include this-
PPS: Got a little gaming in. Tried two games , both new to me, set in the fantasy city Cadwallon: Guilds of Cadwallon, and City of Thieves. Good straightforwards fun. Also dusted off an old favourite, Race for the Galaxy.