I finally finished my Blood Bowl Orc team, The Green Streaks. These were meant to be done for Eucalyptus Bowl in April, but that got canned due to COVID-19. I really struggled with these due to the multiple stages. The shoulder armour trim, for example, is dark grey then white then dark grey then metallic. Repeat times a million...
The figures are resin, from RN Estudio.
Orc Blitzers are some of the best players in the game. Unfortunately, they've all been sculpted with the same face.
The Black Orc Blockers are on 30mm bases.
I like both these throwers, and can't decide which I prefer. Maybe the mad scientist goggles, by a whisker.
I don't mind the orcs with hair.
As a rule, I don't add blood to weapons- these are the exceptions, using Army Painter Glistening Blood Effect.
I've filled out the team with some cheerleaders from Shadowforge, and some squigs.
I think squigs are a great GW invention. Three are from GW, and the helmeted one is from Goblin Guild. I plan to use these as game markers and tokens.
I'm very glad that these are finished now.
Posted by Barks at 17:00 10 comments:

Balrogs have wings- a proof in three parts

The Balrog reached the bridge. Gandalf stood in the middle of the span, leaning on the staff in his left hand, but in his other hand Glamdring gleamed, cold and white. His enemy halted again, facing him, and the shadow about it reached out like two vast wings. It raised the whip, and the thongs whined and cracked. Fire came from its nostrils. But Gandalf stood firm.
JRR Tolkien, The Fellowship of the Ring. (1954)
"Do Balrogs have wings?" is the question that tears the Tolkien community apart. But I have proof that they do:
The Balrog from Lords of Middle-Earth: 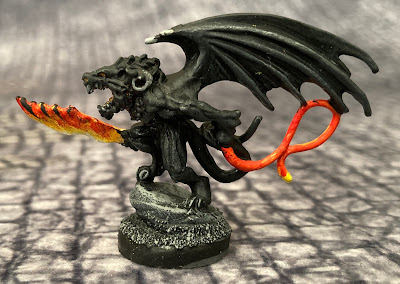 The Balrog from Journeys in Middle-Earth: 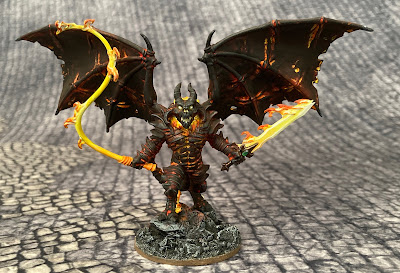 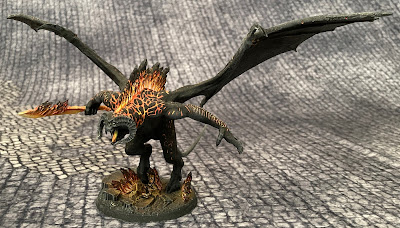 Q.E.D.
The GW/ Weta Balrog is a massive beast I'm very proud of. The new FFG one is a poor cousin, but I gave it a good shot with the painting and 40mm basing- and I’m very happy with how it came out. 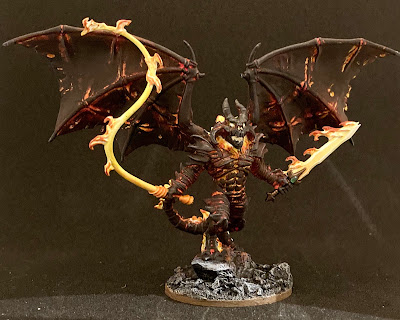 I started from a white undercoat. I painted up from yellow through orange to red, as shown here. I wanted the chest to be blazing and the extremities less so, with the eyes and mouth white-hot. I left the weapons a pale yellow.

Then I slapped on a lot of Vallejo Burnt Red, leaving the flames in the recesses. I then mixed in a bit of black and went over it again, in a reverse-highlight up to black. A light targeted drybrush of grey brought out a little detail.
Then I painted all the flames white, and brought them up again with the yellow-orange-red-black sequence. 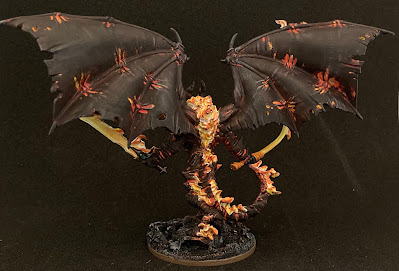 It wasn’t as challenging as I thought it would be. My GW Balrog took much longer when I painted it about fifteen years ago, using a similar sequence but without the deep red. My new one is more of a dark brown than a black,  and it looks fine.
Posted by Barks at 17:00 8 comments:

Ennio Morricone died this week. The first spaghetti western I saw was A fistful of dollars, and I couldn't stop whistling the tune after that.
These figures are from Artizan, and are lovely sculpts. I painted them about 10-15 years ago, but never finished the bases. I have aspirations of doing a vignette around a grave, like the climax of The good, the bad and the ugly. 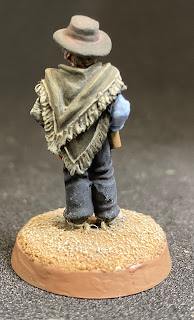 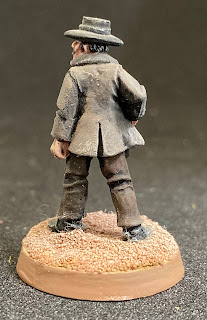 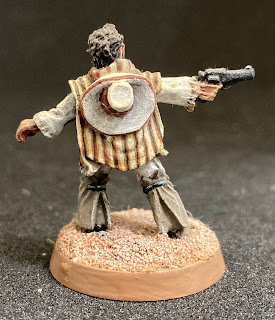 After diving into Sergio Leone's films I bought a CD of Morricone's classics; it is great music and I'm listening to it again now. Vale! 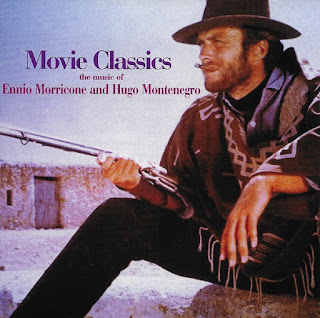 I've been neglecting the blog a bit recently. I have plenty of projects on the go, but I don't like doing work-in-progress posts. Regular posting will resume imminently!
Posted by Barks at 17:00 12 comments: