I had my first game of Chain of Command at CanCon. This was a participation/ demo game run by Trailape. My opponent was Gorillamo, running the French.

I deployed one squad with a 50mm mortar on the low brushy hill to the bottom right, who covered the advance of the remaining squads on the left.

Some French rifle fire near their first objective was hit with a fusillade of return fire, including a very accurate mortar blast. Unfortunately for me, the mortar ran out of bombs and was never able to resupply!

My moving squads became bogged down under fire despite covering smoke.

My Pz I trundled on and was immediately destroyed by the AT gun! My force morale was crumbling rapidly and my squads weren't advancing.

The French engineers destroyed their first objective, and ran for the second- a disabled tank.

But the engineers were caught by devastating MG-34 fire and were destroyed before completing their mission.

It was a fun game which could have gone either way. Trailape was engaging, the terrain was appropriate, and the accents were outrageous. I liked the variable turn lengths, the patrol phase, and the inability to micromanage every soldier. I'd play again, but I don't think I'll be jumping into a new period...

I went down to CanCon last weekend, and I'll put up a couple more blog posts this week about what I did down there. I've been a bit busy otherwise, so the blog has suffered. Similarly, we didn't organise a Bloggers' Catch-Up this year, which was unfortunate. I did, nevertheless, manage to chat with  fellow Analogue Challengers Paul of the Man Cave and Slowpainter John.

I only took a few photos this year of some participation and demo games which caught my eye: 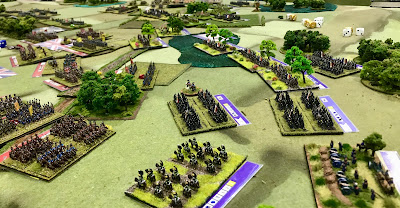 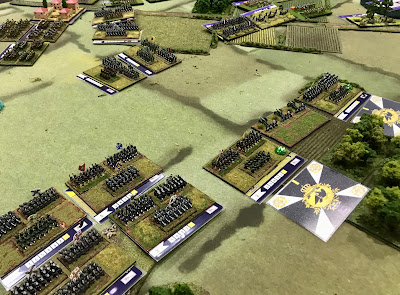 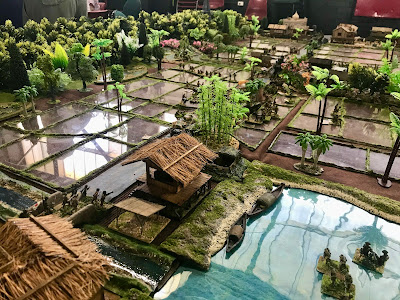 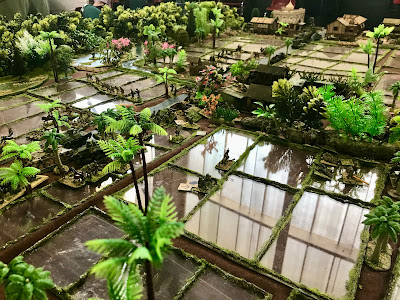 Wings of Glory. There were Tripods as well! 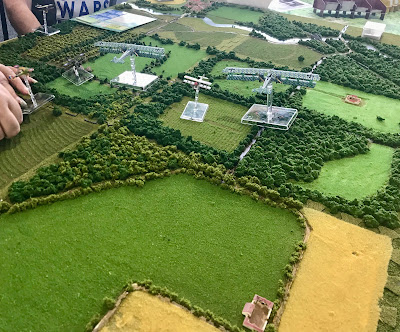 Here's my swag: a mix of boardgames, paint, scenery, and new and second-hand figures! 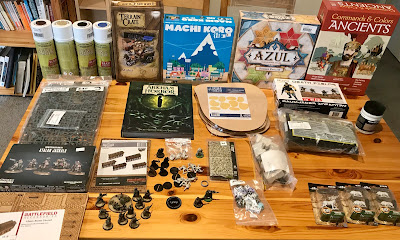 For my sins, at CanCon in a few weeks I have decided I will play a few tournament games of GW's Middle-Earth Strategy Battle Game, the latest version of their Lord of the Rings ruleset. I haven't played this edition before, and I've played about one game of the first edition in the last decade...

So I drafted Gorillamo to give me a test game to blow off the cobwebs and kick the tyres. I threw together two forces (~370 points each), dropped down some of his great scenery, and gave him a run down of the rules.

My force was Mordor Orcs with a troll and some minor commanders, and he had dwarves (pics way back here) with some captains, Iron Guard shock troops, and some rangers with bows.

It wasn't quite as one-sided as I had expected. The terrain funnelled us and protected our flanks. I did inflict some hits on him, but he made mincemeat of my orcs who broke and ran. The troll was tough, but only able to smash one guy per turn. I'll have to familiarise myself better with the rules because there's more actions monsters can do in this edition.

Overall, it was fun. I like the hit-wound-remove mechanic (no saving throw), and remembered how underpowered scattered bows are. Gorillamo will be a soft touch for playing more LotR in the future.

I've decided to keep my force simple for CanCon- numbers rather than fancy heroes and cavalry etc.  I'll tweak my list and build it up to 500 points. I've got a decent collection of LotR that I painted many years ago- I'll have to drag it out and onto the blog.
Posted by Barks at 17:00 12 comments:

I got to play two introductory games of Aeronautica Imperialis last week. The game and its superb models belong to my nemesis Gorillamo.

The game is quite simple, even compared to, say, X-Wing or Wings of Glory. It is hex-based, which is great for removing disagreements over distances, facings and arcs. Movement is almost too easy, and your planes skip all over the sky- but I still never mastered it!

I was pretty comprehensively blasted out of the sky in both games. The Imperials have great mid-range firepower, and Gorillamo's uncanny ability to roll 5+ saw me decimated before I could get in to use my close-range orky advantages.