As promised, here's my dismounted Glorfindel, painted for the One Ring October Painting Challenge. 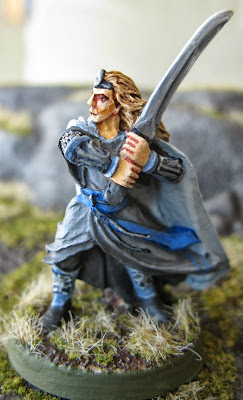 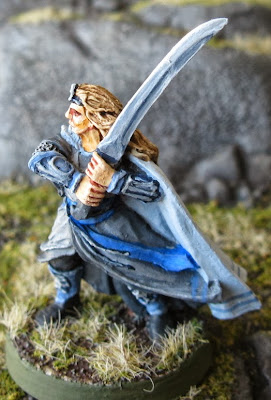 This challenge stipulated you had to try non-metallic metal painting (damn!). I'd never really tried it before, and it's fair to say I haven't got the technique down yet. Probably needed more blues than greys on the sword. I shan't be trying it again in a hurry...

Painstaking research leads me to conclude that this is indeed the same Glorfindel who was in the Silmarillion.

These Tom Meier sculpts are from Khurasan (look for 'Sci-Fi Superhero and Spirited Sidekick'). Anyway, Allison M. goaded me into getting mine painted- so here they are. 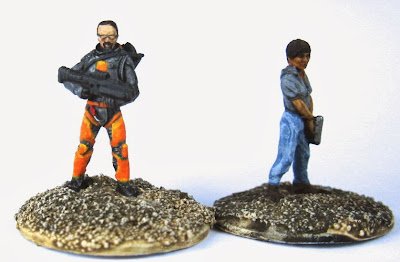 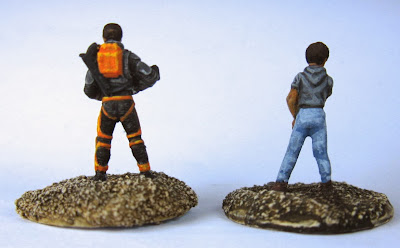 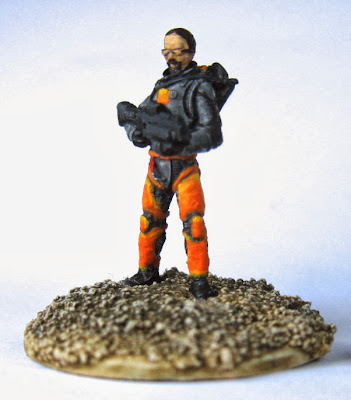 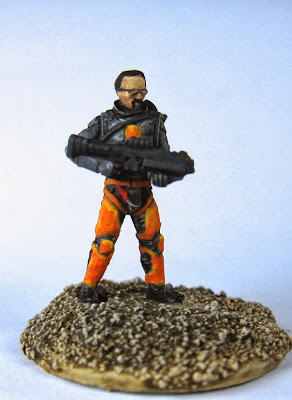 I still haven't completed any of my SAGA forces. I've knuckled down to get the final two units of my Vikings underway; sixteen unarmoured warriors (Gripping Beast plastics). I gave them axes left over from the Viking Bondi. I uses slottabases rather than the flat discs provided so as to mix with my existing figures (mostly LotR- these could be Ruffians or Dunlendings, after all). I've left the shields off to make painting the figures easier. 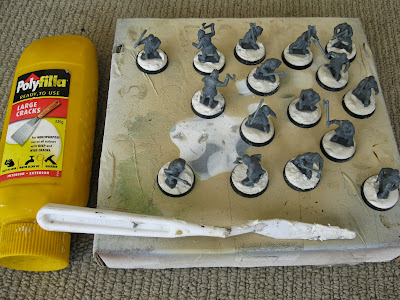 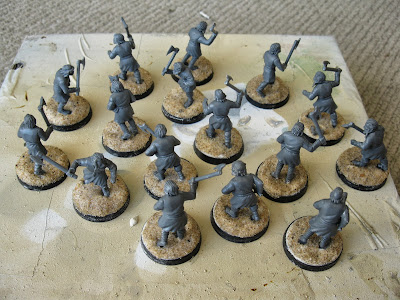 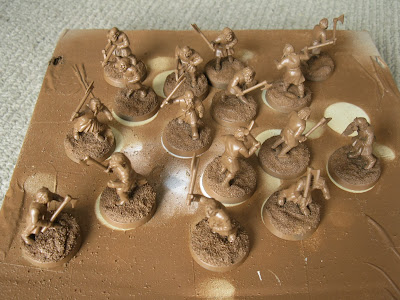 I build up the base with plaster, then PVA sand on. Finally, Army Painter Leather Brown spray.

Moving on from Rorke's Drift in time and scale, but staying in the same continent... Fellow Blogger and Newcastle Legions member StazMatt has been putting up pictures of his 15mm Africa terrain- check it out here! He's inspired me to put up pictures of my 15mm Peter Pig militia I did a year or two ago. 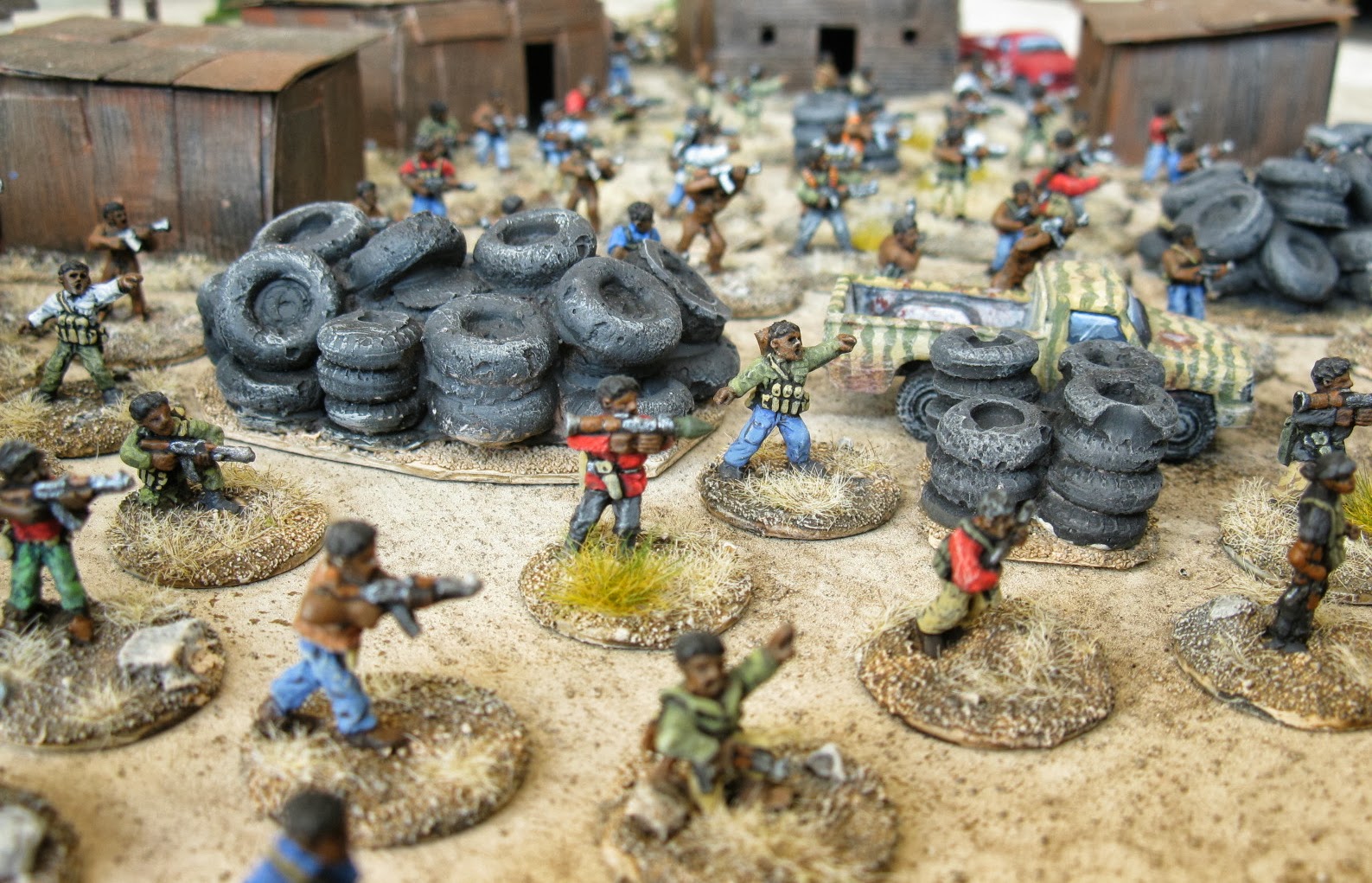 My imagiNation for these guys is Bangalla, a once-prosperous nation near the horn of Africa. Destabilising internal and external influences have thrown this beautiful land into turmoil. This rag-tag militia is typical of the undisciplined warbands that roam the land, terrorising the civilians. They wear a mix of civilian clothes and jungle greens, and are equipped with old Soviet bloc kit.

Bonus points if you know where I stole the idea of Bangalla from.

First up, my leaders. The kneeling ones could be weapons crew as well. The leader in black isn't Peter Pig, but is from Blaze Away. See another pic of him here.

RPGs and RPKs. There are eight of each per pack- four of my RPKs were recruited for Taliban conversions- more on that at some future point.

The rest of the AK boys. 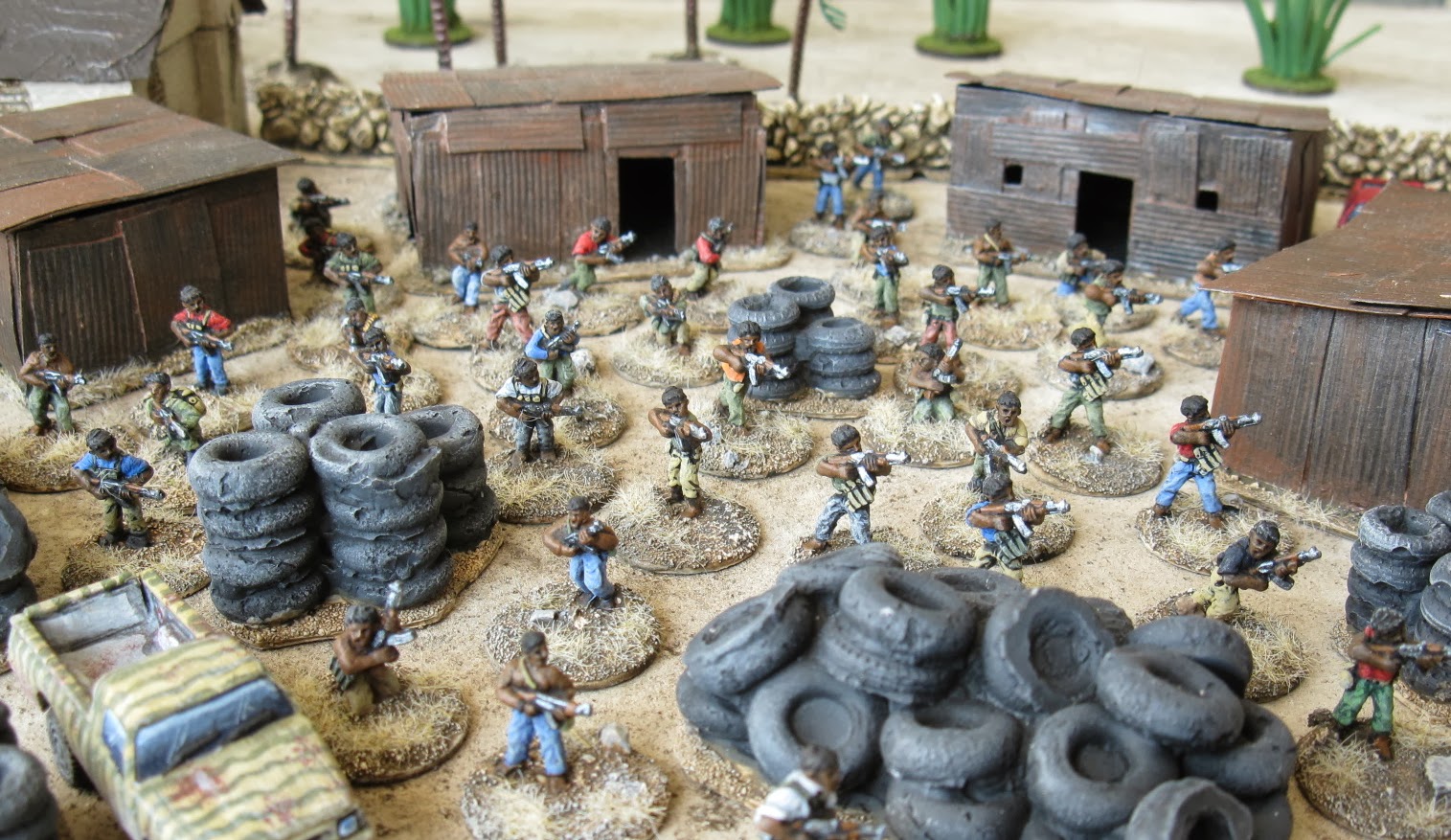 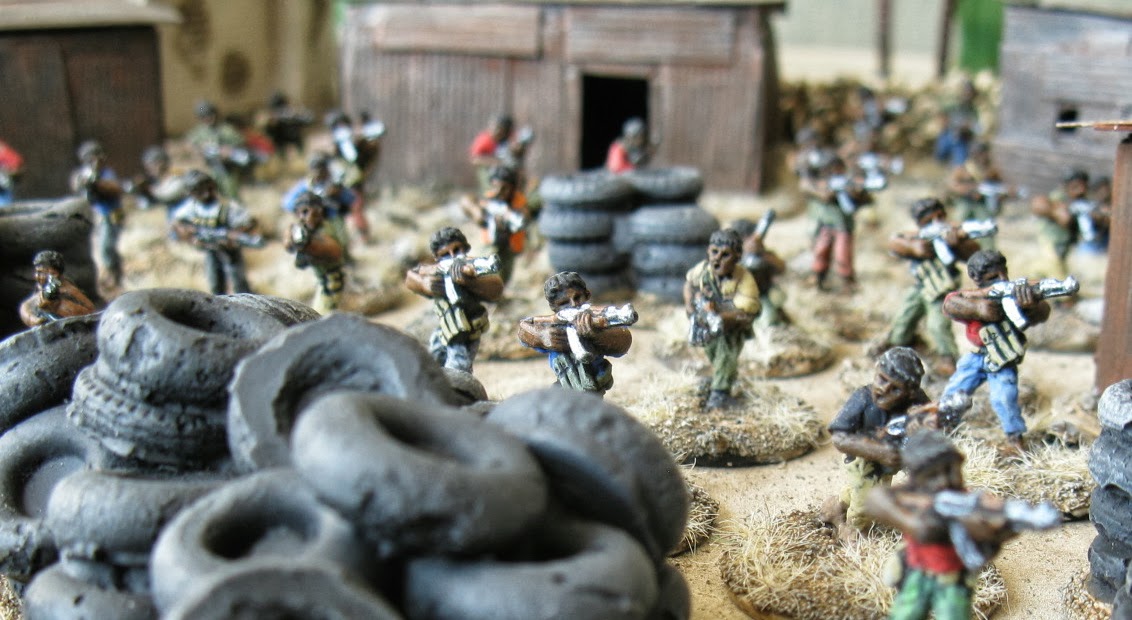 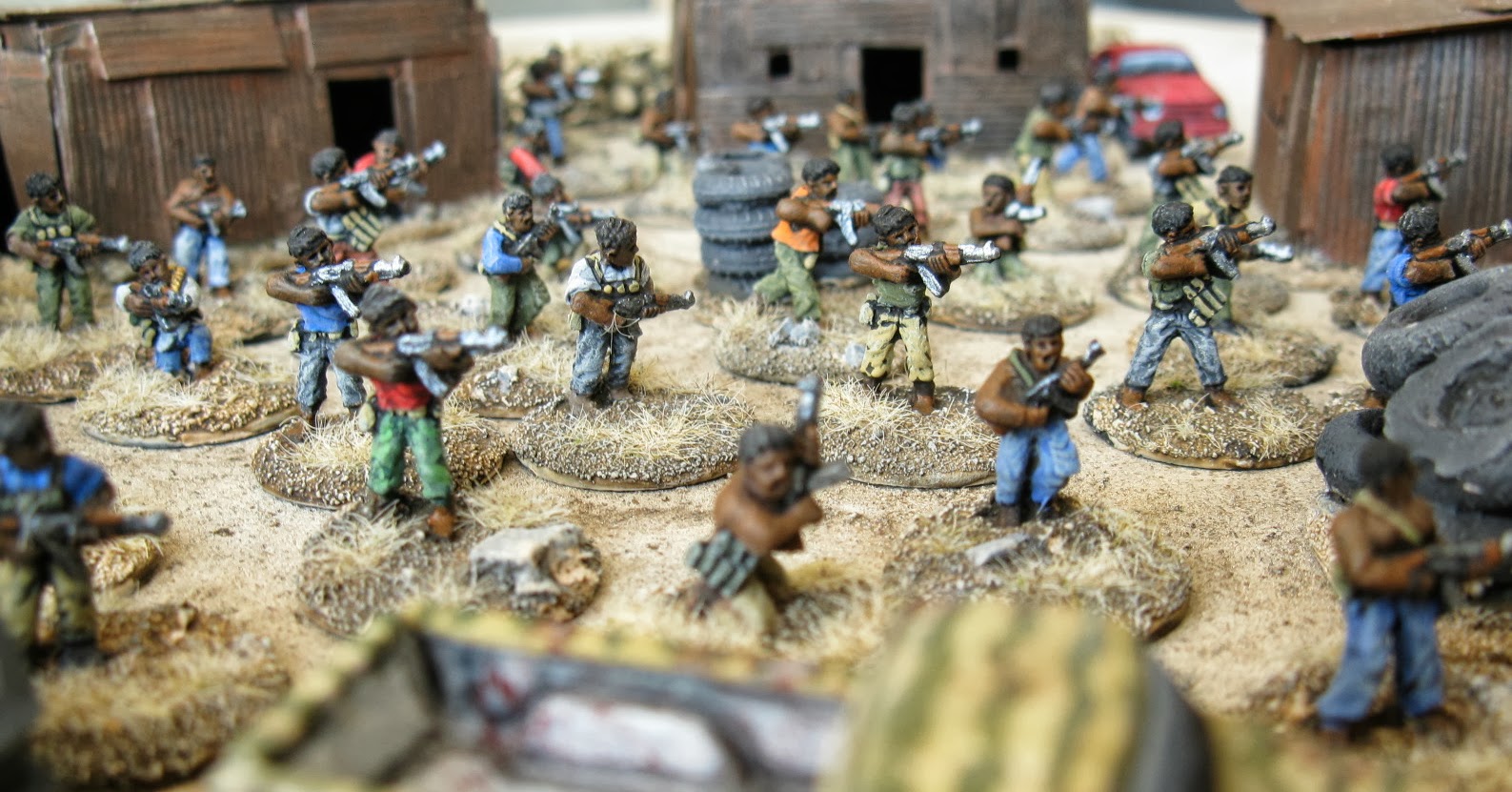 Everyone together! You can see here how the RPGs and RPKs have colourful grass tufts on their bases to help distinguish them. The leaders don't, they have more pronounced poses. 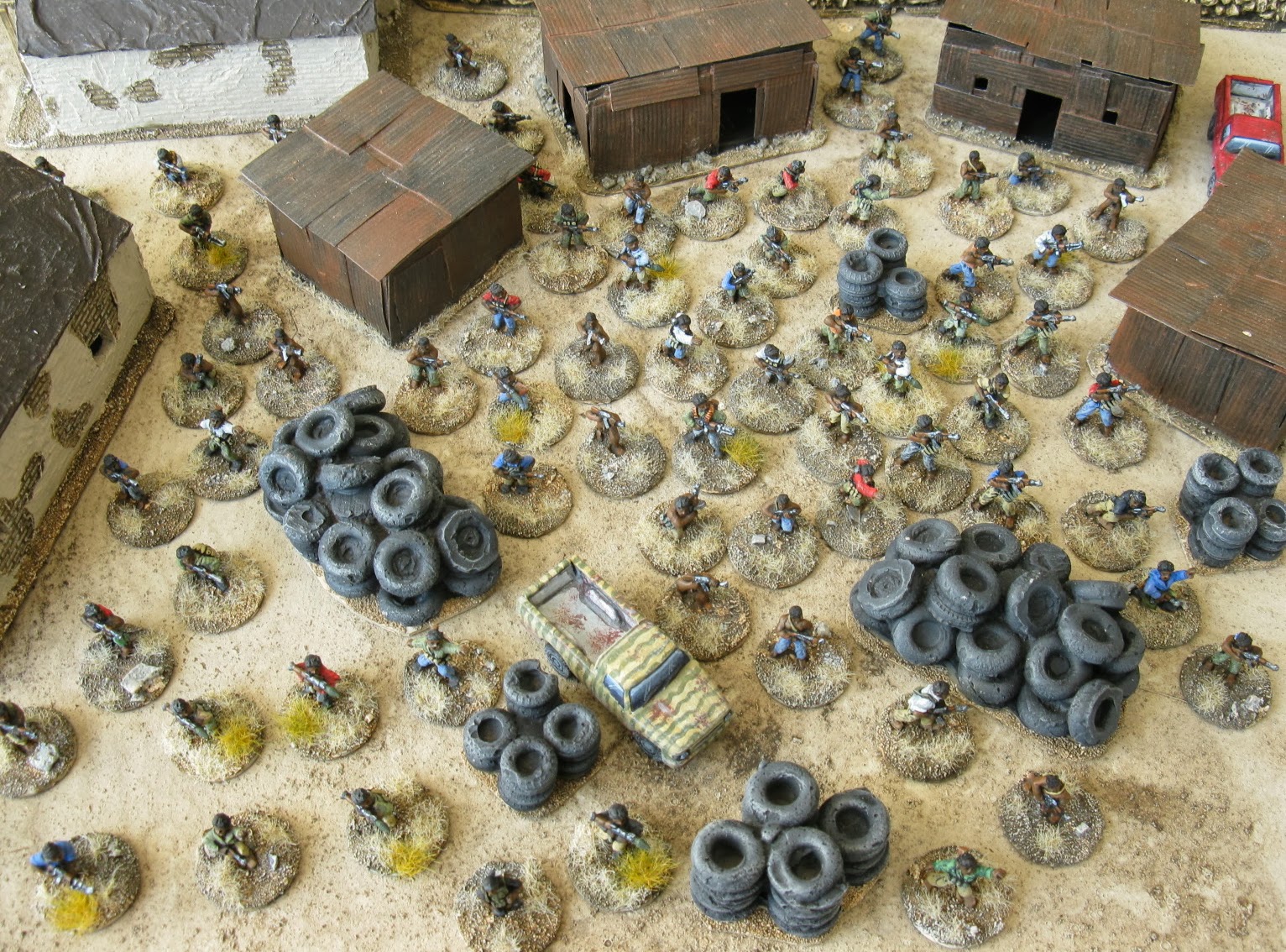 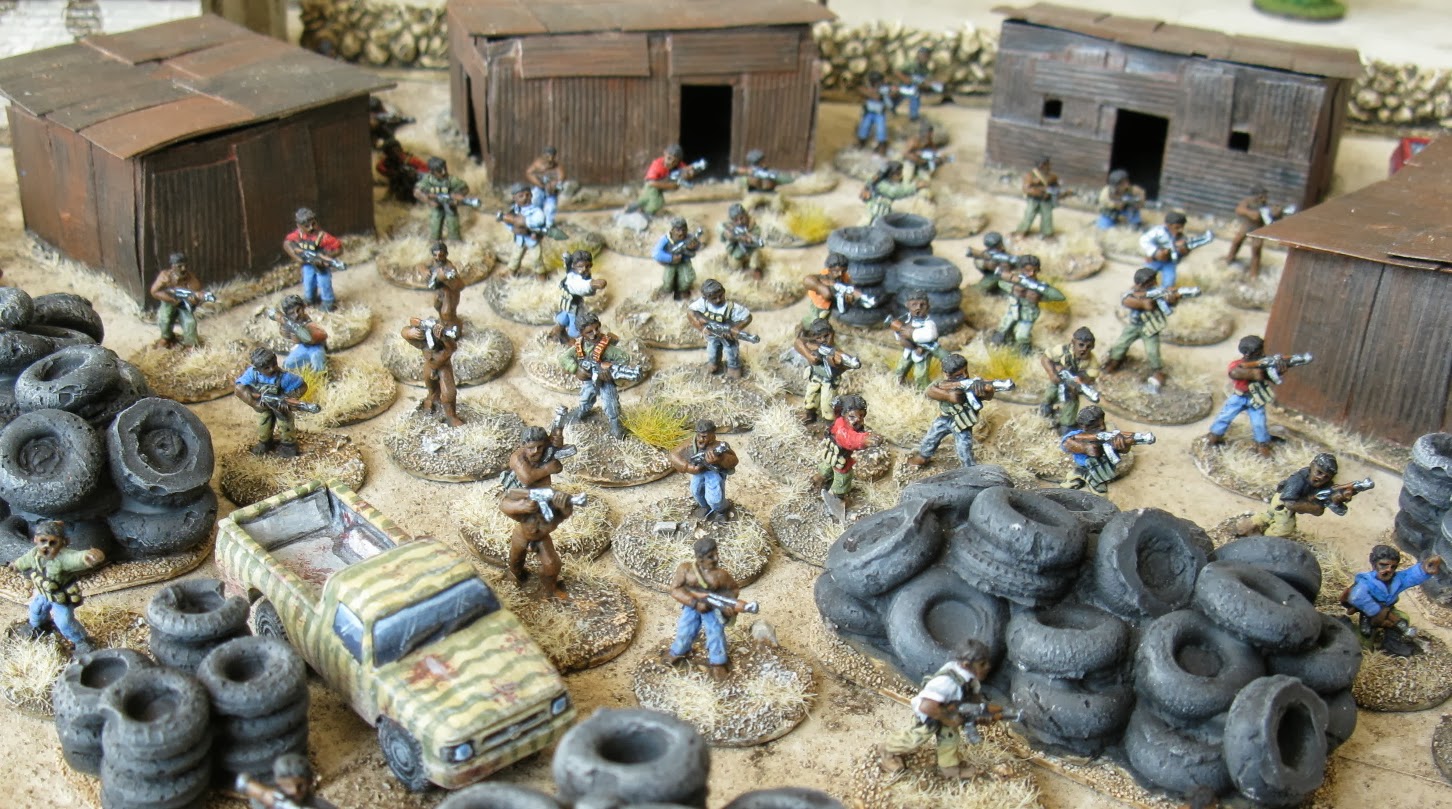 I'd like to get a few crew served weapons for this mob, and especially to make some weapons to go on the backs of the vehicles. The shanties were trial builds. I like them, but maybe they need more colour? I plan to build a tabletop-full eventually. The tyres are HO/OO railway scenery from some backyard industry in Hobart.

I've got a soft spot for those tragic pictures of bizarre African militias, offset by despair at images of child soldiers.