The Joker is Wild

Joker is the definitive bat-villain. An unpredictable and terrifying enigma, the Clown Prince of Crime is able to be portrayed in various ways. I liked painting the greenish-white skin, the hair, and the red-rimmed eyes.

This version- my favourite of these sculpts- is the Jim Lee portrayal seen in Hush (2003). I don't know if my miniature is warped, but I like the crazy tilt. I do wish there was a 'bang' flag for his revolver.

In the Scott Snyder run (2011-2016), Joker had cut off his face and this mask became a horrific totem. This Joker really emphasised the terrifying aspects of his personality, wearing his skin as a mask and dressed as a mechanic- Mr Joe.

This last Joker is more physical, jacked up on Venom.

I painted these thugs in a matching palette, and was surprised at how easy it was to apply clown makeup.

I have painted enough figures to get some games in! Here's photos from our first game- click to embiggen! 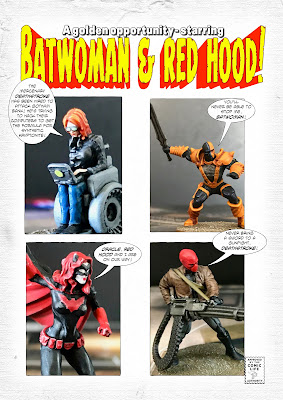 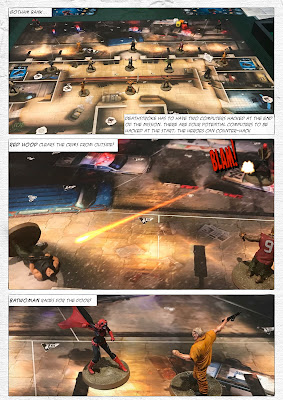 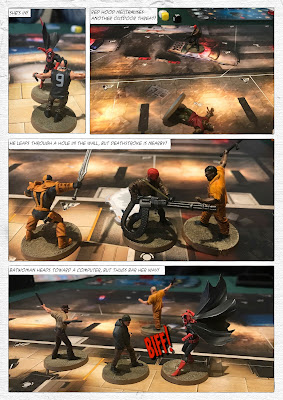 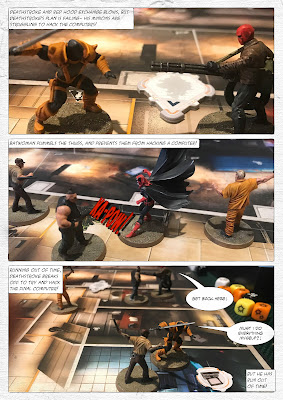 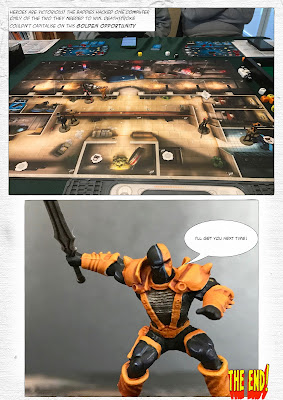 This mission was fairly straightforward, but slightly anticlimactic insofar as the baddies (me) simply couldn't hack enough computers to win, denying the goodies a chance to punch and counterhack to victory. It was nevertheless undeniably fun and quick. We played a few more games which were also good fun, including an epic police raid on a subway tunnel. Unfortunately, I didn't get pictures of these.

It is a solid mechanical system; an advance on Monolith's fine earlier Conan ruleset.

Let me know if this format works or if I can tweak it at all!

Comics made with LensFX iOS app and Comic Life 3.
Posted by Barks at 17:00 2 comments:

I've got another collection of not so familiar bat-villains today.


Red Hood (not to be confused with Red Hood) is a villain from Batman's earlier career, and is a strong contender to have become the Joker following a bat-related industrial accident. He wears a red glass dome which I painted gloss. His gang wear anonymising masks, and are ordinary Gothamites blackmailed into participating. None of them know each other's identity.

This incredibly hulking figure is a simple soul who lives in Gotham's sewers. He is often coerced into crime by villains who need some muscle for a job.

The deadly mercenary marksman with gun-gauntlets.

The creepiest thing (and there are many) about Ratcatcher is his fingerless gloves. Fingerless!

Killer Moth was a, well, colourful baddie from the Silver Age (~1955-1970ish). He's been re-envisioned as a bit more grounded, but still using gas and compressed air weapons. He's still far from a top tier baddie.

This pyromaniac carries off the insect schtick better than Killer Moth- a better name, mostly.

I can't wait to get these bad-ass lookin' dudes on the table, and have them and their tacticool gear taken out by murder clowns and bat-freaks.

The basic guys are great generic SWAT figures. I like the lettering on their backs. The visors grew on me- I painted them pale blue-grey, then blended down a Paynes grey, then added white reflection streaks. The mould lines in the photo are killing me- they're not that noticeable in real life!


These guys have bomb disposal skillz. I chose orange for their cases as it is a great contrast with blue, and I'm getting better at painting it.


The heavies have non-lethal sticky foam dispensers. They weren't working for me until I increased the highlights around the face, which I maintain is the focal point of any miniature.

Beyond the semi-formal inner Bat-family, there are other vigilantes who fight crime.

The daughter of a mob boss, Huntress now fights crime in her practical outfit. Her miniature has a swirling cape which is quite dynamic.

A nightclub worker pushed too far? This figure is based on art in Frank Miller's All-Star Batman and Robin the Boy Wonder (2005-2008), which should be avoided if possible- lovely art, terrible writing.


Seeking revenge after her husband's murder, Katana's katana contains the souls of those it has killed. Sometimes she is depicted with grey skin, which I have replicated here- I'm not sure I like it.

I don't know much about Batwing, but he's the son of Lucius Fox (played by Morgan Freeman in the Nolan films).

A fostered child, he patrols Gotham by daylight.

A religious cult's assassin, Azrael saw the errors of his ways and now fights crime.

Another billionaire philanthropist vigilante, except this time with a Robin Hood fetish. His love interest is Black Canary.

In these morally turbulent times, it is refreshing to see clearly branded and distinguishable villains and henchmen. More recent portrayals of The Riddler show a rogueish swagger, away from the weakly nerdish earlier portrayals. He's highly punchable.

I'm in a bit of a painting rush so these were mostly a wash without highlighting.