Which it is a Sails of Glory (and CCN) AAR

Before seeing combat with the new Sails of Glory game, I thought it would be fun to try to learn how to handle my ships. I set up an island, and a friendly race between a frigate and a ship-of-the-line to be first around the island and bombard an enemy lighthouse.

The frigate crashed into the island, and the ship-of-the-line missed stays whilst tacking and drifted off the table...

After that auspicious start, I had two games against my regular Napoleonic nemesis, Gorillamo. I captained the HMS Terpsichore (32), and he took the Courageuse (34). Gorillamo has painted very fetching white stripes on his Terpsichore model. We played on a hex naval board he had available.

For the first game we played with 'standard' rules, which don't have crew actions, changing weather, or special damage. With the wind coming from my right, we did a half-circle around each other before becoming entangled and engaging in a yardarm-to-yardarm slugging match, which I lost. The Admiralty will not be pleased...


In the second game we added as many 'advanced rules' as we could handle. We crossed each other's paths and then withdrew to make repairs, before crossing again. I slowed down infront of him and was able to force him into a boarding action which took several turns for me to eliminate his crew and make him strike his colours. Huzzah!

So, what did we think? It was enjoyable and required good planning decisions in terms of manoeuvering and allocating crew actions. The 'sailing' did feel appropriate in terms of attitude to the wind, but wasn't more taxing than it needed to be. Both the actions fought did wind up as a yardarm-to-yardarm slugfest, but it felt 'right'. We haven't tried it yet with the larger ships, or with multiple ships per side, and would like to try some of the scenarios.

There is a need for a QRS or sequence flowchart for the advanced rules. It's not easy to remember when you change weather, take leak or fire damage, fix stuff, and check for entanglements and grapnels etc.

To continue the Napoleonic theme, we dusted off Commands and Colours: Napoleonics, and refought First Rolica. I was the defending French. We cautiously manoeuvred before the British launched a large pincer which I was unable to stop, losing 5-3. More good fun, and a game I have to get more of.

Which it is a Sails of Glory review

'I do not think there is any more futile observation,' he said aloud, 'than talking about what should be done in a battle at sea until you know the direction and force of the wind, the numbers on both sides, their relative positions, the state of the sea, and whether it will take place by day or by... By God, Stephen, I could swear I smelt toasted cheese.'
Patrick O'Brian, The Commodore

I am an unabashed Aubrey-Maturin fan, and was with child for Sails of Glory: Napoleonic Wars (SGN) as soon as I heard about it. It was Kickstarted in April 2013, and arrived this week.

SGN is from Ares Games, and transfers their successful Wings of War WW1 fighter game mechanisms to the Napoleonic naval genre. Each player controls a ship or two and plans actions in advance. Movement is then simultaneous. A card with a manoeuvre arrow is placed in front of the ship, and the ship sails along the arrow. Different ships have different speeds and turning abilities, and the wind will appropriately affect manoeuvres. Combat is also simultaneous, with the number and type of damage chits being allocated depending on the range, aspect, and type of ammunition used.

What's in the box?

You get two French and two British ships; a frigate and a ship-of-the-line for each side. Each has two different names available, depending on which inlay card you choose. These are plastic pre-paints in 1:1000 scale. The sculpting and painting are adequate, but the painting is not quite up to X-Wing standards. There's a solid in-fill between the mast and sails, which has disappointed some, but I can live with it. There's no rigging or pennants, which isn't necessarily a bad thing. The sails and masts might benefit from a touch-up and a thin brown wash to pick out the detail.

They come on very thick plastic bases, with clear plastic covering an inlay card showing firing arcs and how the vessel responds to the wind direction. It's not the most aesthetically pleasing, but once the game's underway you need to have all the info there and I quickly overlooked it as the action heated up. I think it could have been thinner, though. Also, the ships don't fit securely in the bases- you can't hold them upside down or move them vigorously without risking them coming off.


A key component is the 'ship's log', which tracks your orders, your crew's actions, sail settings, and your damage. All the pieces are good quality card, with a nice period aesthetic.


You also get some islands and rocky outcrops, which have nice artwork. You don't get a playing mat, but there is a 2'x3' one available. A 4'x3' playing area is required for half the scenarios.

There are two range rulers, two 'attitude indicators' (to see how you are sailing compared to the wind direction), and a wind direction/ strength gauge. The wind has three strength states, and eight directions.

And, of course, all the order cards, action counters, ammunition markers, and weather and damage chits.
The rules have Basic, Standard, and Advanced rules depending on how hard you want your Captain's job to be. The more complex rules add all the factors like wind strength and changing weather, changing sails, ammunition types, pre-planned orders, crew actions, raking shots, double-shotting, aiming high, and shore fortifications, to mention only a few. There are six scenarios with variants and solo rules suggestions.

So, putting it all together...

Captaining a ship is hard work. You have to plan your sailing a turn in advance, and if the wind changes you could literally be taken aback. You've got to plan your firing as it takes a turn to reload, and you'll want to have your opponent in optimum position rather than wasting a shot. And you'll have had to make sure that you've preloaded the best type of ammunition- ball, chain or grape- because you can't change your mind! After the firing starts and you're taking damage, you've got to allocate your crew to firing, reloading, changing sails, and fighting fires and plugging leaks. That's before the enemy sweeps your deck with grape and musketry and sends the boarders! I think I'll struggle to manage more than two ships at once!

For my first battle report and some subsequent thoughts, see here!

Email ThisBlogThis!Share to TwitterShare to FacebookShare to Pinterest
Labels: Ares, Sails of Glory

Games in the holidays

Got to try a few new games and some more familiar ones over the past couple of weeks.

First, Super Dungeon Explore. This is a dungeon crawler with a kawaii/ chibi facelift. I played the dwarf, because then I don't have to worry about fancy stuff like magic and can just concentrate on rolling sixes. Our party was rapidly overwhelmed by hordes of undead with baby dragons, but somehow we pulled off a win. It was a real grind to get to that point, however. This may have been due to the baddies having extra health, essentially requiring each one to be killed twice. The cuteness (Sparkleburst arrows, anyone?) is quite superficial, and there's a solid dungeon crawl engine underneath. Decent components, but the casting mold lines on the figures would bug me if I was going to paint them.

The next new game I played was Tannhäuser. This is a skirmish boardgame (which Neil Shuck would term a 'hybrid game') set in a Great War which has dragged on thirty years into the late 1940s. Weird World War 2, except it's still 1, if you follow. We had a straight-up deathmatch, with my Union troops (square-jawed American pulp heroes) against his Obscura Korps (Nazi-occultists-but-there's-no-Nazi-party pulp villains). Very Hellboy-esque. I tried to follow the Principles of War and concentrate my force, but concentrated troops are grenade fodder, and we found out how nasty grenades are rather quickly. Also, heavy automatic weapons can't go on overwatch. Indignant splutter! It was all over on turn four, and my sole survivor beat a hasty retreat the way she came in, with no baddies killed. We're not sure we were playing correctly, and I'd like to try some of the scenarios other than deathmatch. A quality board, decent pre-painted figures, and a nice line-of-sight system are good points. The board 'squares' are multi-coloured circles. If your circle and your target's circle are the same colour, you can see each other. Simple.

My third new game was a lightning-fast game of Cthulhu Dice, which I won. Iä! Iä!

I had another couple of rounds of Zombie Dice, and a four-player game of Race for the Galaxy- still a really solid game.

And that's what I did in my holidays.

PS: But soft! What is this the postman brings... 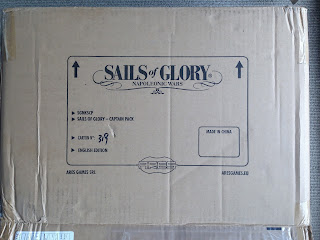