This was one of those rare paintjobs that turned out exactly as I had pictured in my mind's eye. I think it would be a cool Chaos Pact goblin, and pairs nicely with my flying monkeys.

I sculpted the banana out of green stuff, look out Perrys!

This says 'Monkey Bowl III' on the base, and was listed at Impact! Miniatures as Football Chimp. I don't know what or where the Monkey Bowl is/ was, and would be interested to know. I picked it up as a prize somewhere along the way.
Posted by Barks at 22:13 10 comments:

Last year I painted the 'Chaos Leader Star Player' from Willy Miniatures. He's seriously big, being on a 40mm base. 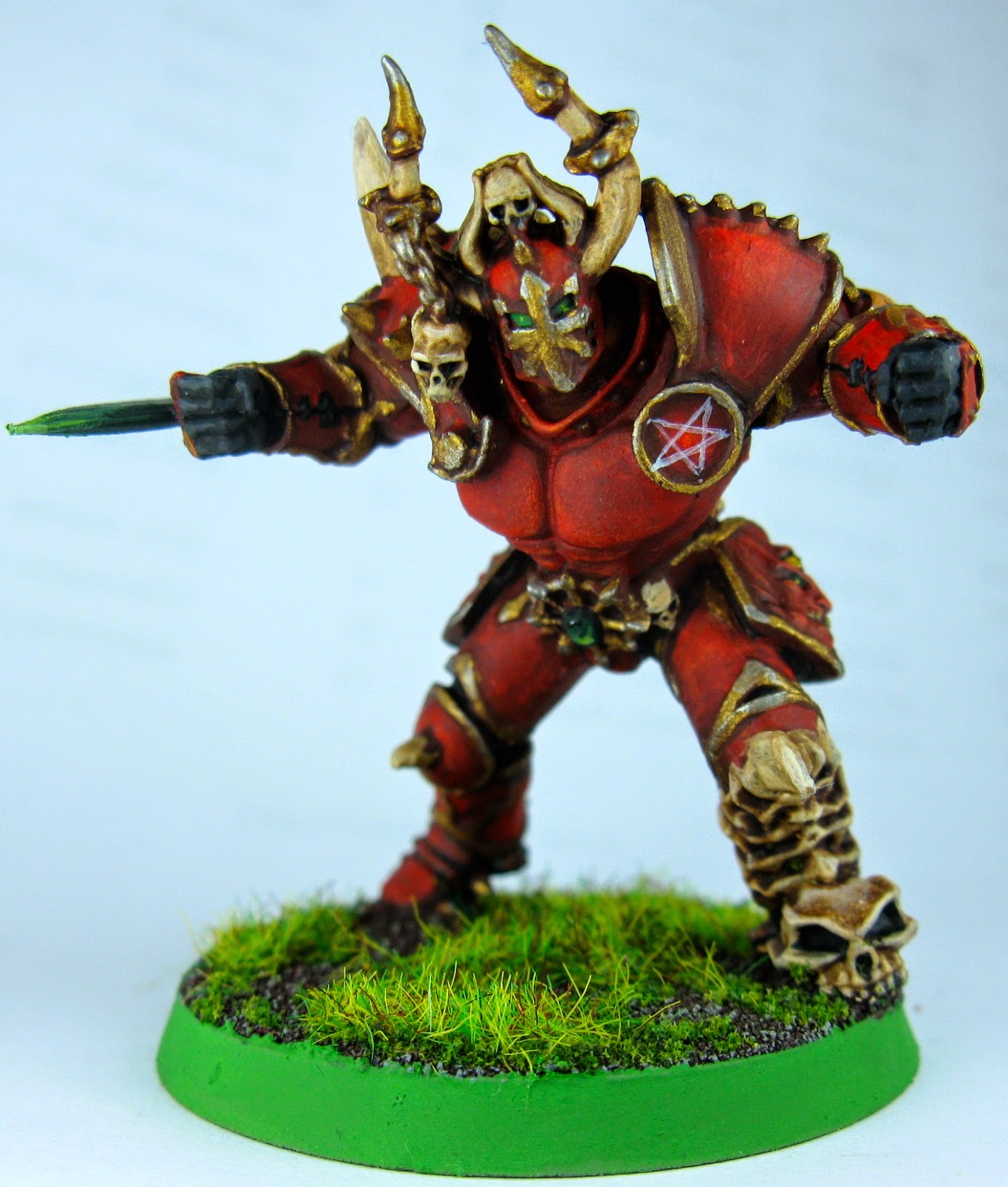 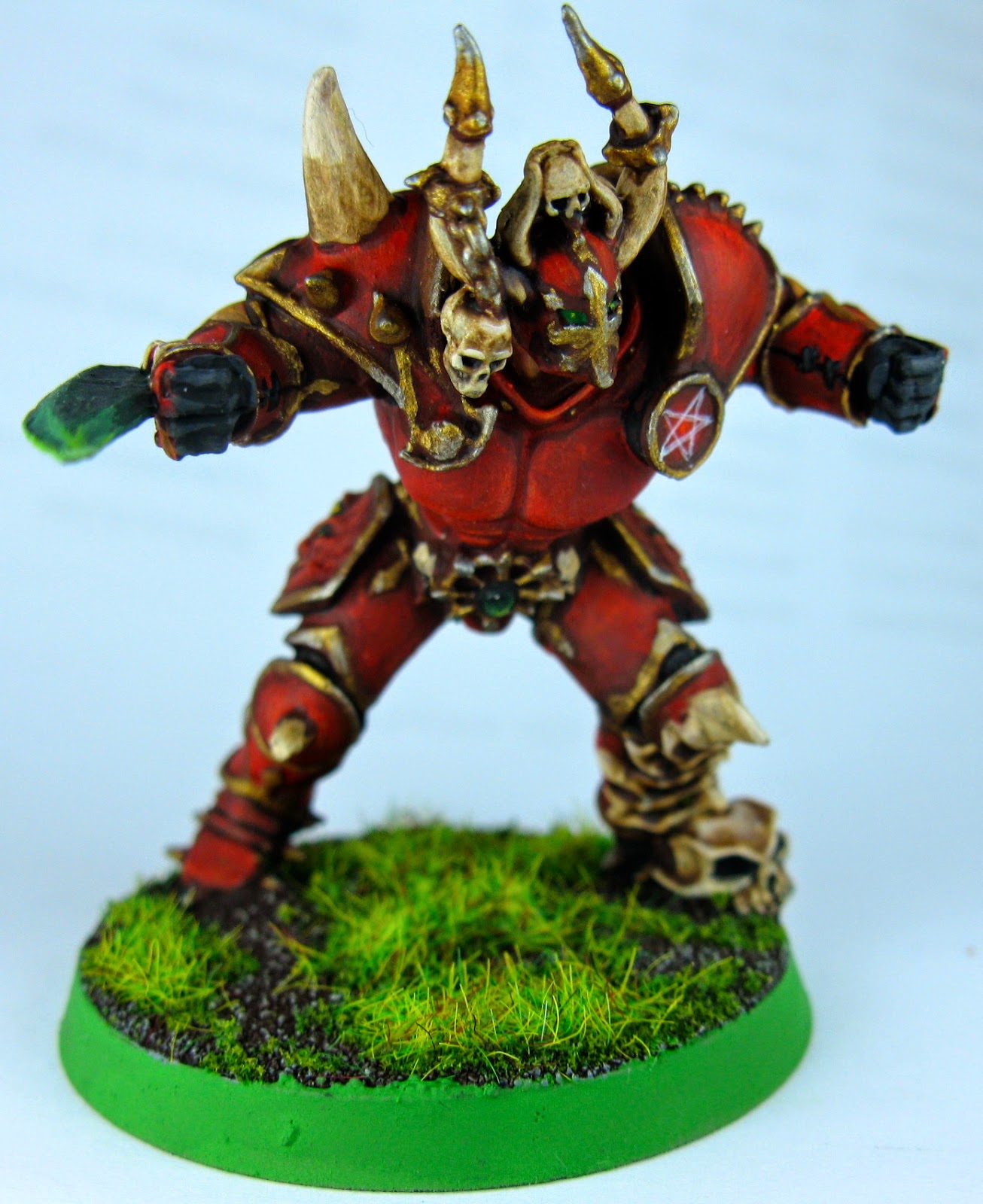 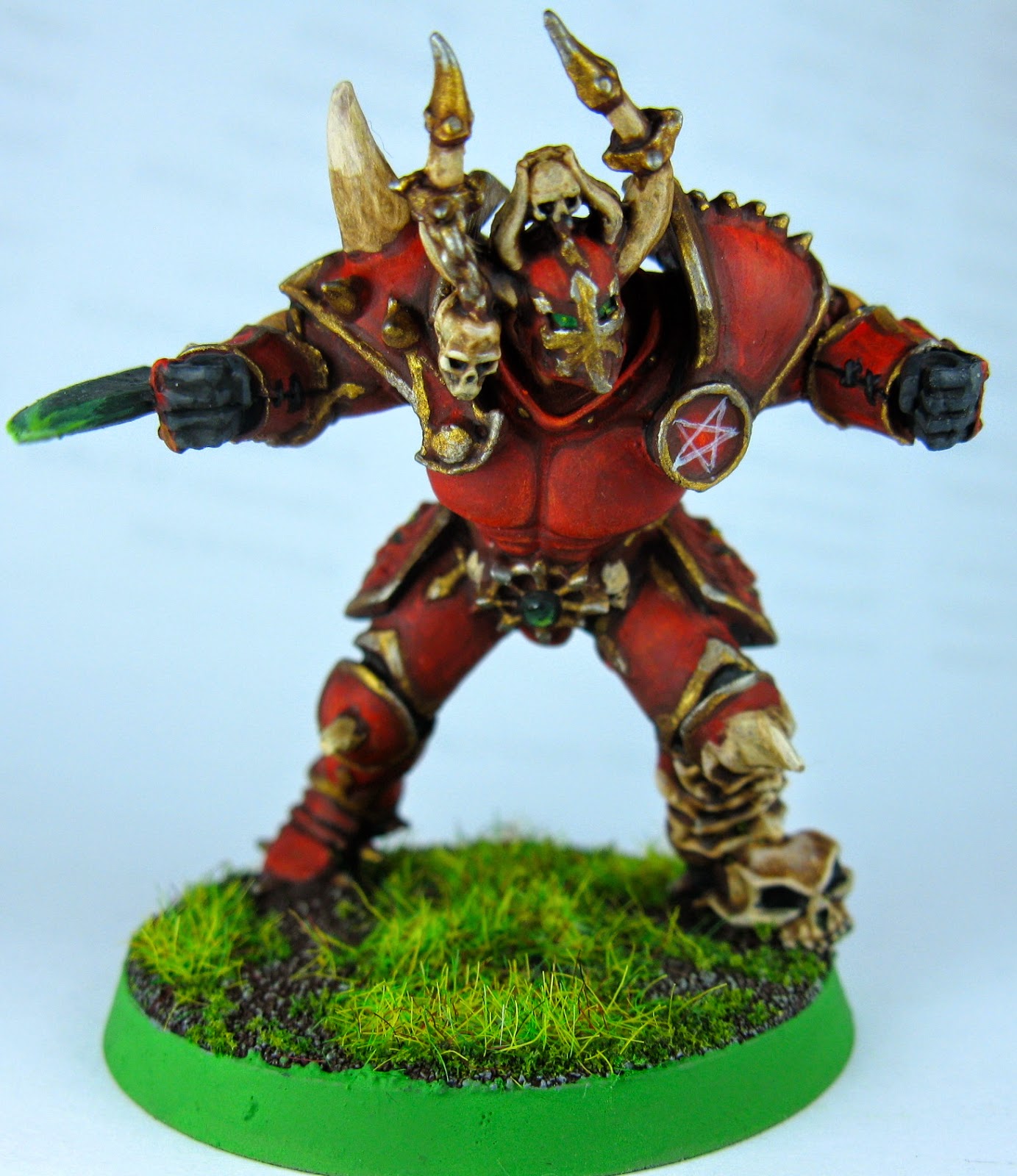 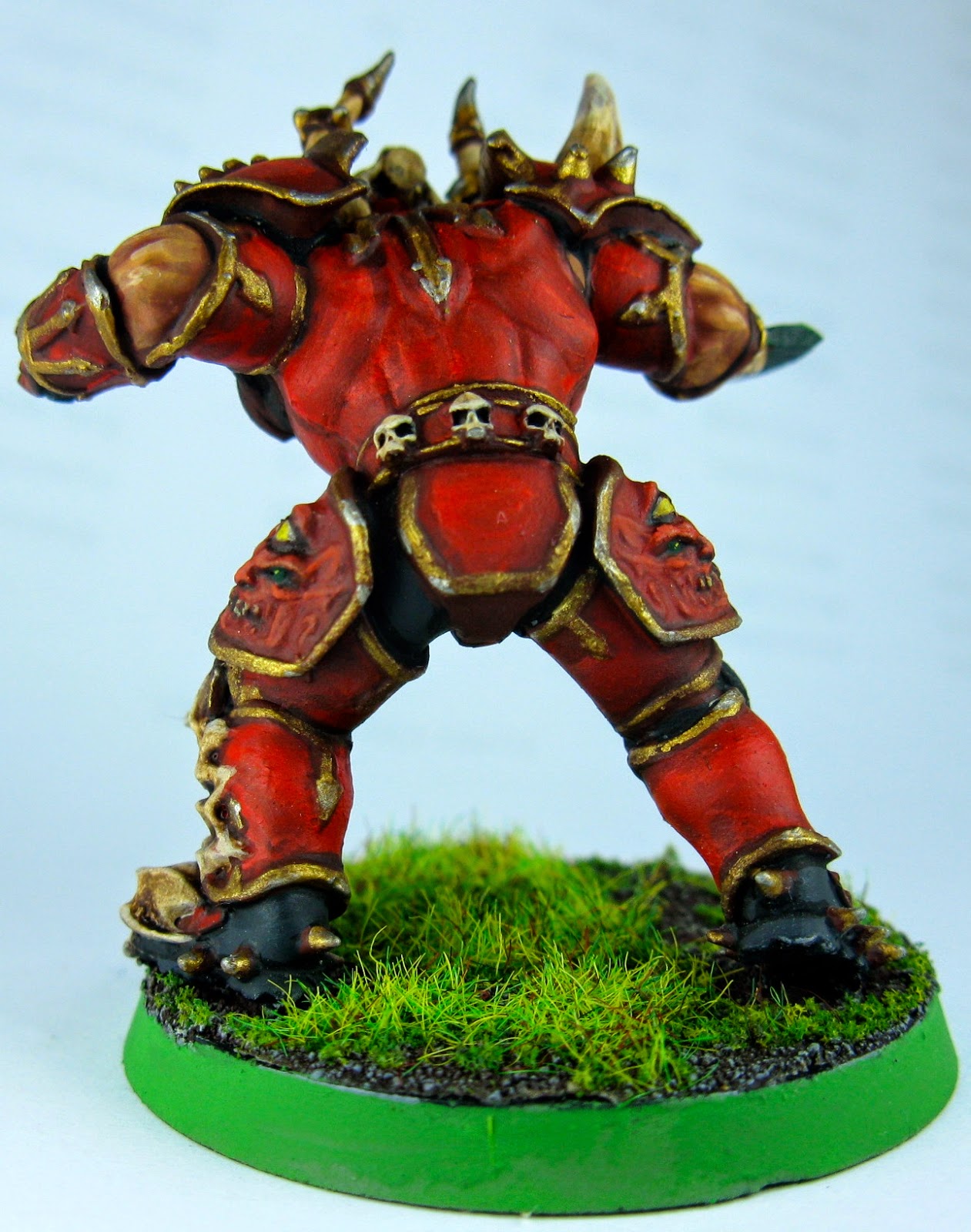 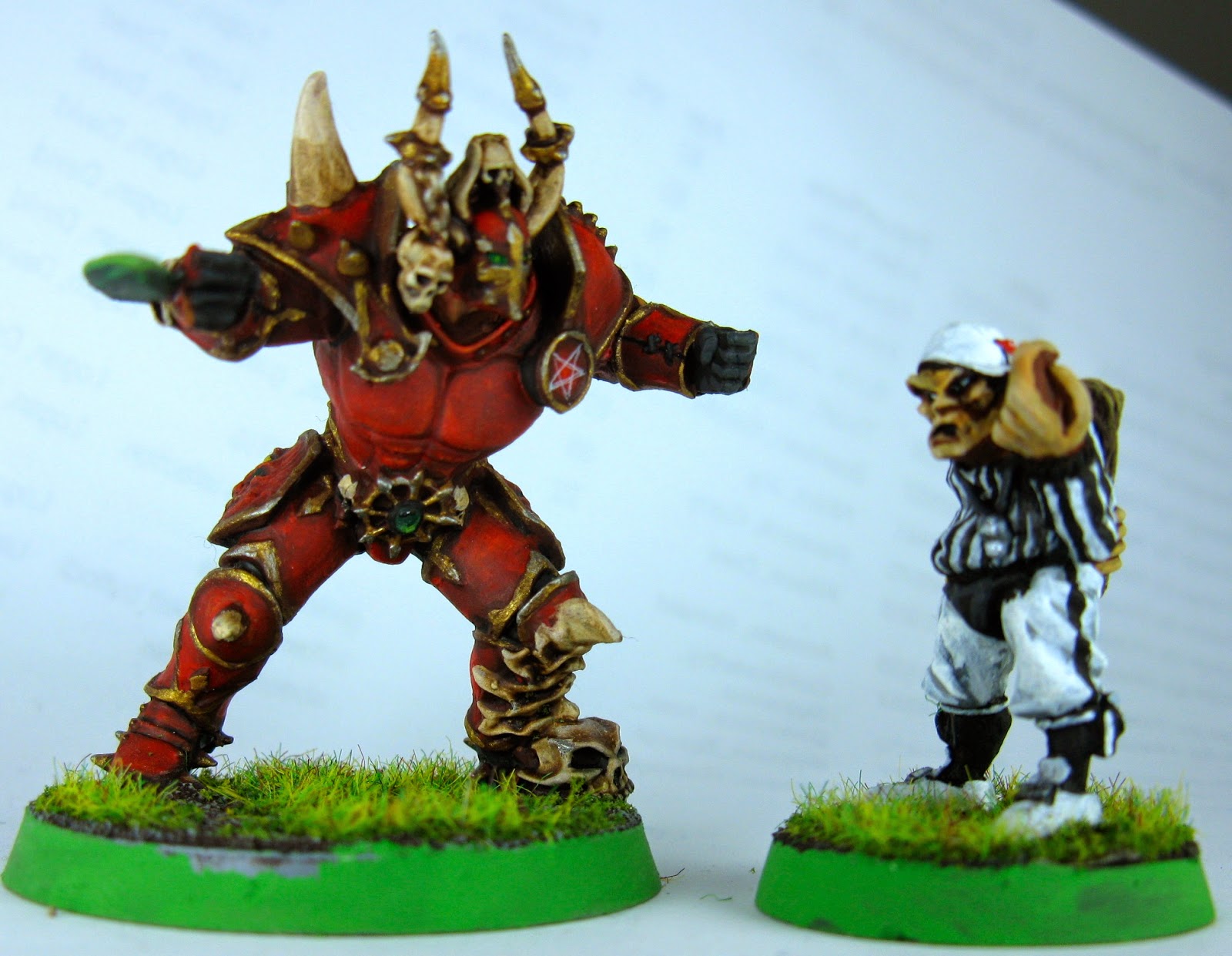 I didn't enjoy painting him as much as Tentacle Man, but now he's done. There was some poor casting around the helmet and left arm, unfortunately, which I filed down a fair bit. I greenstuffed a gem to his belt icon. I wasn't sure how to do the spikez on his right shoulder and knee- bone or brass? I went for bone. I also meant to add a skull to his base, but forgot. I may come back and do that later.
Posted by Barks at 15:07 4 comments:

Where there is discord- Falklands war report

I acquired a copy of the boardgame Where there is discord. This is a solitaire boardgame about the Falklands war, focusing on the political, naval, and aerial campaigns. There is a degree of abstraction throughout, but palpable tension as air raids target your thinly spread escort ships. The key player aims involve maintaining domestic government confidence and public support, keeping international opinion high and sanctions in place, and adequately defending the Task Force from air strikes, Exocet missiles, submarines, and the threat of Argentinian warship forays. All in a timely fashion, with limited assets in the harsh South Atlantic.

I didn't take any pictures of the game itself (it is a bit abstract) but did keep a log of events and enjoyed making the following report. Click to embiggen. 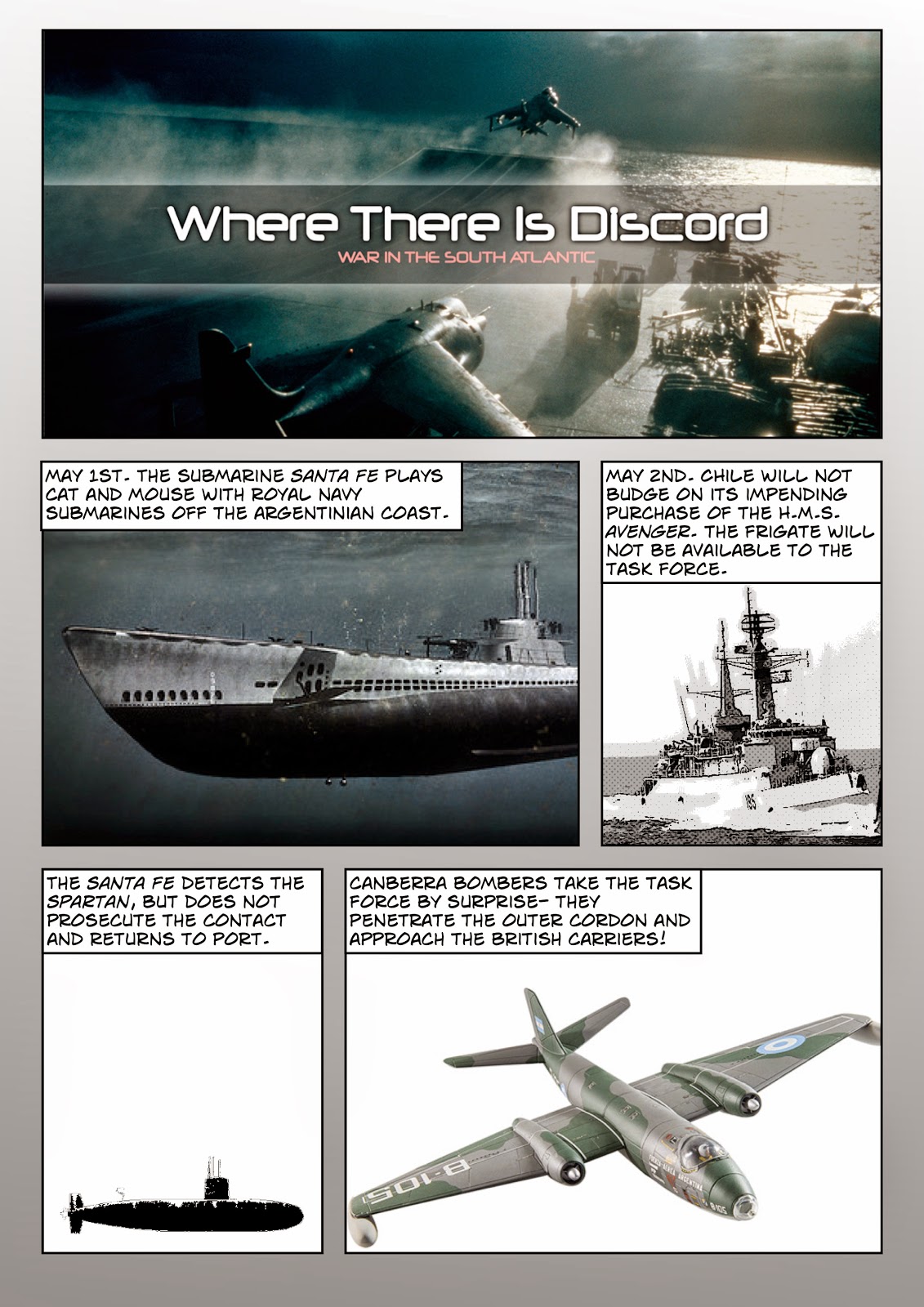 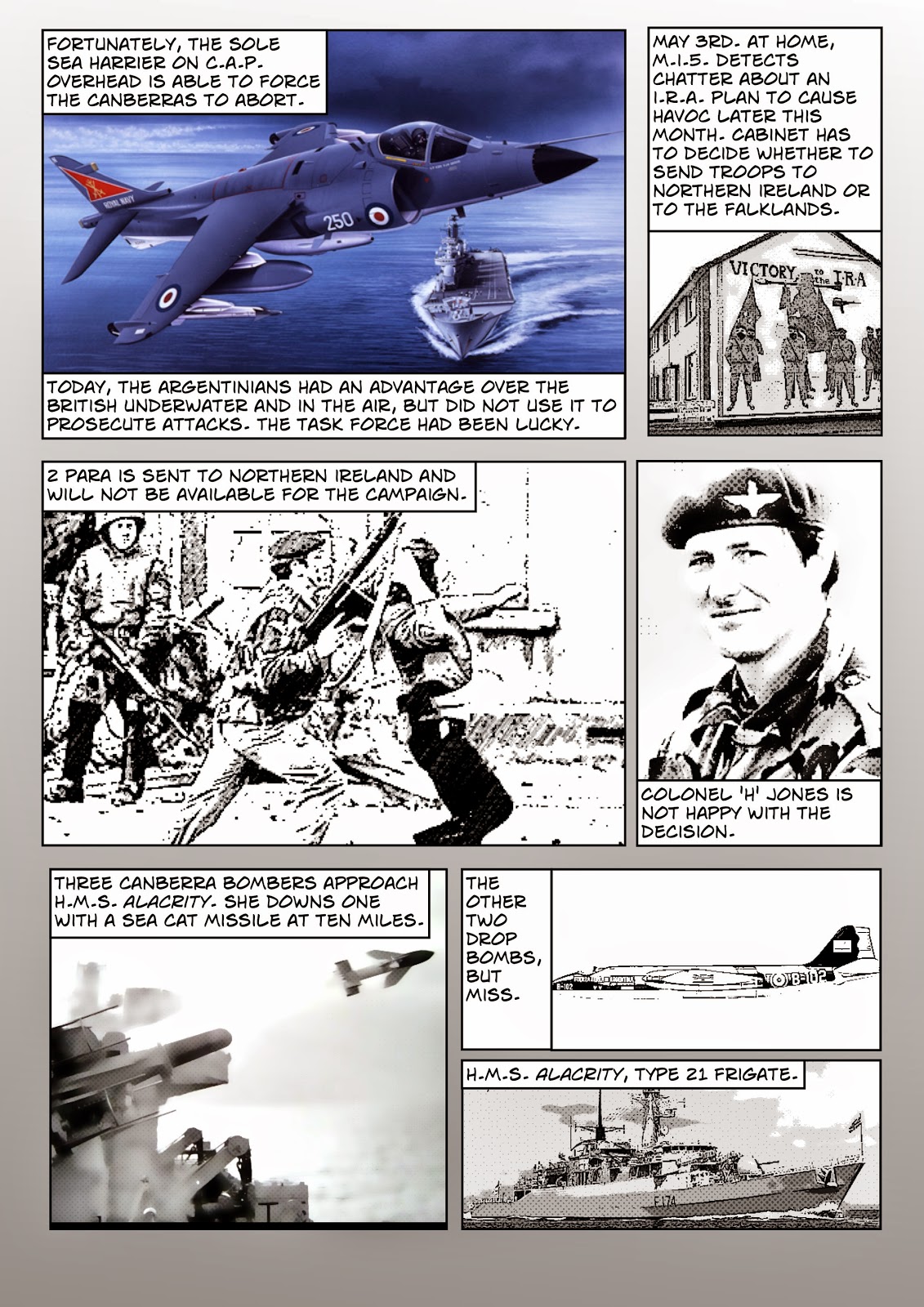 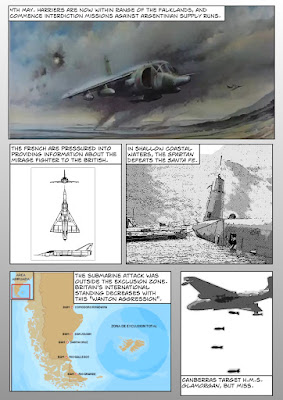 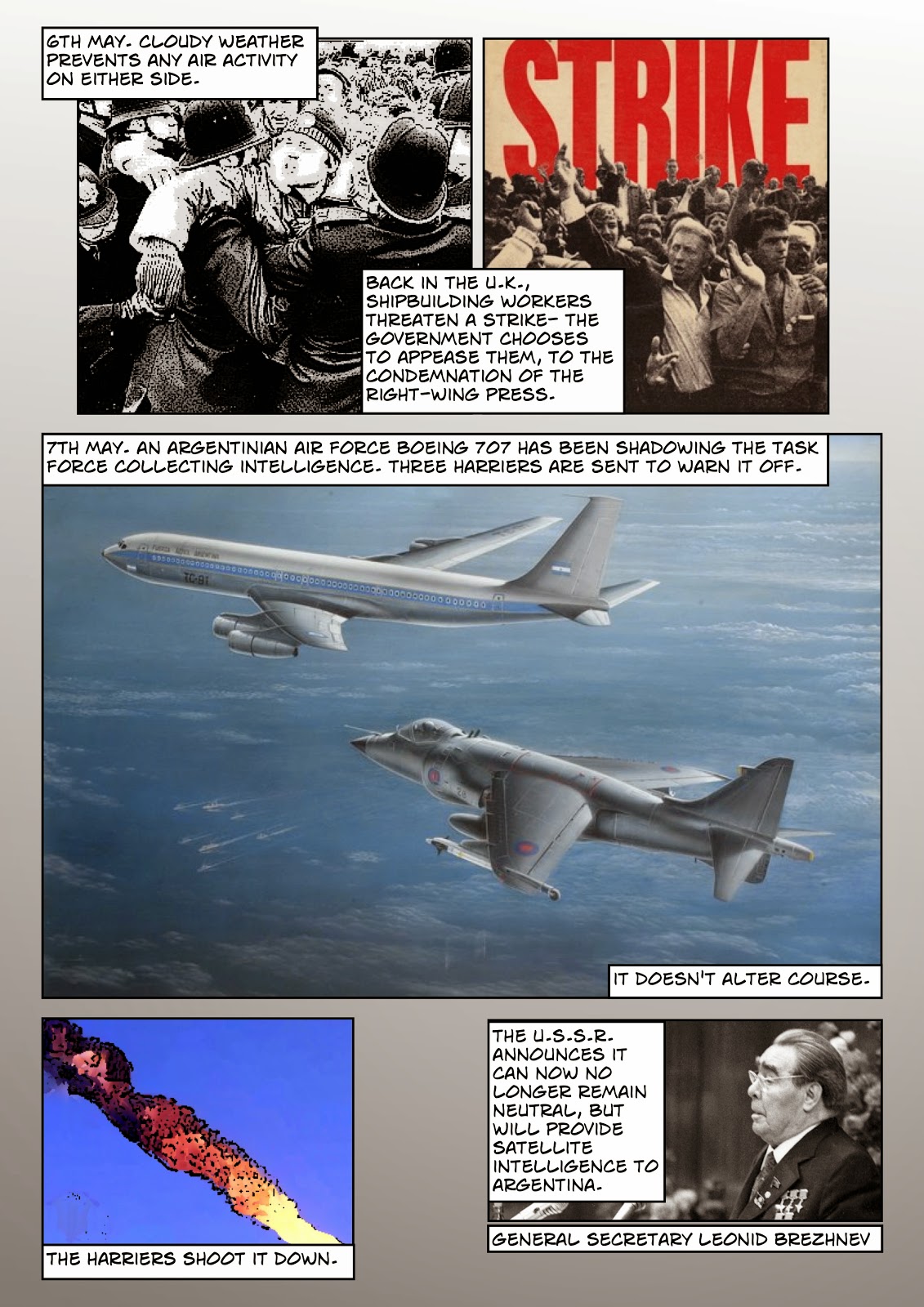 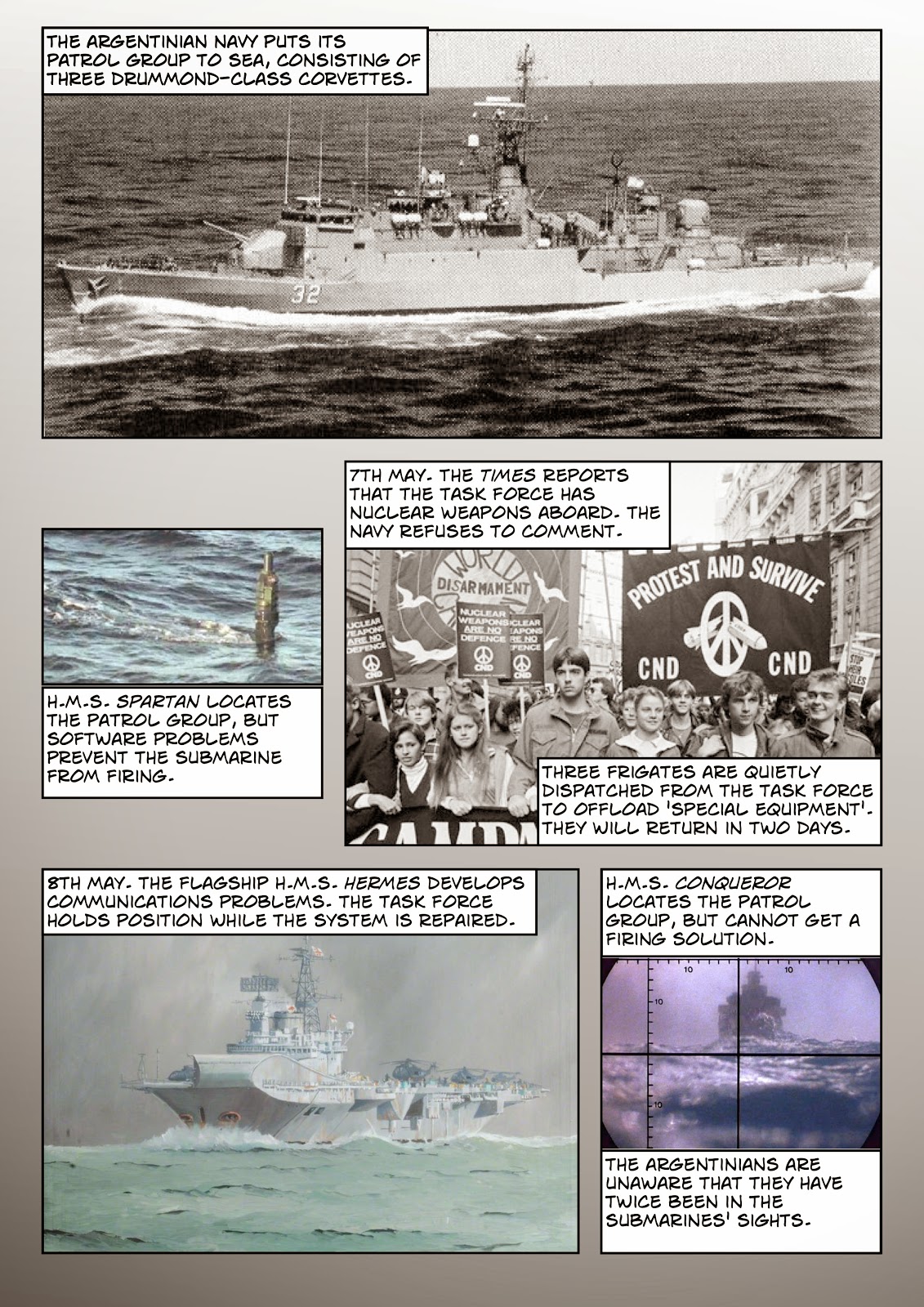 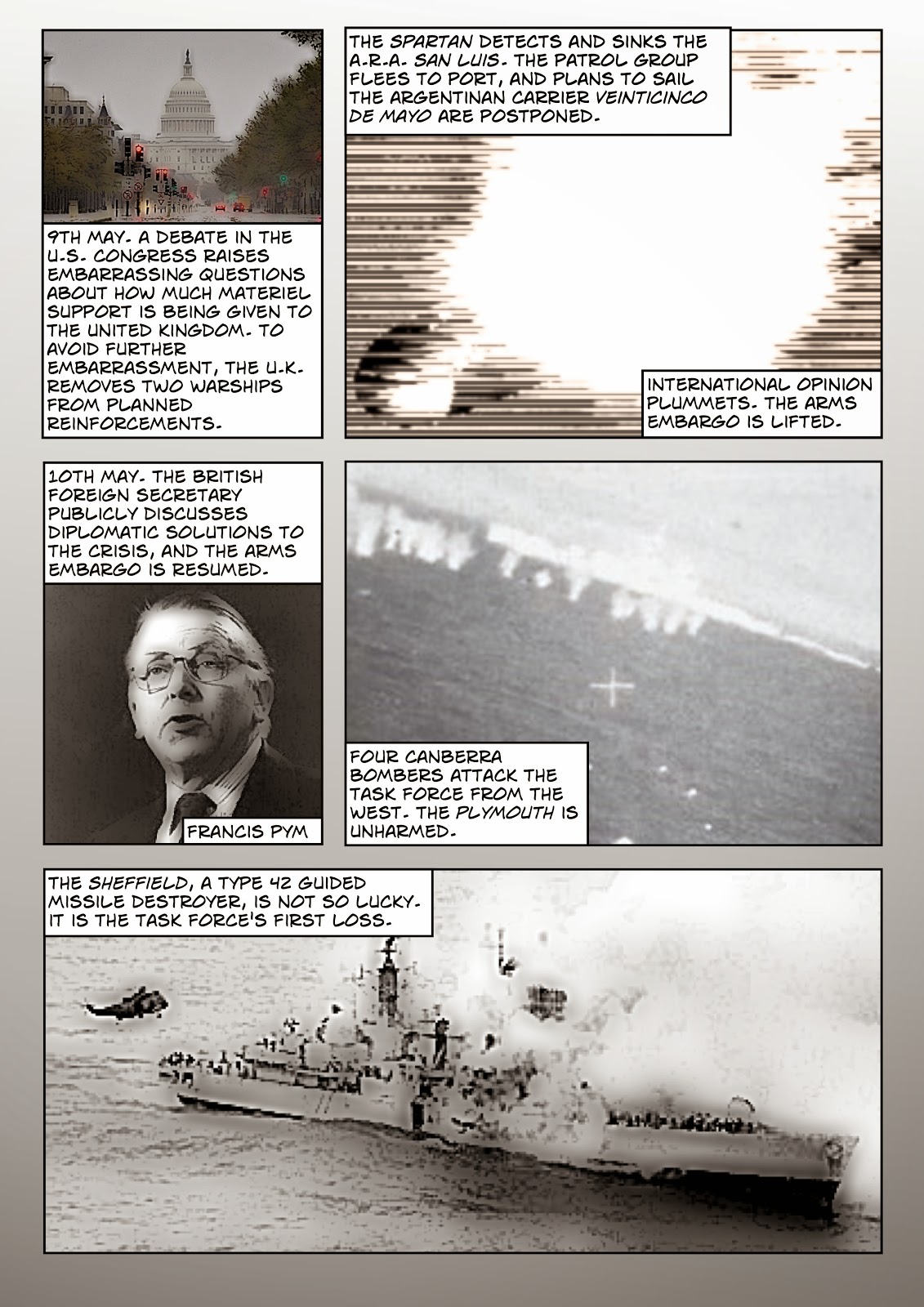 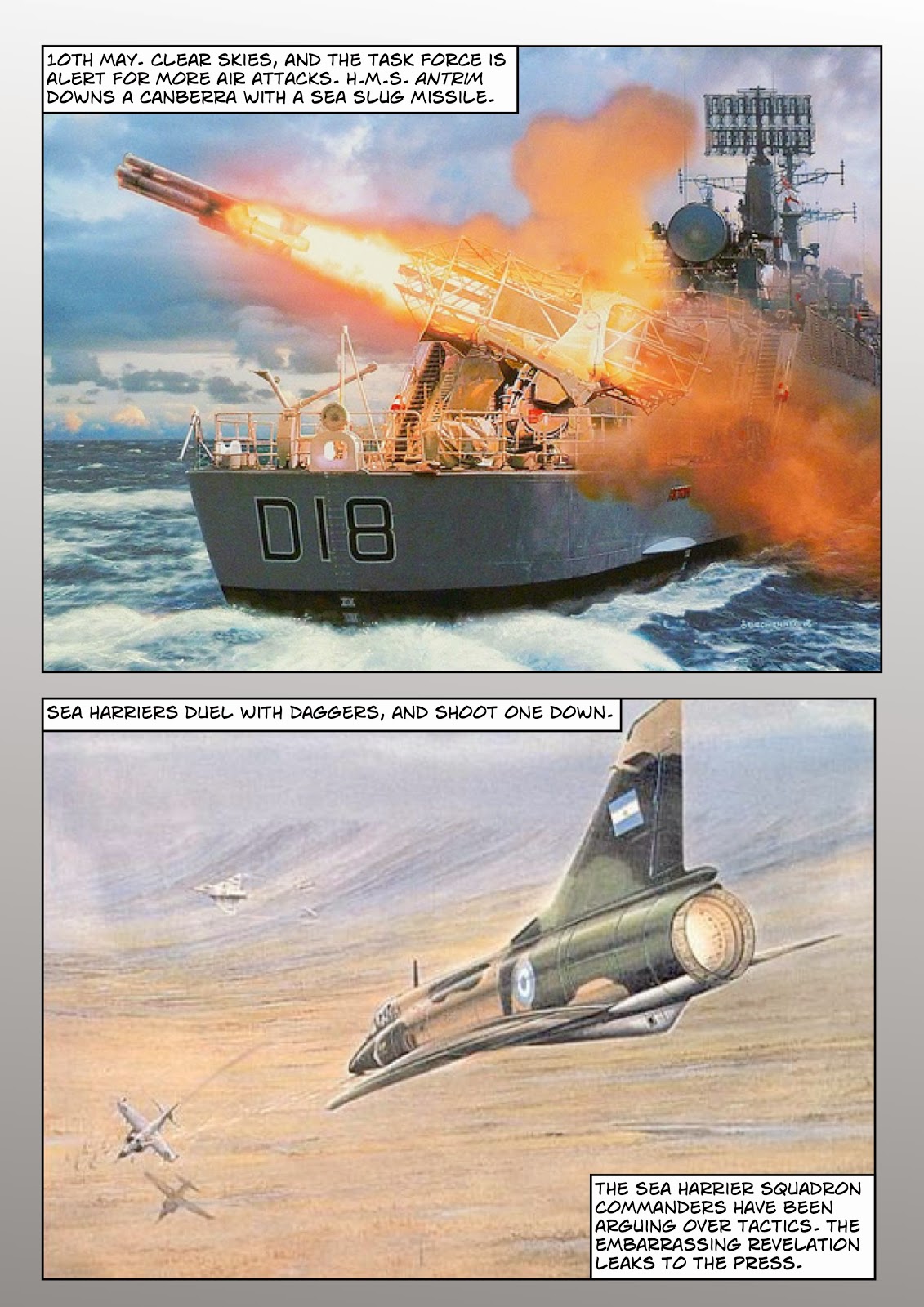 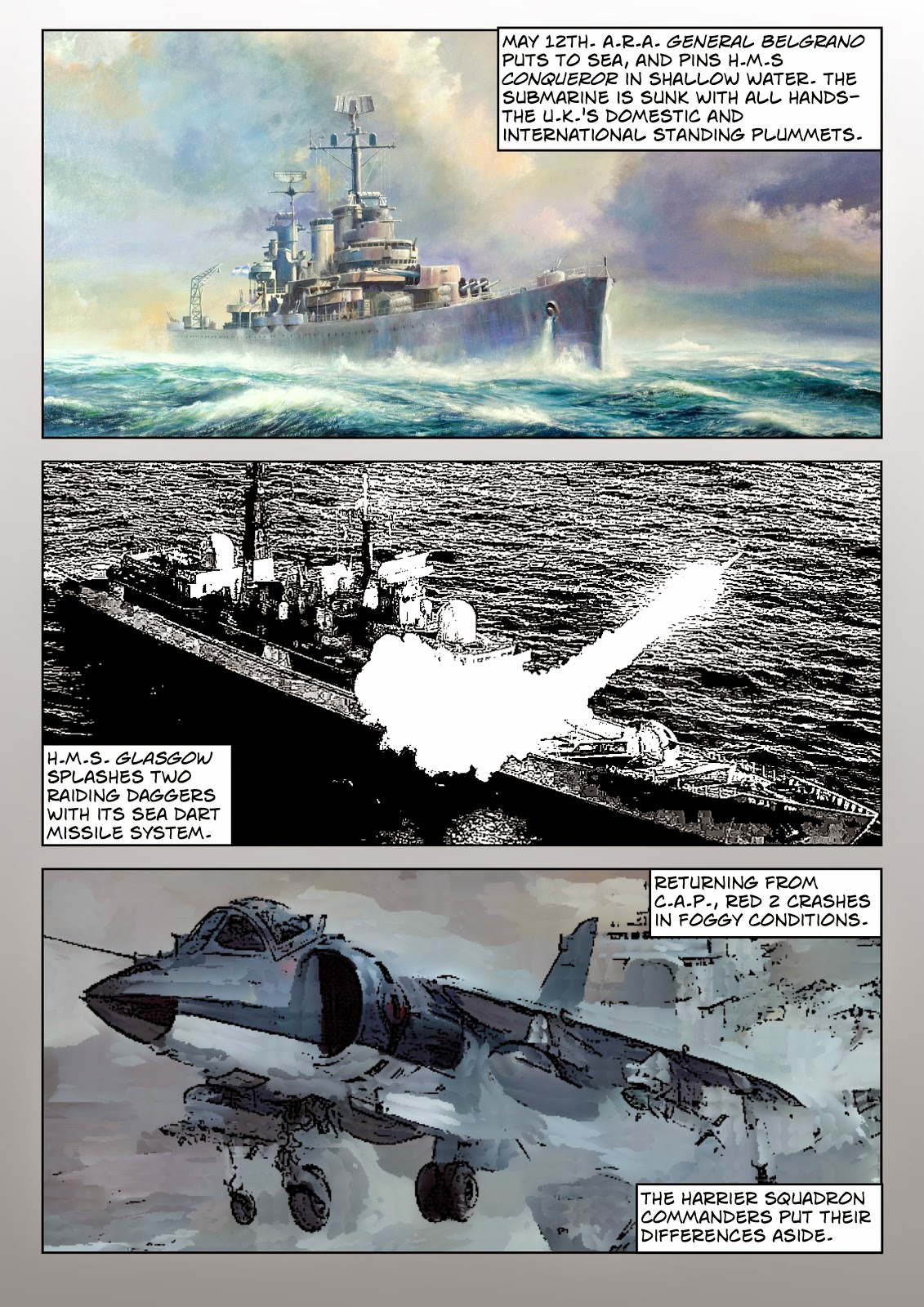 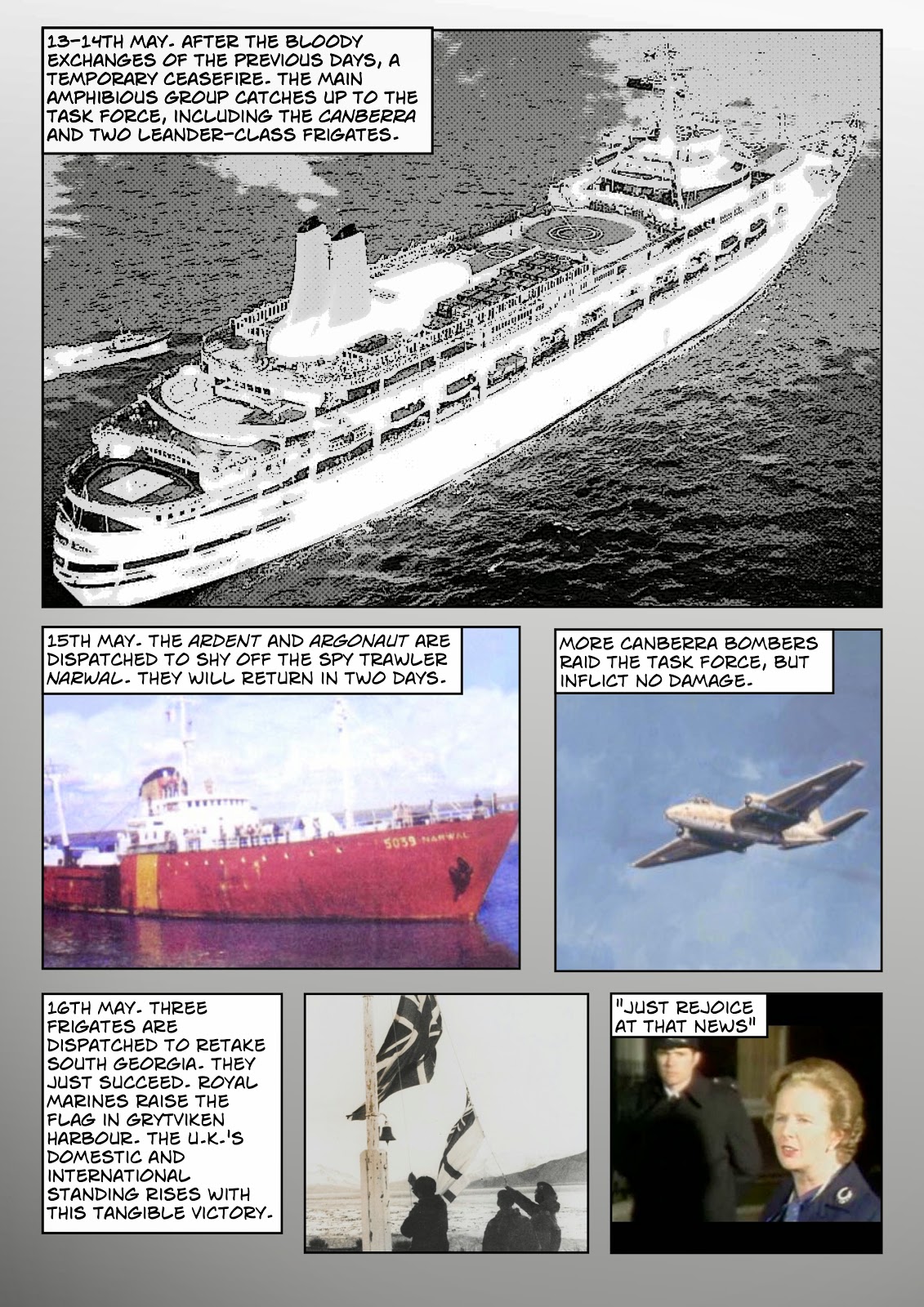 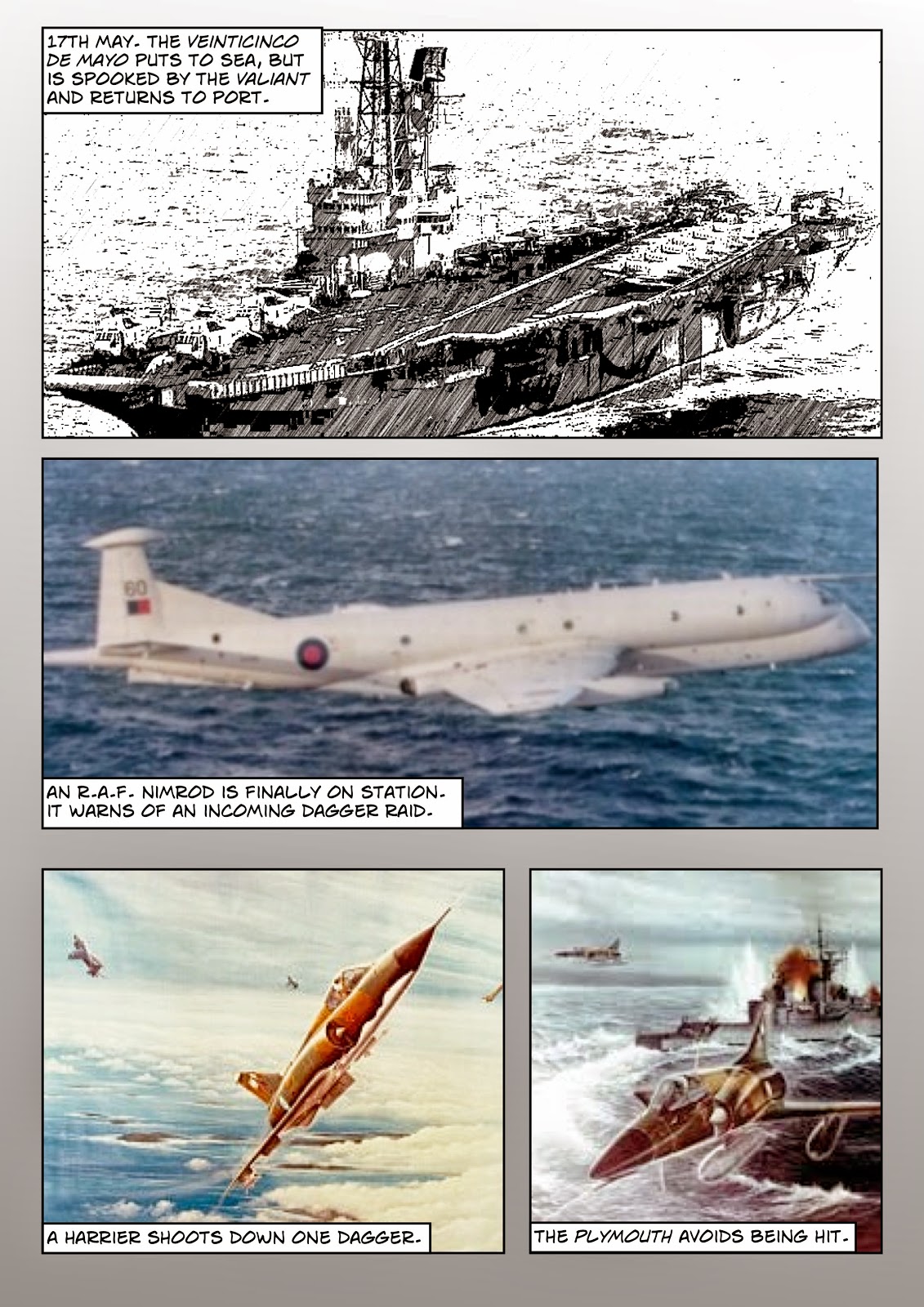 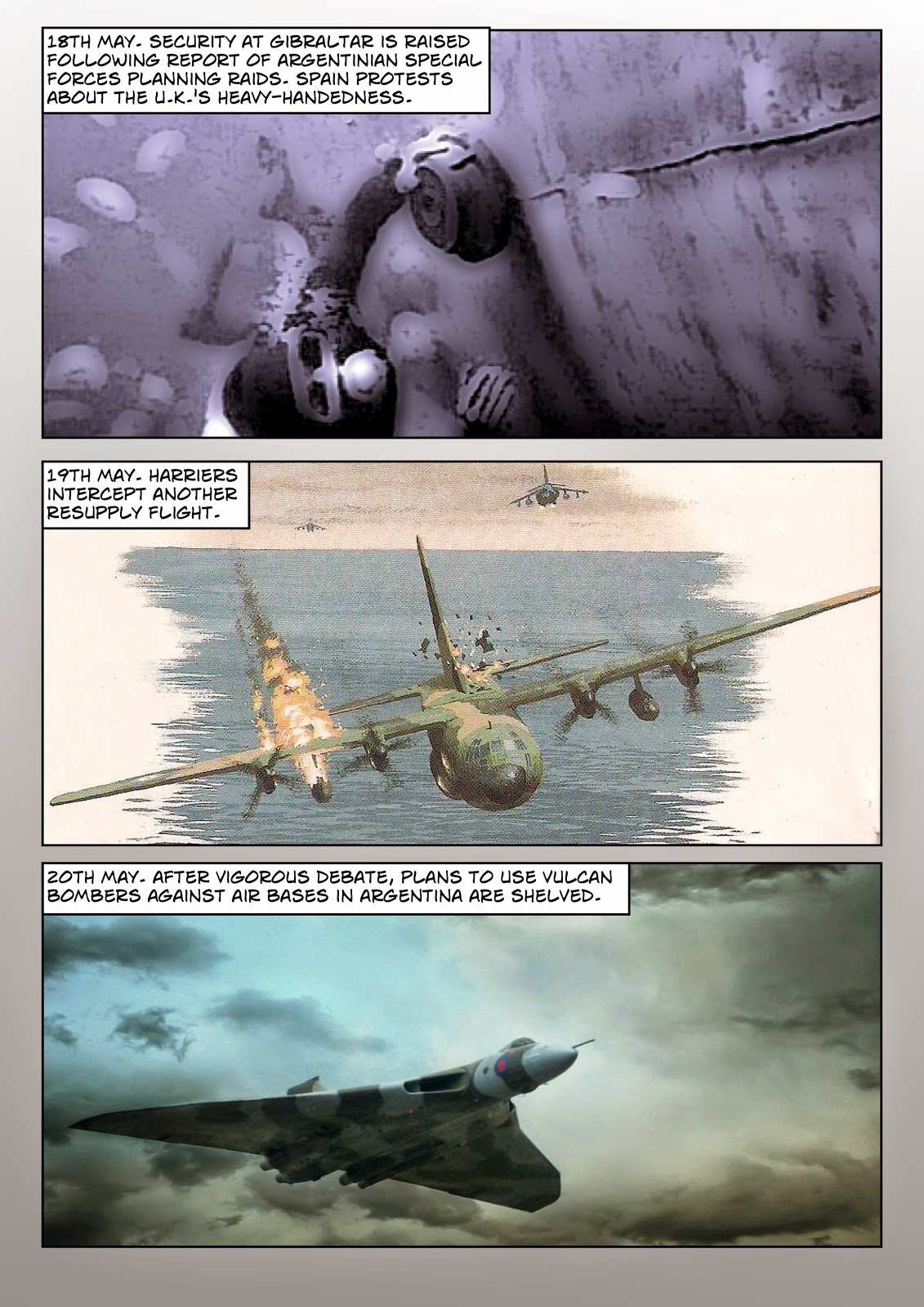 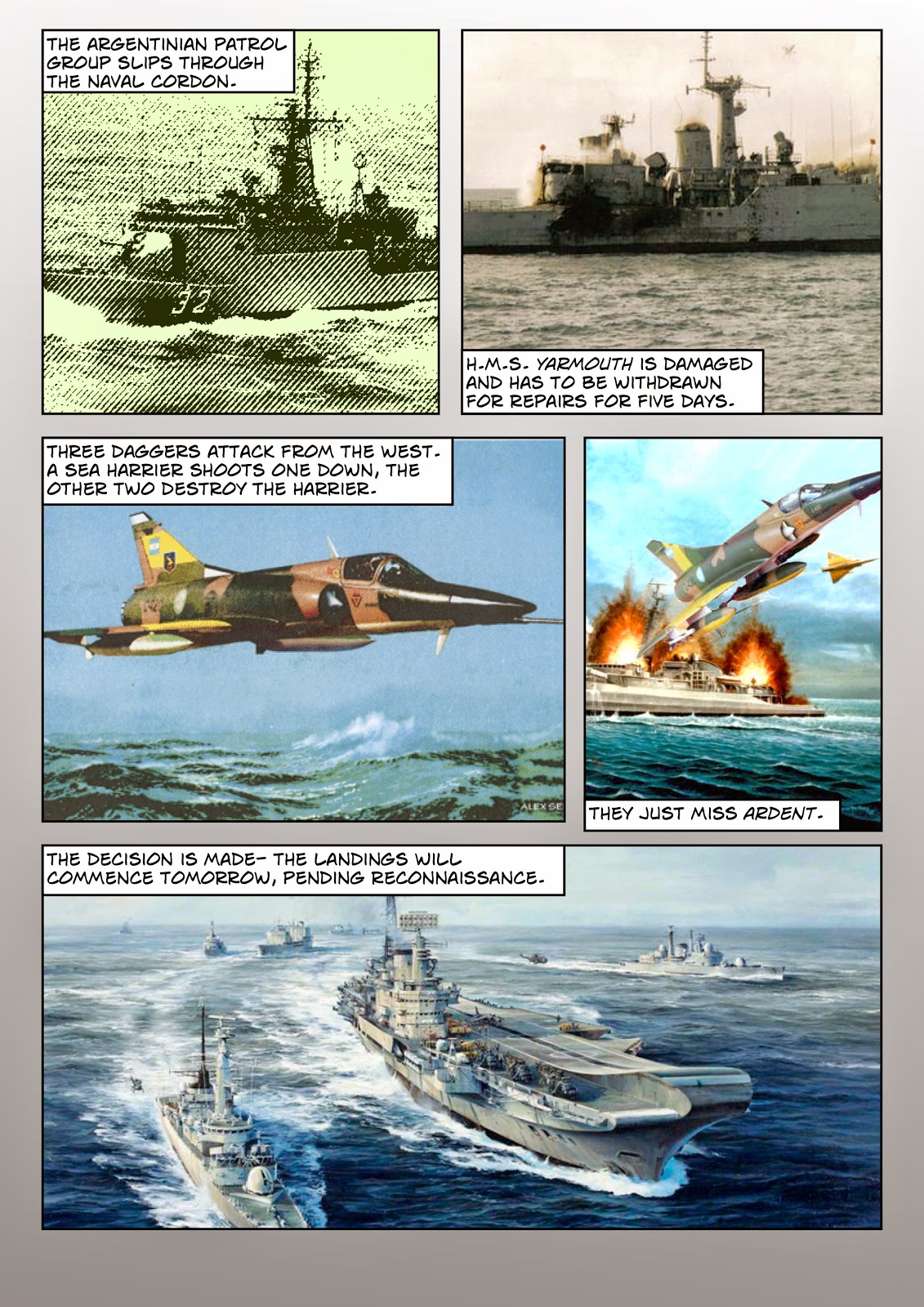 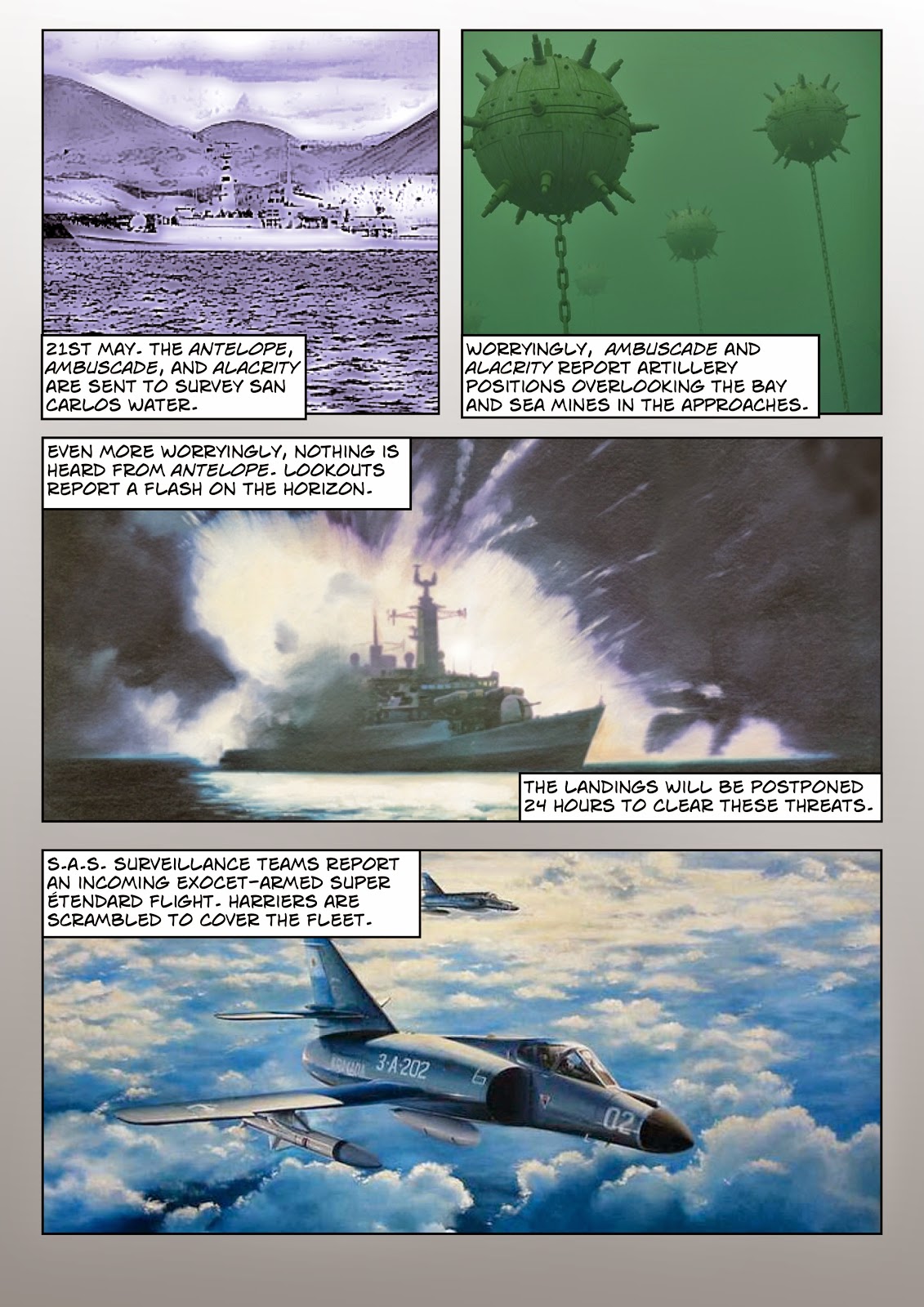 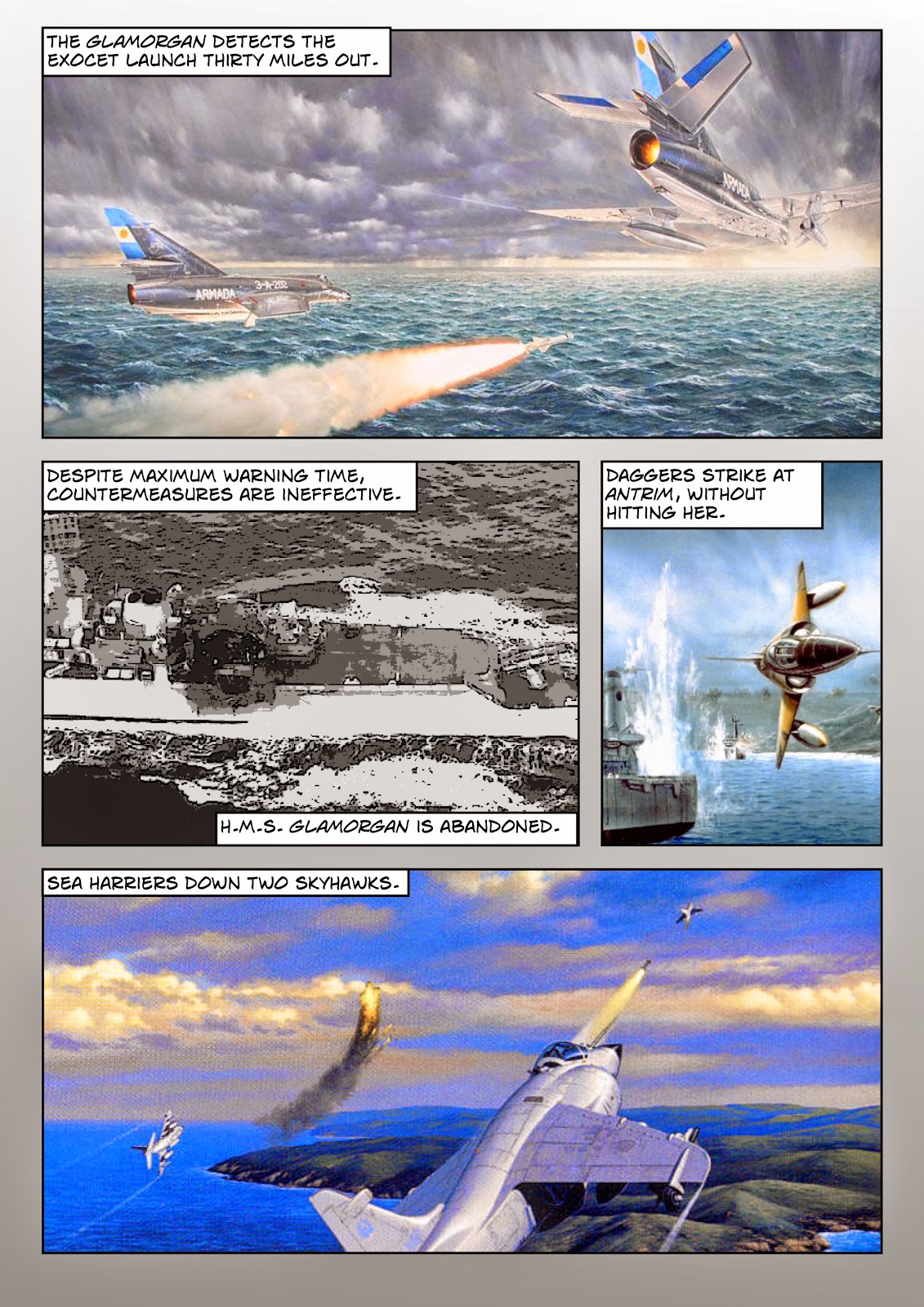 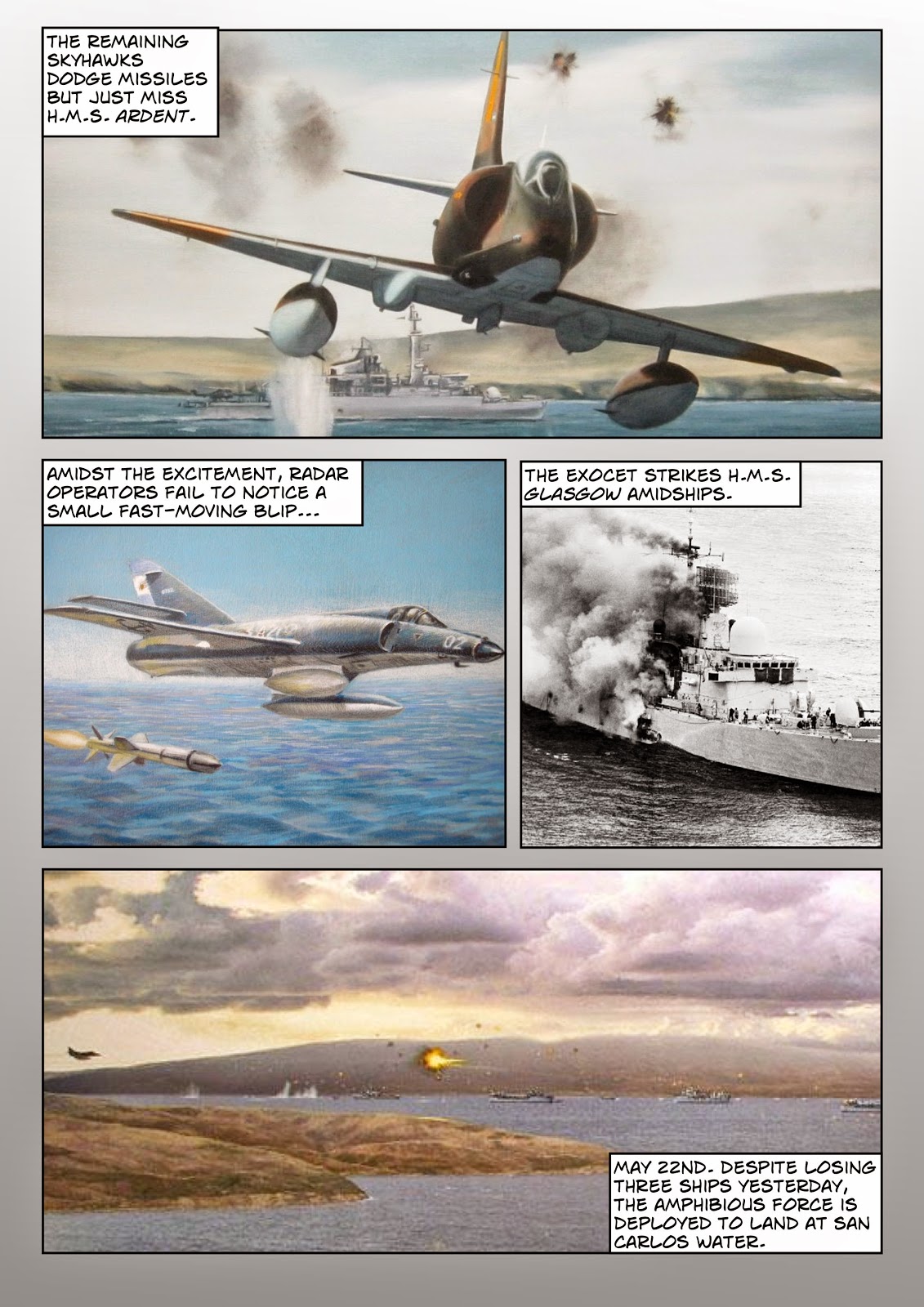 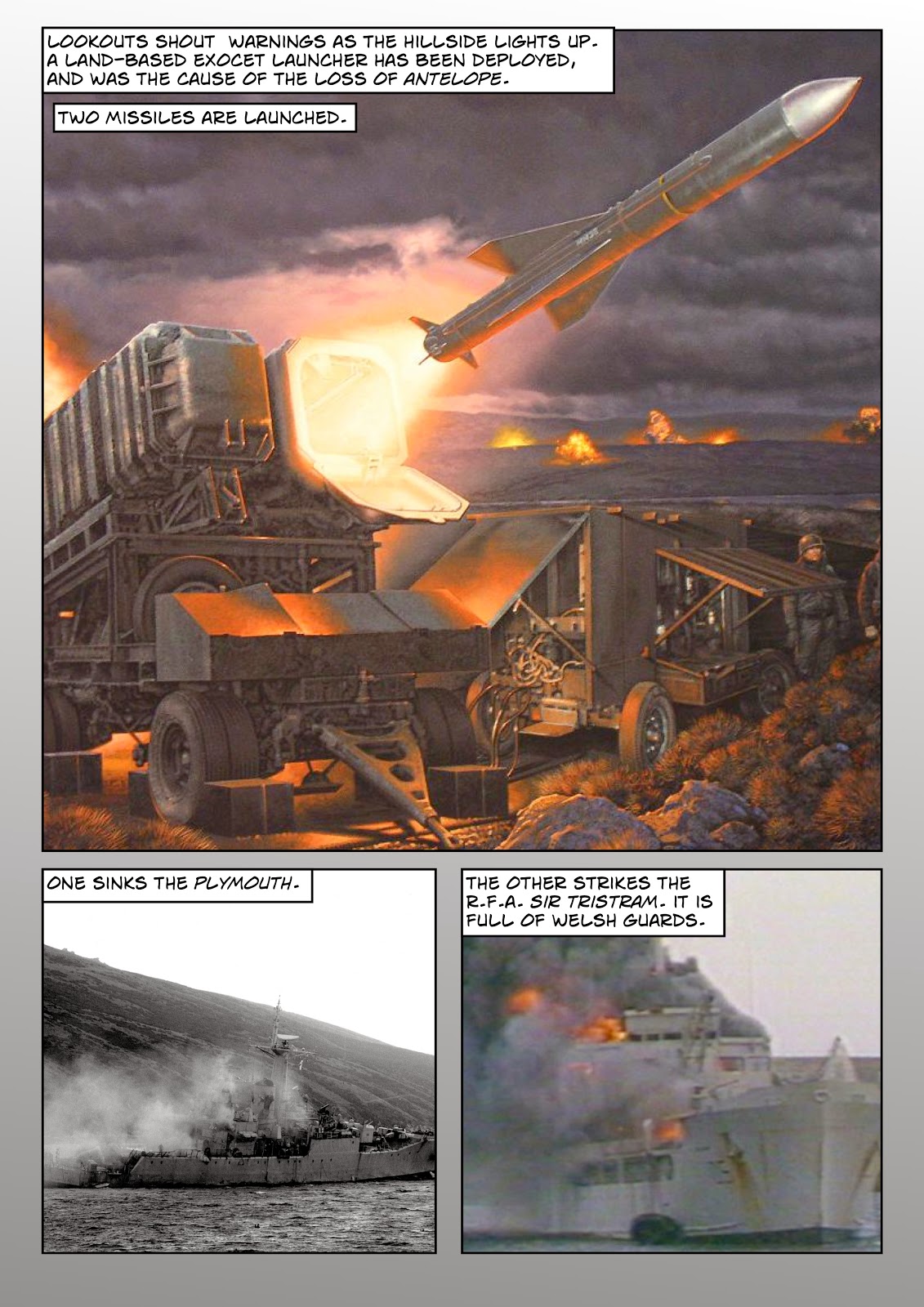 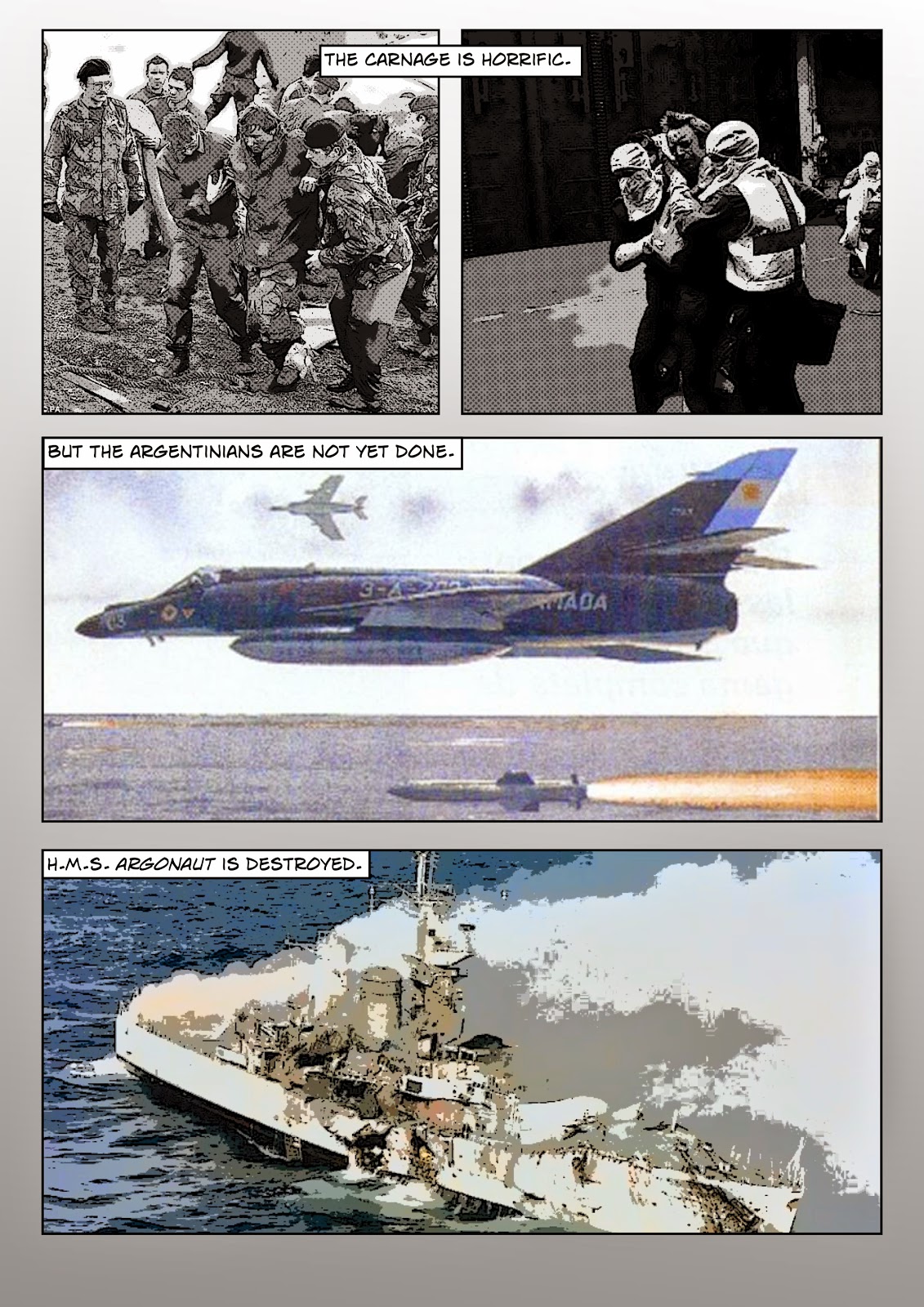 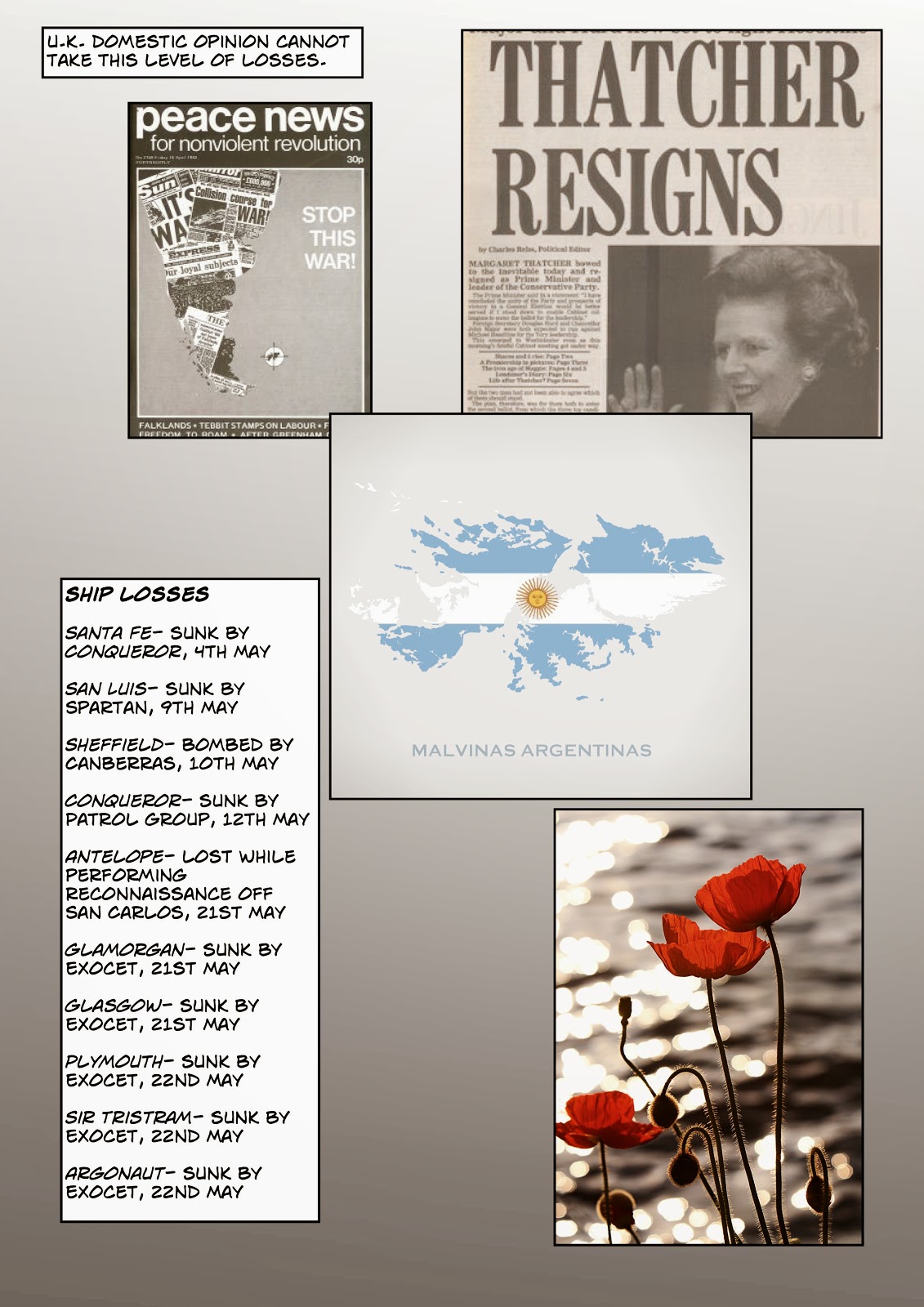 What a fantastic and ultimately sobering game. Where there is discord tells a compelling and realistic ‘what-if’ story, where the player makes high level political and military decisions (always trying to choose the lesser of two evils), then watches the ramifications play out via dice rolls. The tension as aircraft approach closer and closer to your ships, while radars fail to lock on- oh my! I think I played a fair first game, balancing military and political needs while getting to the islands in fair time. Retaking South Georgia was the highlight. Losing Antelope, Plymouth, and the Sir Tristram full of Welsh Guards to land-based Exocets was a brutal yet plausible way to lose. I was grossly under-supported by the RAF Tridents, and realise I didn't make optimal use of my Harriers. If I could do anything differently, I would not have been so aggressive with my submarines early on, as they swayed international opinion against me fairly early and subsequently made life that much harder (note, however, that they forced the Argentinian navy to stay in port for most of the game). Highly recommended if you have an interest in the campaign.

All pics via Google Images. I was pleasantly surprised how much art there is covering this conflict. I used Comic Life 3 to make to make the report.
Posted by Barks at 10:07 21 comments: