Three go mad in the woods

I had another game of Mansions of Madness recently. We replayed the survival scenario 'A matter of trust', on a variant board from last time. Would this time end any better?

As Ashcan Pete, I found a sniper rifle, but never got to use it- I was having more success beating cultists over the head with a shovel. Meanwhile, Mandy Thompson went mad and set stuff on fire, luckily including several cultists. Unluckily, she also set me on fire and I burnt to death* (again...). But then she was overwhelmed, and a cultist ate her face. Her sacrifice, however, bought time for Michael McGlen to run away- he'd already dropped his tommy gun in a panic and gone insane (who wouldn't after barely defusing a landmine they'd stepped on?). But he couldn't run from the flying Mi-Go, which picked him up and dropped him to his death... 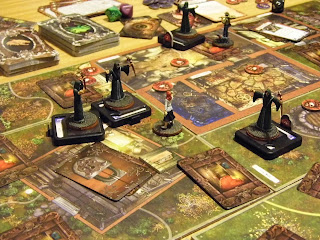 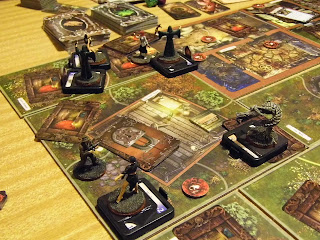 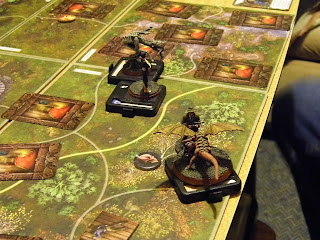 * whilst I was holding a fire extinguisher! Oh, the irony!

Pics from The Dwarven One

Meanwhile, can you hear the sound of another project?

A little short to be A Certain Fellow?

These Certain Fellows have been a badly kept mystery. 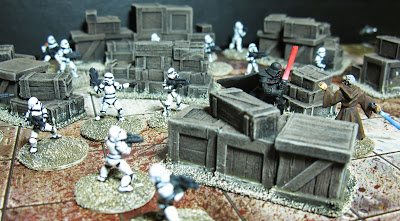 You get five in a pack, with separate heads. There is a pack with a commander and two heavy weapons troopers.

The figures were cleanly cast, but the heads were frustrating to attach (I just used cyanocrylate). I was lucky not to drop a head whilst assembling them, and I'd never have found it because tiny. I had thought I'd go for a white undercoat and paint the creases etc. black, but changed my mind and went black undercoat with white armour plates.

The helmets are beautifully detailed, and, though frustrating, the separate heads give you a lot of variety with identical poses.

The problem is, they're small. I'll still game with them, but they do look a little on the short side. Here they are with some Space Pals.

Overall, they do capture that iconic look and are instantly recognizeable.

Just a quick one today, and moving away from the recent spate of 28mm and Blood Bowl posts.

By Dagger or Talon, the first supplement for Tomorrow's War, was just released.

I'm chuffed to say that one of the many illustrations is of my humble GZG Crusties. There are many beautiful and inspiring pictures in the book, and it's really nice to be included amongst them!

Eucalyptus Bowl is Australia's, nay, the Southern Hemisphere's self-declared biggest and best Blood Bowl tournament. It's been running annually in Sydney since 2005.

The format is six resurrection games over two days, with a 1.2m roster including skills and inducements (no doubles; max. one skill per player; no inducement cards). This year, I took my new team, the Vampire Bite Club. Four Vamps (three with Pro and one Strip Ball), eight Thralls (two Wrestles, two Fends, two Sure Hands, and a Tackle), with three Rerolls and Fan Factor 1.

The venue is excellent; the function facilities at the Burwood Club. There were sixty-five coaches slogging it out to be numero uno (spoiler alert- it was Thomsy with five wins and a draw). On the large screens there was a slideshow updated with rankings, draws, remaining round time, etc. The organisers (Virral and Rabid) moved around making sure every table had a bowl of sugary goodies. Being a club, of course, there was cheap beer, coffee, soft drinks and food. Undoubtedly the highlight of anyone's Blood Bowl year.


There was a table of glittering prizes, allegedly with a total value of $5000. After the winners have received their trophies, everyone lined up in their final rankings to take a prize of their choice. Noone left empty-handed.


Even before the prizes, all coaches received a pack with a custom dugout, a mini-printed rulebook, custom scatter templates, a frill-necked lizard miniature, a resin die marker, a set of Australian BB dice, a commemorative coin, and Eucalyptus Bowl 2013 dice.

There were "Unlucky door prizes" for the first coach to kill one of their own players, fail a touch-down on a go-for-it reroll, roll a triple skulls, roll double skulls- reroll- double skulls, etc. Every coach had to nominate a rostered player as 'Boggy', and there was a reward every round if you killed Boggy or if he scored. This means that even when you're losing, you're still in the running for fame and fortune.

All up, it ran very smoothly, and was great to catch up with all the other coaches I have met over the years.

But how was my tourney, I hear you cry? I think I may have muttered the word, "Dismal...", on several occasions, and asked many people to remind me never to take Vampires again!

I knew Vamps were going to be challenging, but thought if I played conservatively with plenty of Pro, lotsa rerolls, only four Vamps, and thoughtful placement of thralls and tactical use of Hypnotic Gaze, I'd give them a red-hot go. How naive... (When I told Rabid I was taking Vampires, his face turned from disbelief to pity- I kid you not).

My first game lulled me into a false sense of security. I played Carbrawn's Khemri, Tomb Raiders. In true Khemri style, he never picked up the ball and I was 2-0 up at half-time. I held this lead in the second half, and won a comfortable 6-2 casualties. This put me on Table 3 for Round Two. The high-water mark.

Round Two was against Darquebus. His Halflings had trounced me embarassingly at Biff in the 'Riff two weeks ago, and now it was time for payback against his Orcs, the Organic Rekkin' Krew. But it wasn't to be. I had nothing. He smashed me 4-0, 3-1 casualties against. He went on to come second overall. Someday I will have my revenge...

I then went on to play Hacker's Chaos Dwarves, and again, nothing I tried worked. I 'only' lost 2-0, 4-0 casualties against. Suffice to say I was fairly downhearted by this point in time.

Day 2, Game 4. I played Joe's Chaos, the Aurochs of Anarchy. Joe hadn't played for a very long time indeed, and (IMHO) made a lot of rookie mistakes. But that doesn't help when all I can roll are skulls and 1s. I lost that one 1-0, thankful it wasn't 2-0 because Joe forgot about scoring in the first half and was having too much fun injuring me. I lost the injuries 7-0. Yes, 7-0. Joe said two things that stuck with me: "It's like you're playing against my team, and also against your team!", and, "Why on earth did you choose Vampires?" Why indeed?

My mojo returned in game 5, against Jason's Orc Black Fist Pack. This was the most enjoyable game of the tourney for me, and I won 2-1. It really should have been a 2-2 tie, as our teams were evenly matched, but in his final offence my defence held. I lost the casualties 2-1.

My final game was against Babs' Nurgle, Shadows of Depravity. I didn't actually get a picture of this game, but Babs' beast won Best Single Miniature. He beat me 2-0, as yet again every play I tried just fell apart...

So I had two wins and four losses. If I had to re-do things (over my dead body) I'd take Pro instead of Strip Ball, and try to squeeze in an extra reroll- dump Tackle, Fend, and the Fan Factor. Overall, I came "about 50th" of 65, according to Rabid. And that takes me to thirteen different teams played at official tournaments- eleven to go!
Here's the prizes I won, for coming fricken' about 50th: some Scibor minis, a card game, special gold marbled E-Bowl 2013 dice, balls, and few other rare BB miniatures. Wow.

Finally, check out this utterly amazing custom pitch. Every corner was a little masterpiece. 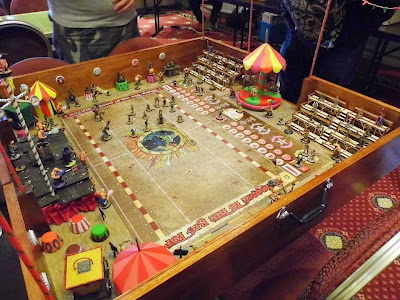 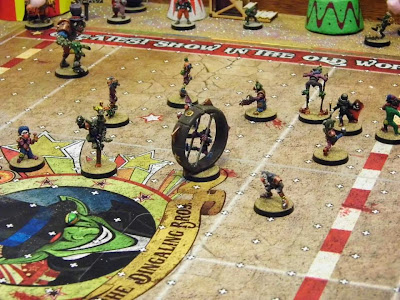 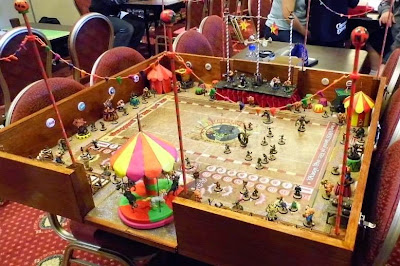 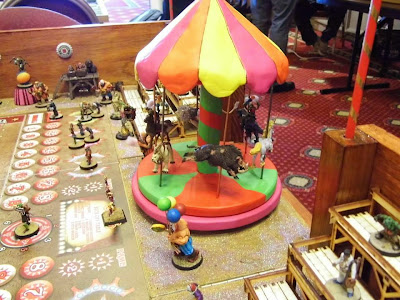 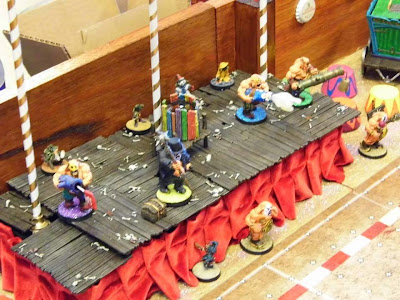 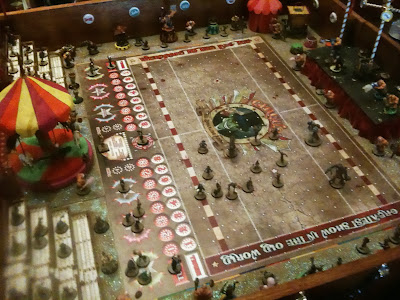 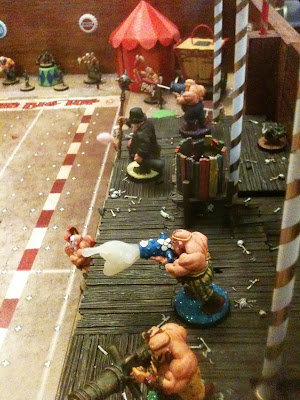 Photos by myself (blurry) & The Dwarven One (professional).
Posted by Barks at 22:24 8 comments:

I present my new team: Bite Club! If it's your first game, you will get bitten...

The Brides are from Westwind. The ethereal dresses were an interesting challenge, and I think the red-head's came out best.

The coach/ head vampire is also from Westwind, and will stand in as Star Player Luthor von Drakenborg if required. He's on a 30mm base.

The Thralls are Corn Dolls from Crooked Dice. They're great miniatures, but I confess they're not very theme-y. Maybe the vamps have gone vegetarian? I almost rage quit from getting the arms to stay on. I should have pinned them. Painted up, they look really sinister and I may recycle them into another team...

The reroll markers are from Warhammer, and will hopefully see use in other games such as Fear and Faith.

All up, this was a fun team to paint and I expect it to be a real challenge to play at Eucalyptus Bowl this weekend.

*If you can work out the name of the fifth vamp (green hair with the coach), give yourself a pat on the back.
Posted by Barks at 21:03 8 comments: