I finally got these finished! I'm happy with the limited palette, which ties them together as a force.They are all Gripping Beast figures- the Berserkers and Levy are metal, the rest are plastic. Follow these links for more pics:
When I finished off the Warriors, I also took the opportunity to improve the Hearthguard's helmets, swords, and shields.

It's been a while, but I finally got my Gripping Beast plastic Viking warriors done for Saga. The figures are, by design, generic, but the faces are very characterful and a pleasure to paint. I hadn't planned to have detailed shields, but got caught up and painted a few designs on.

I'm just tarting up my Hearthguard, and next time I'll show pics of my entire Viking force.
Posted by Barks at 22:36 5 comments:

So, I made it down to the monthly Newcastle Legion Club meet, and got two games in.

First, I played Shannon in Level 7- Omega Protocol. This is a gun-crawl following on from the events of Level 7- Escape, a smaller-scale tile-based survival horror game. L7-Escape is about an underground lab where human-alien hybrid experiments have gone wrong, and you have to escape. L7-Omega Protocol is the spec-ops team going back in to mop up.

My three commandos of Team Disco* advanced through the first level, finding both the required intel and the exit lift. I mowed down more than a few Greys, and took a few scratches in return, but nothing too serious. I'm sure we overlooked a few rules. 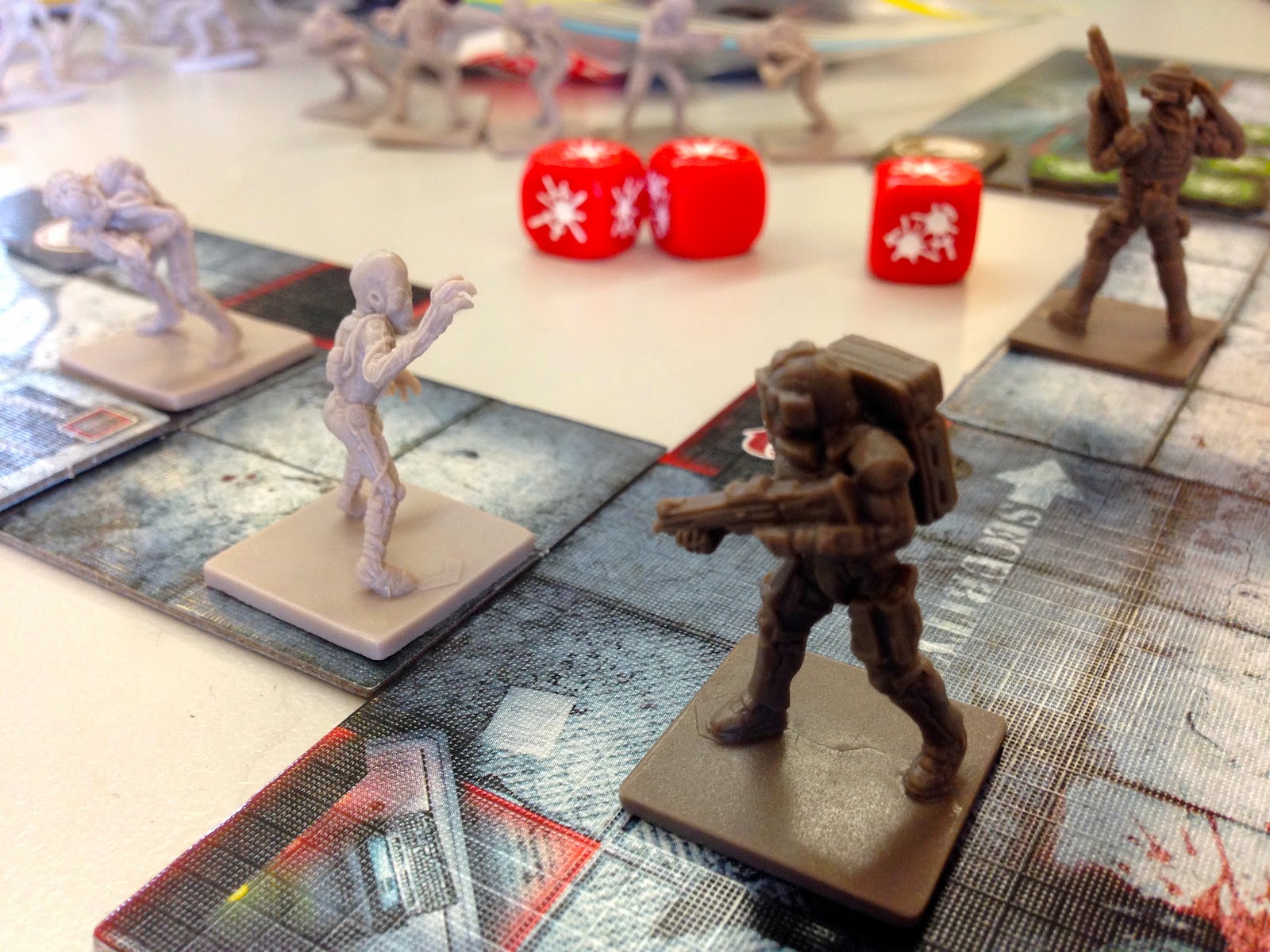 The aliens are of the 'Grey' variety, and the sculpts are suitably creepy. The commandos are hard-SF full body armour types, and all the minis and components are decent. The dice are nice simple hit-miss custom dice in black or red, depending on damage potential.

Gameplay was surprisingly good. Commando action points are spent and then passed to the alien player- the more you do, the more he can do and vice versa. Each soldier comes with extra kit options to boost their abilities. Each turn you select a 'Stance' for each soldier- firing, advancing, or running- which doesn't limit what you can do, as much as how well you do it. For example, if I sprint I can still shoot but not very well, and if I shoot I can't move so far, etc.

Next, it was time to get back into Saga with a 4-point game against DC. We're kicking off a light narrative campaign. The border was being threatened by Vikings, and Godwin's Anglo-Danes were protecting the bridges. Here are DC's photos from his perspective (and my only one):


A risky charge by the proud Viking warlord didn't pay off, and my warlord (the newly-christened Ealdorman Godwin) chopped off many arrogant Viking heads. I managed to clear the field of my opponent, huzzah! Sharp eyes will note my force is a mix of my Vikings and Anglo-Danes, including my newly-painted Viking warriors. More of them in my next post. DC's Vikings are metal Gripping Beast figures.