I went to CanCon over the Australia Day long weekend, and had a blast. I only had an old phone camera, and didn't get enough pictures to scratch the surface of all that was there, but still hope I make the non-attenders jealous.

I took part in the Blood Bowl tournament, giving my Lizardmen team a run.


Day One I played against all greenskins. I blew off some rust in the first game to draw 1-1 against Lelrythus' orcs. In my second game against Oozeboss's Goblins I suffered under his chainsaw, but won 2-1. (Unfortunately, I didn't get a picture of his team which won the 'Best Conversion' award with a troll chucking a gobbo). Finally, I played Thomsy's orcs- I had him utterly over a barrel but he got insanely lucky and pulled out a 1-1 draw in the final turn.


Day Two started against Sledge's Dark Elves with a convincing 4-2 win (I got lucky and caused two casualties with my first two actions, then things got worse for Sledge). My next game was a real struggle against Devil's Reject's beautifully converted and painted undead (he deservedly won best painted team, and also came third overall). I couldn't overpower his mummies or outpace his ghouls, and lost 2-1. I played Sun Tsu's High Elves in the last game, and won 3-2. I had to work hard to keep him from scoring as he had some excellent players.


The seventh and final game was against Senexis' Orcs, and I had a satisfying 3-0 win, including a Kroxigor touchdown!

In the evenings, I managed to get a few new games under my belt: I played a game of Nexus Ops, which was undeniably colourful! I'd do better if I played it again, now that I know what I'm doing...


I also got a game in of DungeonQuest, which I hadn't encountered before. Here's a picture of my first turn:

But the other players let me reset, and I got a few laughs out of the rest of the game. I was expecting some sort of HeroQuest dungeon hack, but it was more of a push-your-luck game- how far do you go into the dungeon before you turn around and decide it's better to live poor than die underground?

At CanCon itself some superb demonstration games were going on including Isandhlwana, Boxer Rebellion, Franco-Prussian war, WW2 Pacific tanks, ACW, a Cold War hypothetical, a WW1 aerial game with a huge zeppelin, and a retro old school HG Wells Little Wars game with massive shiny soldiers and buildings out of wooden blocks. I was too busy in the tourney to really get to explore these games or get decent pics, unfortunately.

I took a few pictures of some very nice tables for 'Infinity': 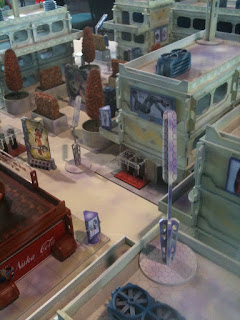 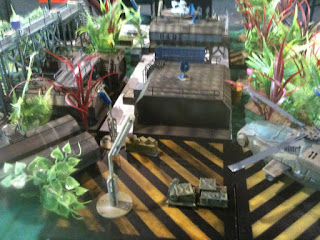 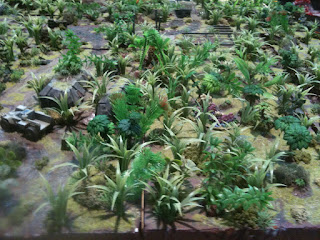 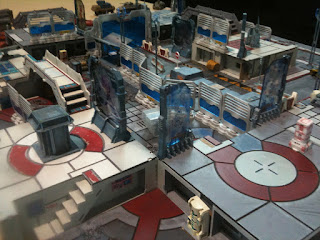 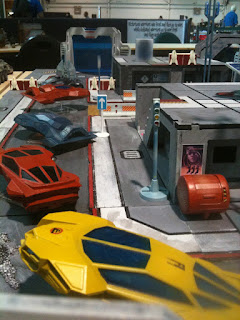 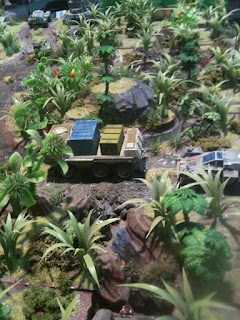 The Canberra Gaming Society were also giving away a lovely Mike Broadbent Australian Light Horse figure as a memento (to celebrate 100 years since the publication of HG Wells' 'Little Wars', I heard), which will eventually find a way to my painting table. 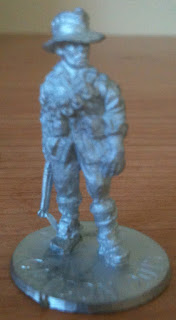 I picked up a load of Saga stuff, some Flashpoint moderns, rubber roads from Fernvale Specialty Scenics, and a few other bits and pieces. I don't know whether to feel faintly nauseated at the cash I spent, or self-congratulatory at the bargains I got, or smug at the self-restraint I exhibited in not getting much much more!

Here's a kitten photo, because the RSPCA were there for some reason:


Last but not least, I also got to exchange a few words with Paul of the Man Cave, who had a nicely painted Ogre team. Good to meet fellow bloggers!
Posted by Barks at 19:36 13 comments:

I web-ordered this Reaper figure thinking he would make a fun tongue-in-cheek Viking warlord for 'Saga', with his utterly ahistorical gear and over-the-top pose. 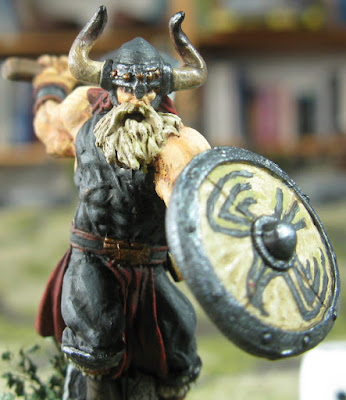 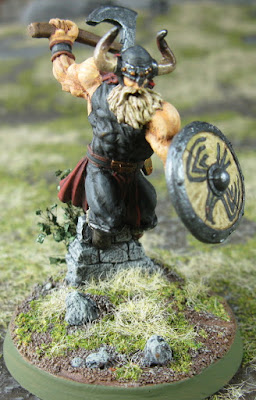 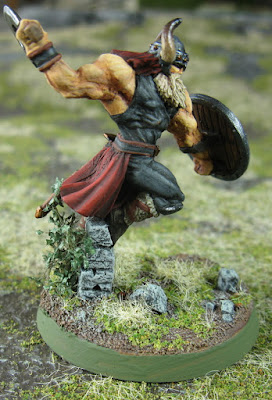 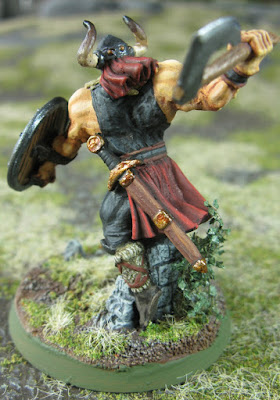 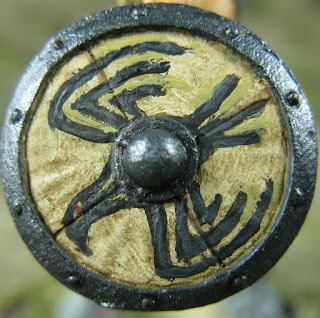 He turned out to be a little larger than I was expecting! Still, I enjoyed painting him and will shamelessly use him whenever I can. 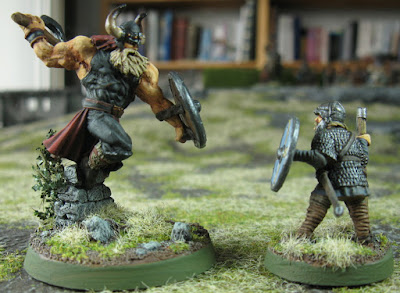 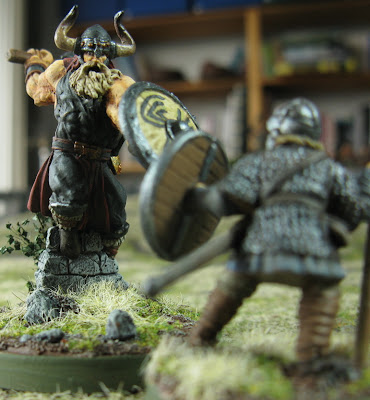 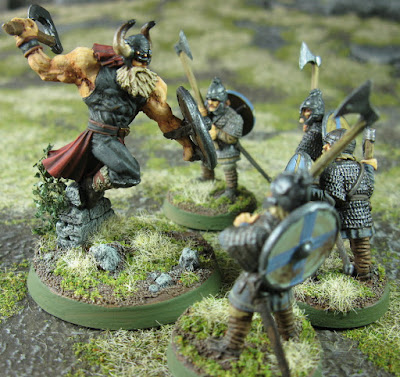 I don't have a name for him- I was thinking of Larger Than Leif.

He's on a 40mm base. The foliage is Army Painter Poison Ivy- a little adds a lot. AT some point I plan to re-do his shield so it is more bone-coloured and less yellow.
Posted by Barks at 21:42 6 comments:

I bought some Neomics fantasy football goblins in, I think, mid-2010. I basecoated them with paint-on white primer, but overdid it somewhat. This goblin shows where I scraped away some of the excess paint on the model's undersides, and also demonstrates many areas of excess build-up. Looking at this picture now, I'm amazed I didn't strip this one. 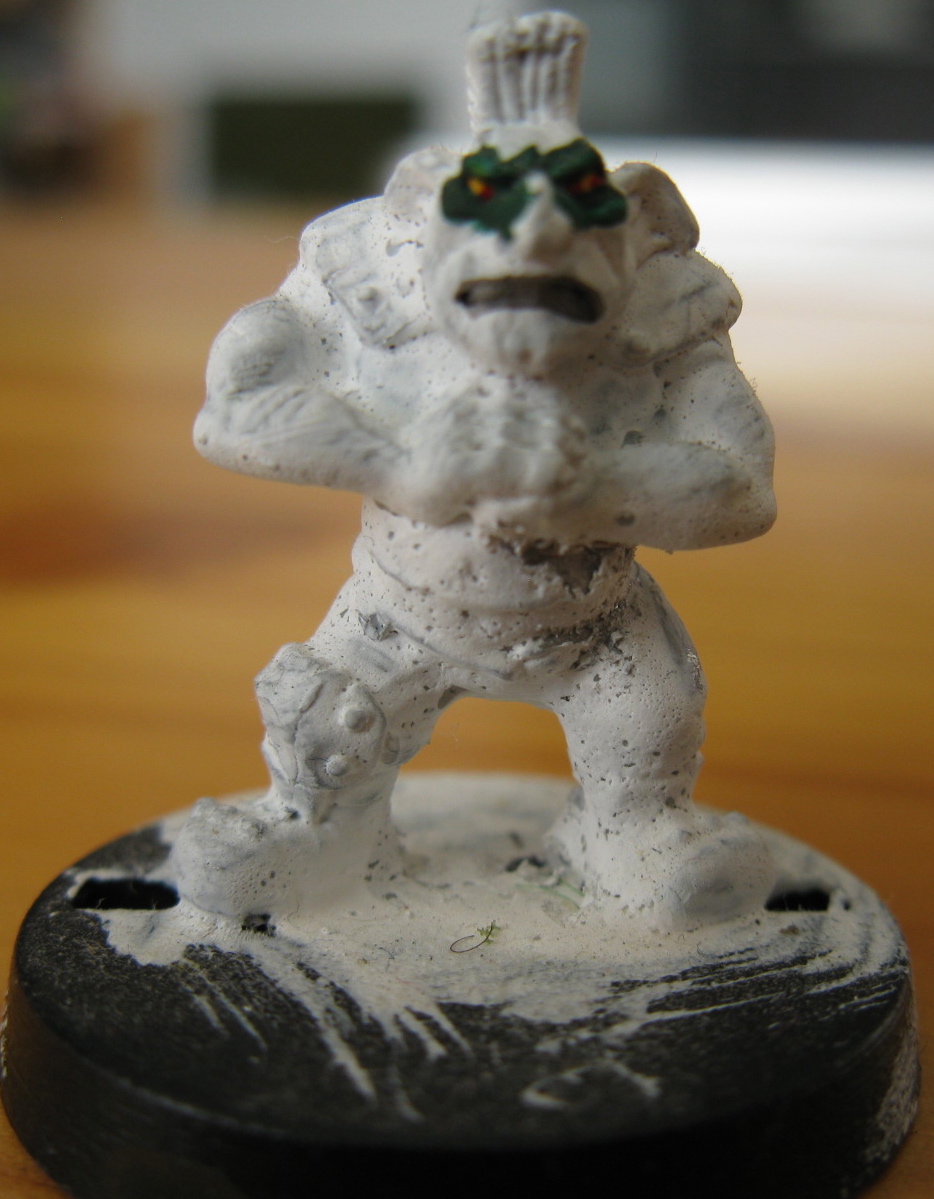 Some of the miniatures had too much paint on them to simply scrape off, so I put five of them in a bath of Dettol, and left them.

For over two years.

The longer I left them, the less enthused I was about opening that Pandora's tub. Today- for some reason- I decided it was time... 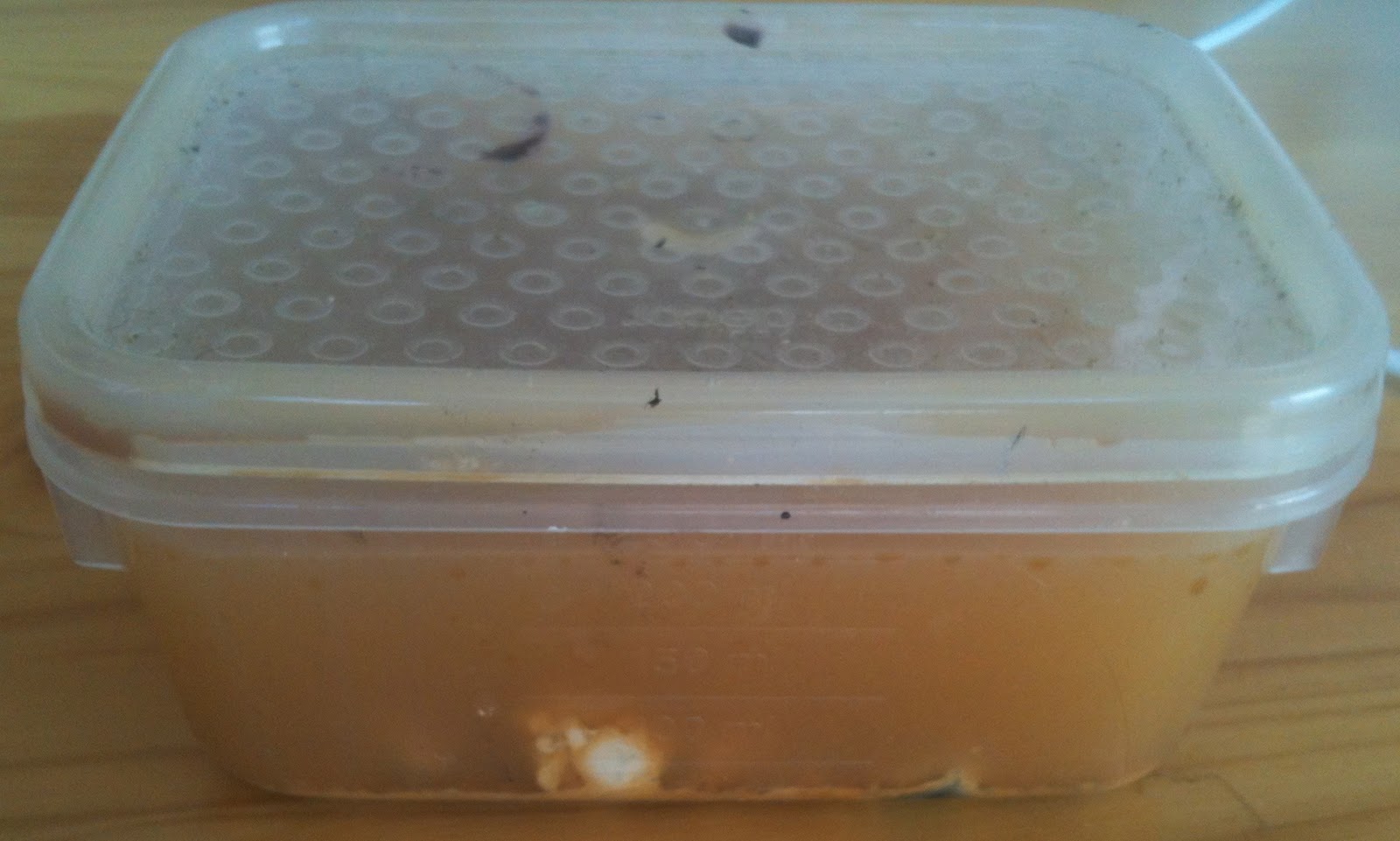 I removed the lid, and wafted the air cautiously (as I was taught in high school science)- still smells like Dettol. I ran a hot tap into it to clear the Dettol out, which revealed a sludge of miniatures, paint, and softened Slottabases. 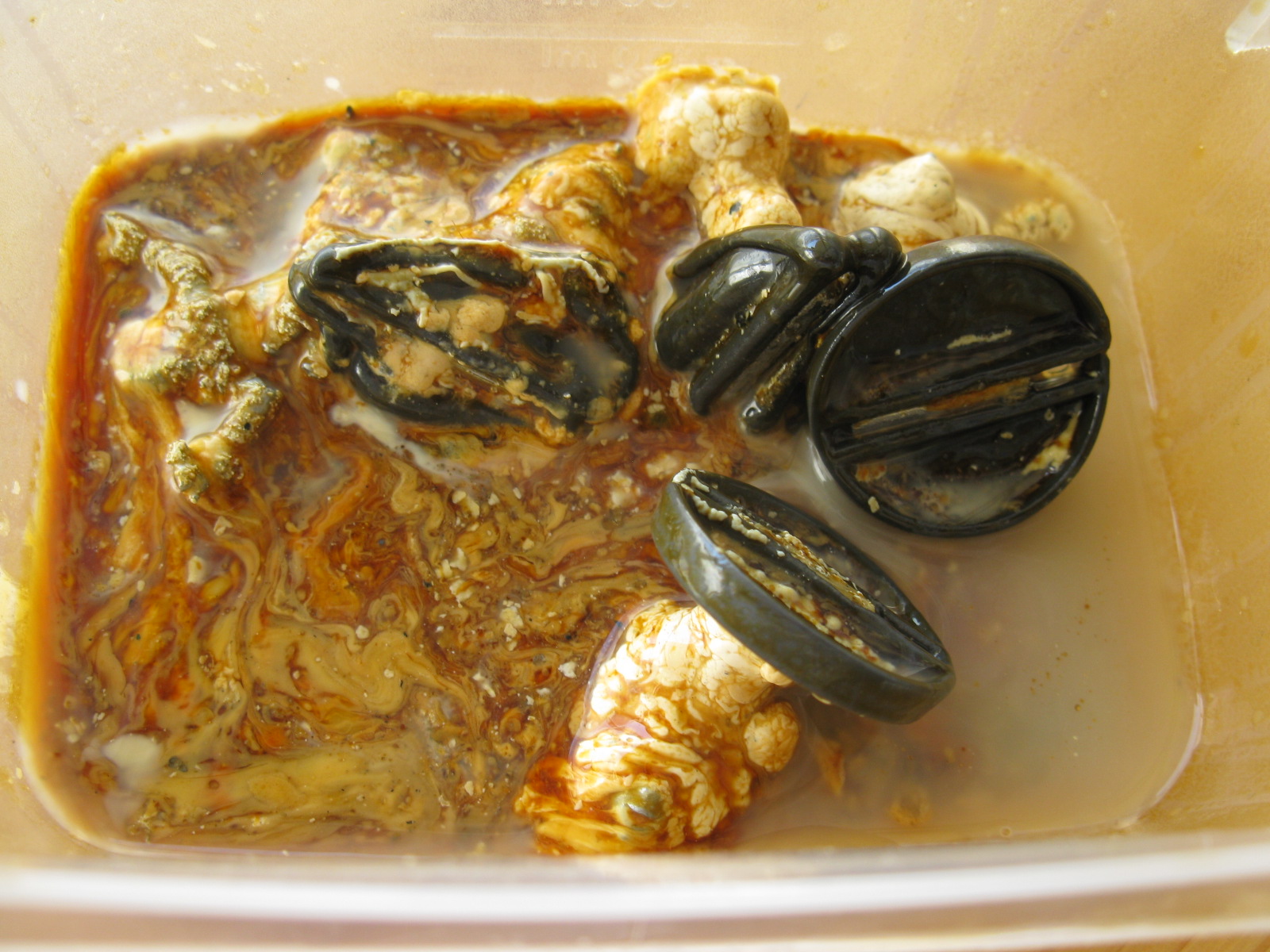 I scrubbed with an old toothbrush, which removed the worst of the sludge, but after a while it was just spreading the goo around. It has this wonderful tacky, stringy quality to it. 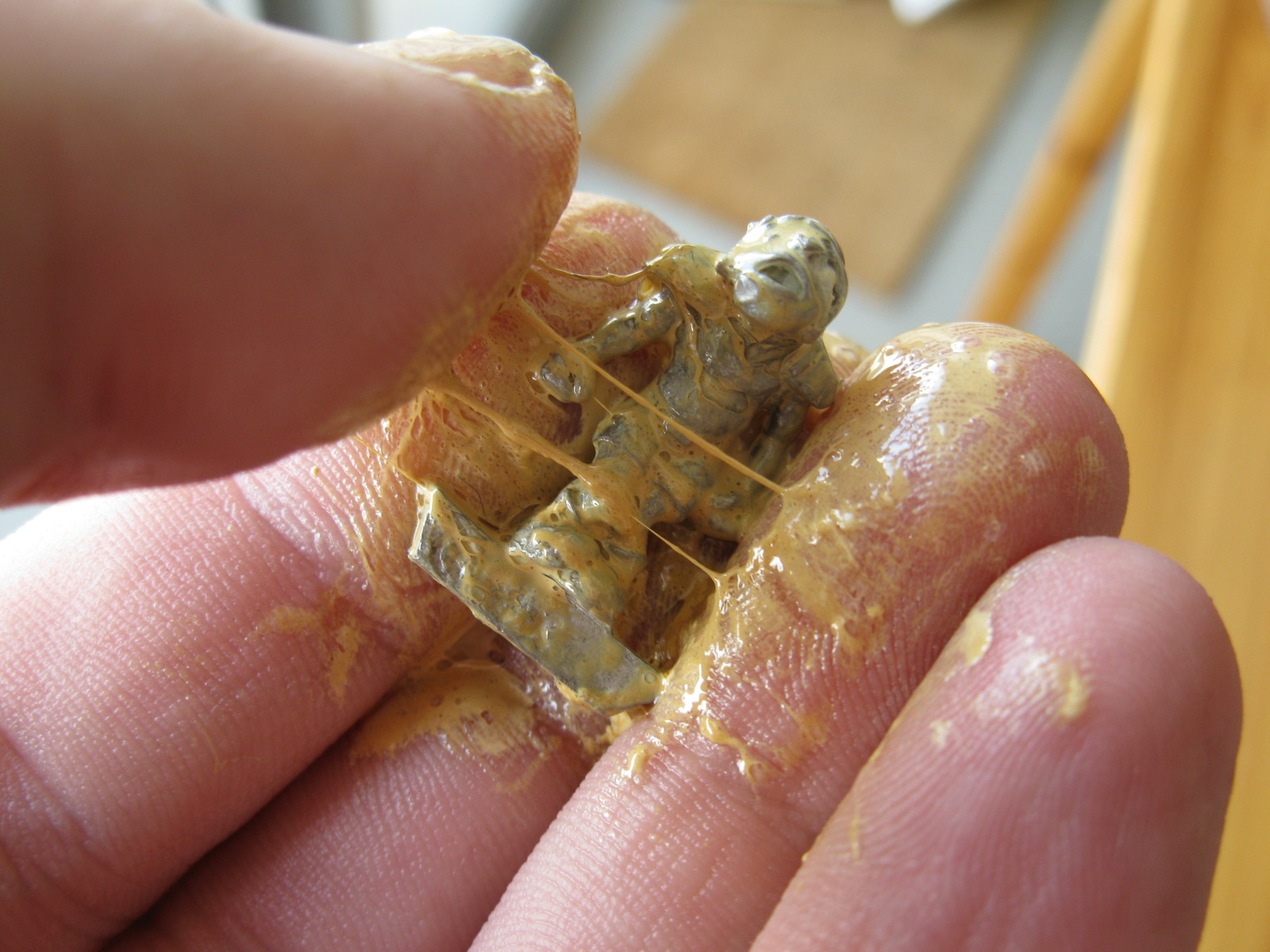 Luckily, I had a small amount of mineral turpentine around, and that helped clean off most of the rest. I'm going to leave them to dry, then do the turps thing again to clear off any residual muck. Then I'll be back at square one! Maybe I should strip that figure above...
Don't know what it's done to my hands, let alone the local drainage system...
Posted by Barks at 16:52 14 comments:

Email ThisBlogThis!Share to TwitterShare to FacebookShare to Pinterest
Labels: 28mm, Blood Bowl, how to paint, Neomics