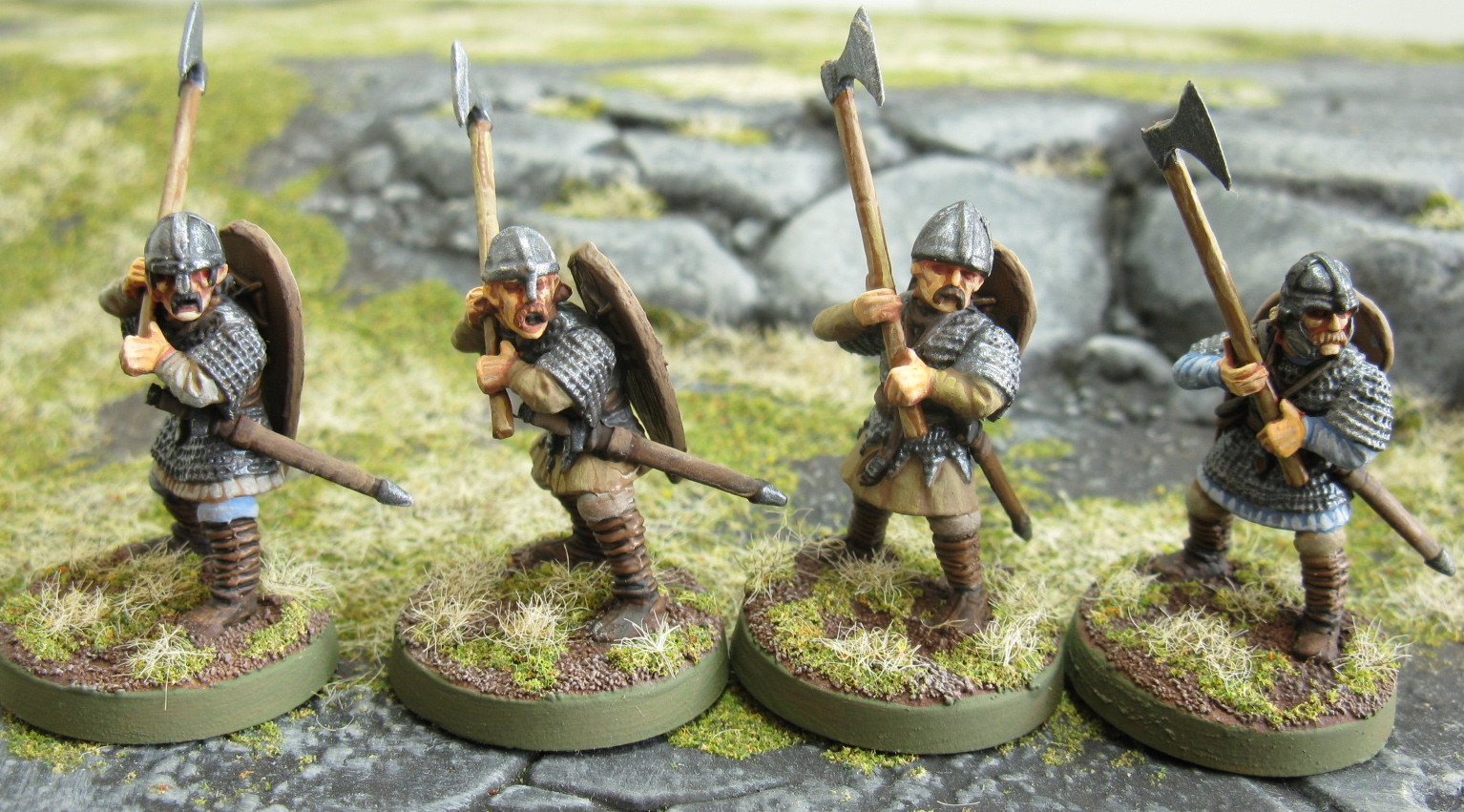 Nothing terribly fancy with the shields, but the limited palette and identical patterns really tie these guys together. I think the green-stuffed shield bosses work nicely. I decided to paint the shield rims as leather hide (rather than metal), and repainted my other (round-shield) hearthguard similarly.

Here are all my Anglo-Danish hearthguard together: 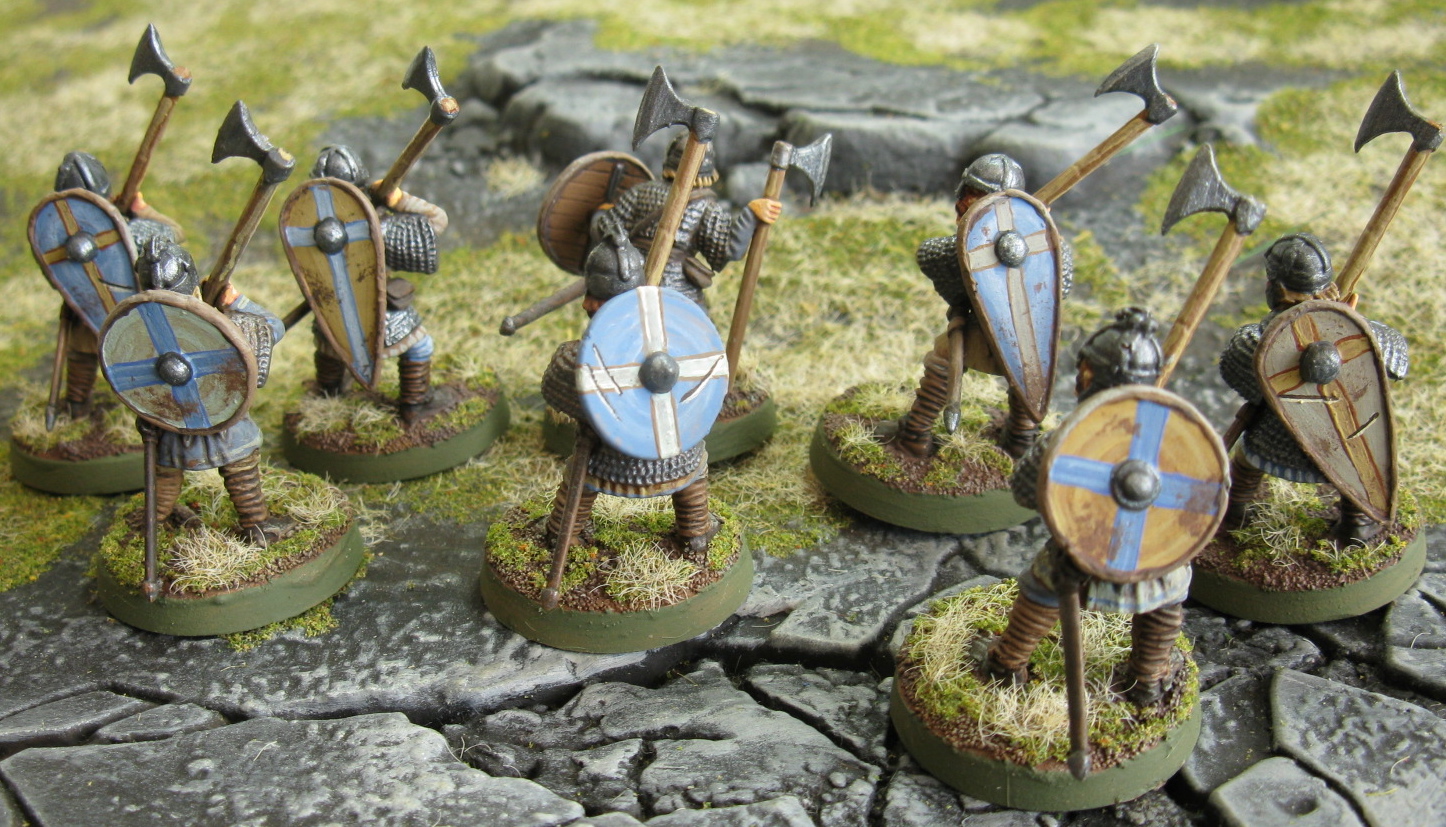 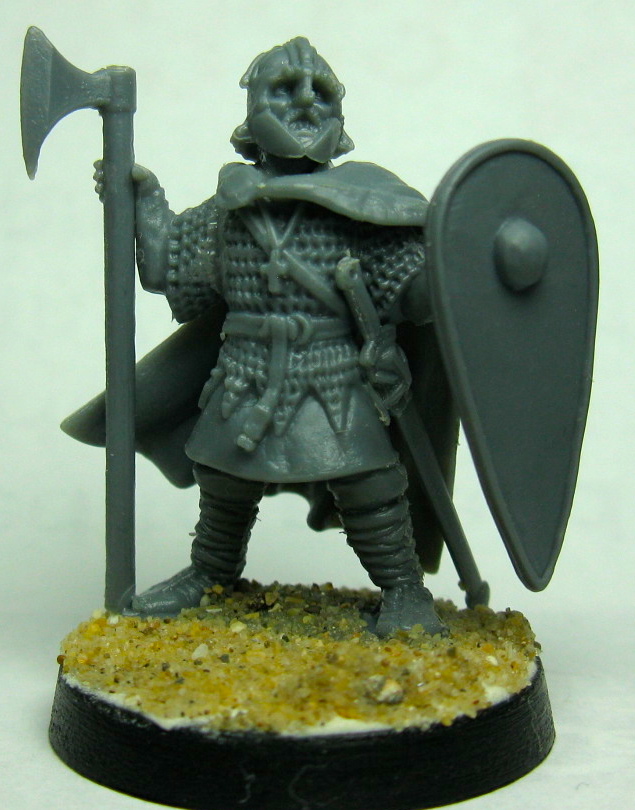 The essence of moisture is wetness

I obtained a lot of useful feedback on my previous post about painting rivers. I made an executive decision to stay with green, and to get the essential river appearance via several coats of gloss varnish.

This is still a trial/ WIP, and the rivers still need their banks flocked and rocks picked out. Here are my four trial pieces:

I think that the combination of darker and lighter shades works best, but it does require a degree of artistry to achieve an aesthetically pleasing result.

I used two coats of gloss varnish, which isn't really apparent in the above pictures. Here they are all together, with some natural light reflections. The subtle differences between pieces aren't at all noticeable in these pictures. I also put in the GF9 bridge with some of the FSS roads.

Or, back to the Dark Ages.

I was inspired enough to do a little work on my Anglo-Danish hearthguard for Saga. The bodies and heads are from GB Saxon Thegns, and the Dane axes are from the GB Viking Bondi set. I used some Conquest Norman shields and green-stuffed a gubbin in the middle of the three shields without.

In other news, last week's river experiment continues; hopefully pics in a week or so. I got in two games of X-Wing at the club today (on a Cor-Sec starfield), I got utterly smashed for my newbie-ness. The Emperor will be displeased...
I've also gone in for the Sails of Glory KickStarter, and am rereading my Patrick O'Brian's. I am with child for this game to come out. 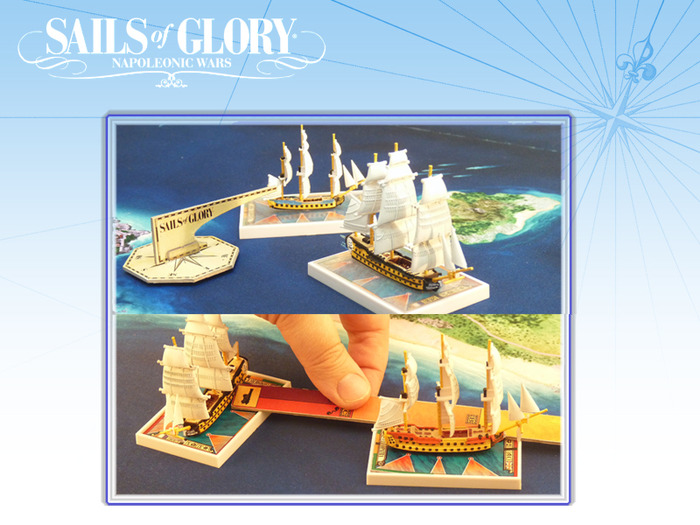 What colour is a river?

I picked up a few sets of GF9 rivers a while back, and am glad that I did because I understand the 'starter' set with the bridges is now hard to find.

The bad:
Several of my pieces came stuck to one another and were scratched and scuffed. Several other people have had the same issue. Here are the worst: 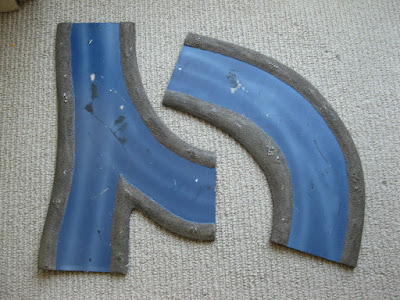 Disappointing, but not the end of the world. So I'm going to repaint them- what colour? These pieces will have to stand for a variety of scales and environments, from desert to jungle.

I've never really been a fan of blue rivers and streams. I've seen some lovely model railway scenery with a dark bottle green, and was pleasantly surprised by some of Battlefront's repainted brown pieces:

I initially decided to go with an olive green. When I placed a trial piece on my board, however, it disappeared into the rest of the terrain- I then appreciated the benefits of blue rivers. I have just made a variety of different colours, and appreciate your input:

I cant decide between the olive green and the blue. If I do go for olive green, I'm not sure if I should go for a flat uniform coat, or something with a bit more variety in it. I only slapped on a little paint, and the streakiness is somewhat pleasing, if difficult to reproduce consistently. On the bottom two pictures in particular you can see where the factory blue paintjob 'rides up' the banks a little.

The gloss varnish helps, but isn't as glossy as I expected. A few more coats will help. These paintjobs are surprisingly gritty; don't entirely know why. I've have gone for speed over neatness. I've yet to flock and pick out the stones.

On the WWPD site, I found this sneak-peek picture from Battlefront which appears to show a variety of wider and narrower streams and rivers yet to be released. Looks good! 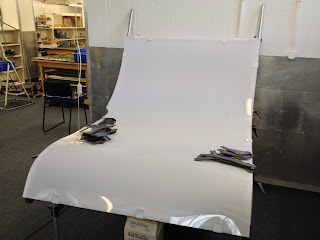 I'm still hanging out for a waterfall piece. Have a look at Eric the Shed's excellent rivers and waterfall! (I note he went for blue, and it looks great.)

Where the rubber meets the road