This collection of tanks are from PSC for their Great War game. They are single piece precoloured 1:100 models, and are very cleanly sculpted and casted. I highly recommend them.

The Mark IV comes in Male and Female varieties, with and without a pair of 6 Pdrs respectively.


The British also get a Whippet.

To make up for the scarcity of their A7V panzers (see last week's post), the Germans salvaged British Mark IVs and repainted them as Beutepanzers.

These are all great sculpts and a pleasure to paint. I really like the asymmetry and oddball appearances of these early beasts, and I hope that PSC does a French range at some stage.
I used Vallejo Dark Earth paste, drybrushed with US Tan, for the mud.

These were painted for AHPC VII.
Posted by Barks at 12:59 10 comments:

The A7V was introduced in the last year of WW1. Only twenty Sturmpanzerwagens were built, compared to the well over 1000 British tanks which fought.

These tracked and armoured fridges are 15mm A7Vs from PSC. They are very precisely sculpted pre-built models and I recommend them. I made up the camouflage and markings based on an amalgamation of historical vehicles. You can see the origins of the iconic Hinterhalt (ambush) colours. I stippled it on using an old brush. The crosses are decals I picked up from eBay- I would try to freehand one, but not a dozen!

Of the twenty A7Vs, only one survives- No. 506 Mephisto. It was stolen by Australian diggers (Aussie Aussie Aussie! Oi! Oi! Oi!) and is currently in our national war memorial (unmissable if you are in Canberra). Fellow Aussie blogger Kaptain Kobold has plenty of info and pics of his visit here- here's one showing the 'nose art'. The demon Mephisto is cheekily running off with a British tank! I tried to replicate this freehand, along with the name. Mephisto has a lot more green to it than mine, but I can live with that. 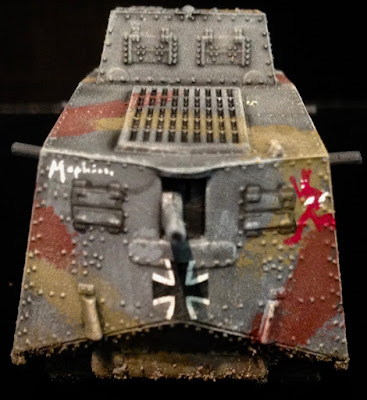 I confess I haven't seen Mephisto in the flesh, and I would love to do so someday.

You will recall my loot from CanCon 2016 had a mysterious package from Terran Studio. I assembled it, and have now been using it for just over a year. 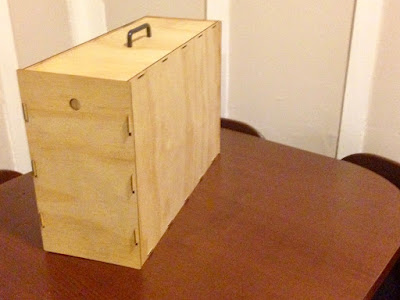 So, it's a carrying case for paint and hobby tools and bits and bobs. Since January 2016 I have moved four times, and this carrying case has been great.

On the whole, I highly recommend this product if you're moving your hobby area frequently.

Unfortunately, I don't know if Terran Studio is still an entity, but there is a Facebook page.
Posted by Barks at 16:11 8 comments:

Not just seeing old friends at the Blood Bowl tournament,  I caught up with other gaming companions. Here's some of my 'local' club, the Newcastle Legion, on Red Shirt Saturday:

And these reprobates are at the Australian Wargame Bloggers' Meet-up. Later we had drinks and I had a short chat with Millsy and Kaptain Kobald. Paul of the Man Cave couldn't make drinks, but he was about. Check out their blogs through the hyperlinks! 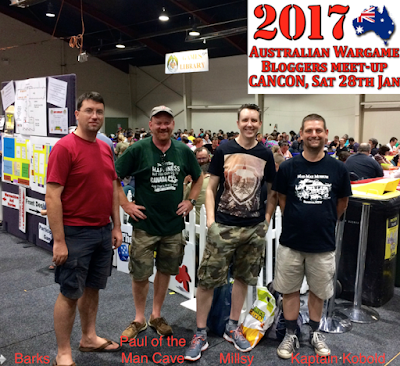 Finally, here's my loot. I was very restrained in getting actual figures! 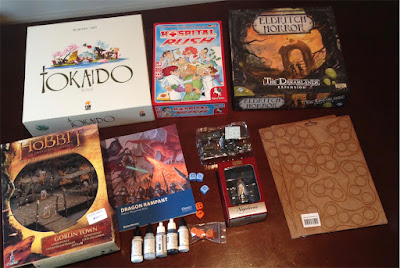 PS: To round off a huge hobby week, I was very chuffed to receive a runner-up place in the AHPC theme rounds for some 20mm samurai who, I hope, will grace this blog later. The theme was 'East', to be interpreted at your discretion. See the other winners here. 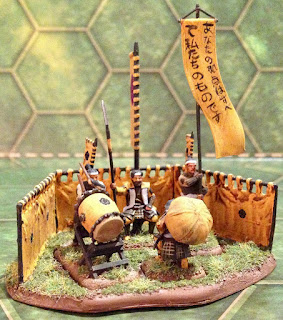 The main reason I went to CanCon was to take my Norse team, The Pillage People, to the Australian Blood Bowl Nationals.

I could only make five of the six games due to having to leave early on the final day. Previous CanCons have been a marathon eight games (2016 Halflings) and seven games (2013 Lizardmen). The shortened format was less gruelling, and allowed me more of a leisurely look around the convention than previous years.

Cullen was the youngest player there, but being the son of Rabid, one of Australia's strongest players (and- spoiler- winner of the tournament), he comes from good stock. He played a solid game but I was able to win 2-0 with 2-2 casualties.

This was a fairly straightforwards match between his dodging Amazons and my blocking Norse. We wound up with a 1-1 Draw and I took out the casualties 3-2.

This was not a game I was looking forward to, and my apprehensions were proved accurate. Thomsy is a great guy and a strong player, and his dwarves barely put a foot wrong. He took out an Ulfwerener and a Berserker on turn two, and it went downhill from there. He won 3-1, and also took the casualties 3-1.


This was the best match of the tournament. Sangraal is my long-time BB opponent, and I think we can each say we've fuelled the other's BB addiction over the past 15+ years. His team were also Norse, using vampire biker gang figures. I was again apprehensive going in, as I was understrength following my drubbing at the hands of Thomsy's dwarves.

Receiving the ball, some lucky rolls and a wizard's fireball allowed me to score in the first half, and I delayed his scoring until well in the second, leaving us with a 1-1 tie and 3-3 casualties. With this match concluded, my earlier casualties returned from the hospital and I was able to face my final match with a full team. Furthermore, I was able to hire a Snow Troll with my accumulated winnings. I was feeling good.

So in my last match, my rookie Snow Troll got injured in the third turn, and then my team got taken apart. I've not seen someone roll so many tens... I suffered a massive nine (!) casualties, until the ball became an afterthought and I was fighting to survive. Leigh was apologising profusely for the farcical damage. I lost 3-1, and was thankful I didn't have to play a sixth match as I wouldn't have had anyone there!

So, one win, two draws, and two losses. I don't think the Norse suit my preferred playing style, but I did have a fun time and a great set of opponents. It was, of course, good to see other old friends also playing in the tourney.

There were 25 coaches (4 Orc, 4 Undead, 4 Amazons, 3 Norse, 2 Human, 1 each Slann/ High Elf/ Skaven/ Chaos Dwarf/ Dwarf/ Chaos/ Dark Elf/ Dwarf). I don't yet know where I came overall. I think more coaches wanted to play, but there was a strict cap due to table space limitations and (I hear) fire regulations.

To ease the pain of that final match/ massacre, I was stoked to receive the award for Best Painted Team! There was some good competition, and I haven't won one of these since my Pro Elves took it out at the inaugural 2005 EucBowl. 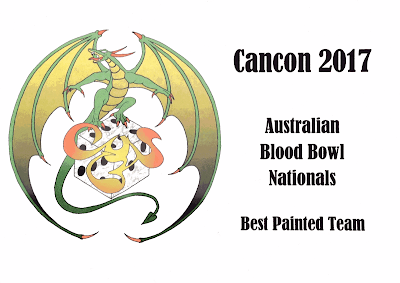 Tomorrow: Social events and my loot
Posted by Barks at 17:13 10 comments:

Well, it has been a big week in gaming and painting for me, so rather than my regular Friday post I'll break this week up into three.


I went to CanCon and took a few pictures of games and things (particularly scenery) that caught my eye. First, some Bolt Action: 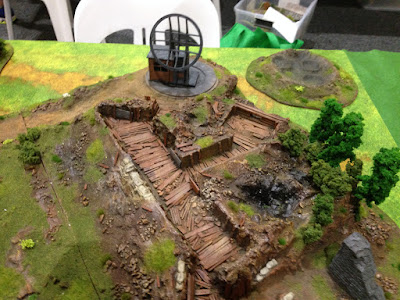 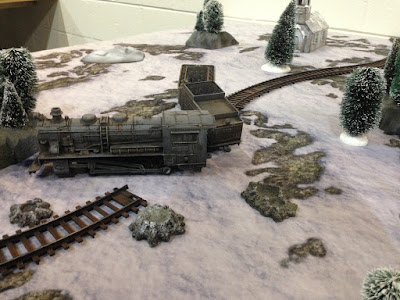 MDF scenery has come so far. All the scenery, including vehicles and spaceships, in the next few pics are all wooden. 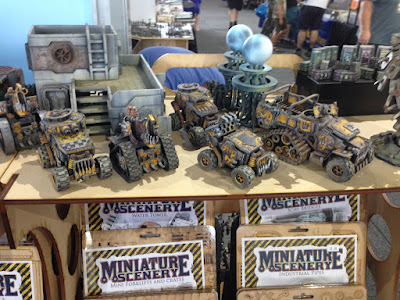 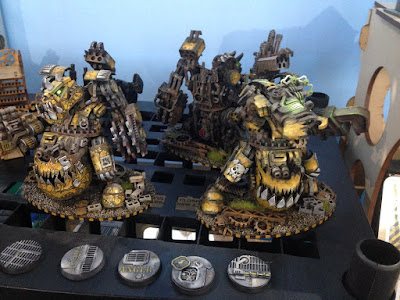 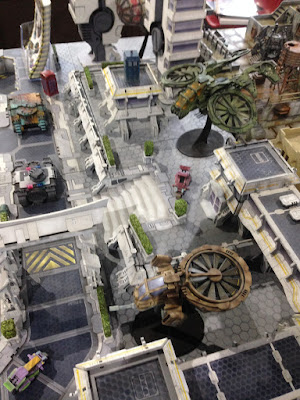 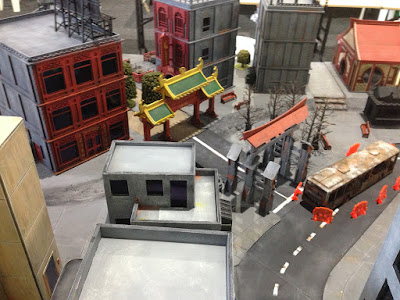 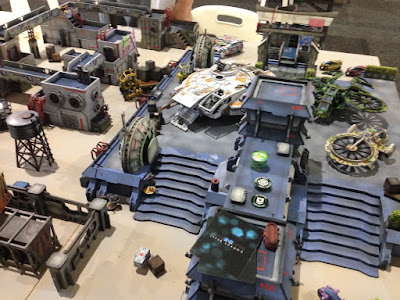 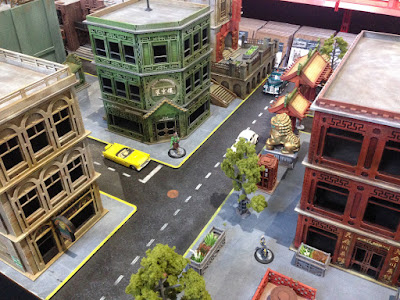 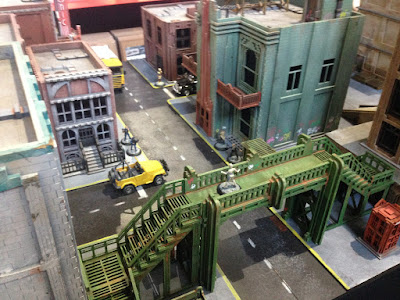 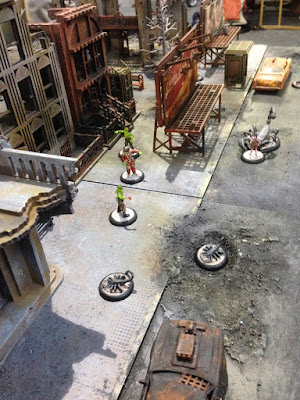 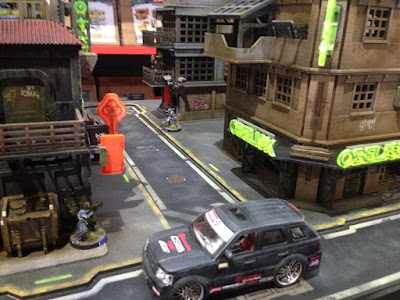 Yup, that was all wood. 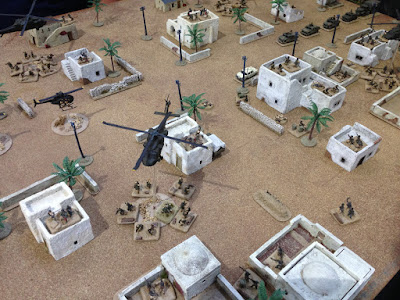 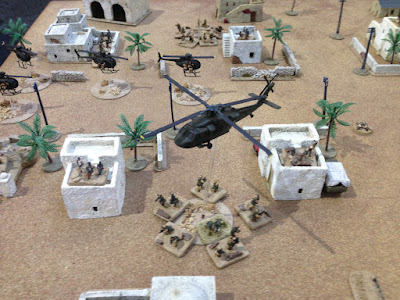 There weren't very many large demonstration games this year. This one was the Battle of Shumshu in August 1945- Soviets invade Japanese-held islands. 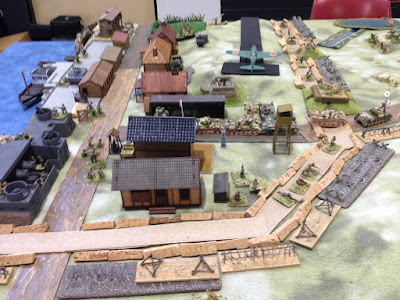 Some Flames of War with nice terrain. 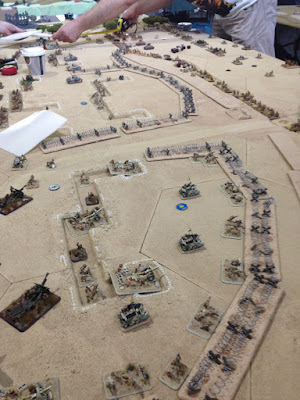 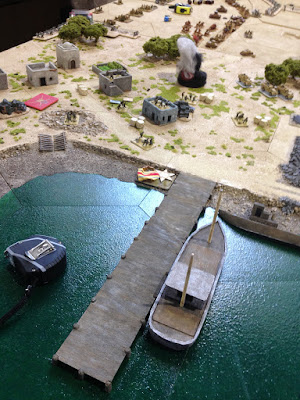 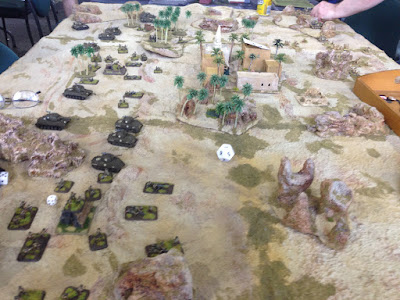 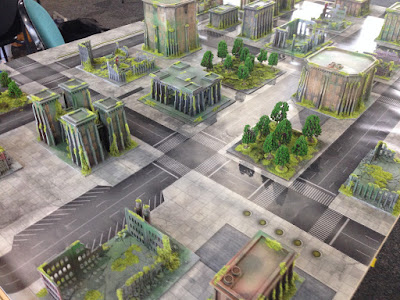