I found these in the shops today. The top three are my pictures, and have an Irishserb HMMWV and some WIP Peter Pig militia on 20mm washers for scale: 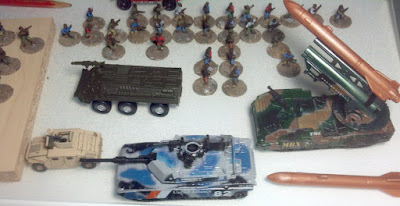 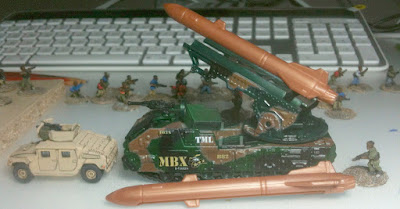 Matchbox Rocket Launcher- ?fantasy vehicle, scale unclear. Rotating and elevating launcher with removable rockets, moving tracks, opening hatch, rotating MG. My google-fu failed me in finding any pictures. This will be a great objective for games.

Aged about 12, I was so proud of these. Humbrol enamels, oh the horror. Luckily I didn't need to paint the uniforms as the plastic was the right colour! Unfortunately, they were confiscated by my teacher for the rest of the year.

My latest Blood Bowl team, which will get an outing this weekend if possible. Starting roster five saurus, 6 skinks, 3 rerolls, apothecary, 1 FF. 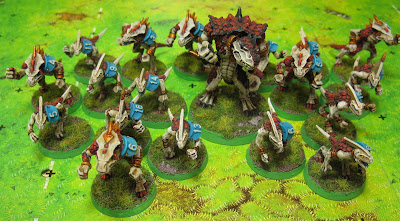 I've had the idea for the team for a few years, but did nothing about it until I got some cheap skinks at MOAB 2011. I rounded out with some Saurus from a bits-order via Ebay, and a Kroxigor from Mind Games in Melbourne. I did some terrible green-stuffing for straps (my greenstuff is old and almost unworkable, that's my excuse) to hold on the shoulder pads from Impact!, which are excellent for BB conversions. A simple and quick paint job, which I think is quite effective.

I'm thinking of calling them the 'Skink Bomb', but I'd be interested in your ideas. They'll have silly aztec-incan names (Poliputaketlon, Inyafaz, Chiqentika etc), and I'm looking for a jungle-lizard-dinosaur-latino name, preferably some kind of pun.
Posted by Barks at 11:36 3 comments:

Just a quick post today on some homemade SAGA dice. Stickers and coloured felt pens- the colours make it really easy to tell what's going on.

Incidentally, why does SAGA have capital letters?
Posted by Barks at 19:30 2 comments:

I painted the figures based on the tailgate photo of B20, showing DPM trousers and a pale tan smock.

This was my first attempt at DPM, and I'm not entirely happy with it. The boots don't look quite right either. I am, however, very happy with the way the weapons turned out. The figures have a pleasing bulk to them, and a creative painter could use them for arctic scenarios.

If you haven't read 'Bravo Two Zero', do yourself a favour and pick it up. It may play somewhat loose with the truth, but 'Andy McNab' is a great storyteller. The book's success heralded a tsunami of SAS books.

There is also a 1998 telemovie starring Sean Bean, which was actually better than I had anticipated.