This was the 40th CanCon. CanCon has now spread to a third hall, which meant things weren't as packed as previous years. There were more food vendors, which was a relief.

Most importantly, we had the Aussie Wargames Bloggers meet-up, where numbers were down compared to previous years. Millsy, Kaptain Kobold and myself caught up for a photo during the day and later we all went out for dinner with friends on Saturday night at the Ducks Nuts. 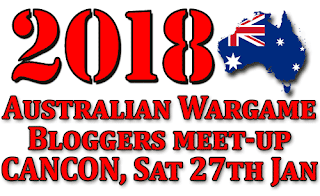 Being busy coaching Blood Bowl, I didn't get a leisurely look around. Here's some pics of demo games I saw:


I picked up some goodies from Slave 2 Gaming. My eye was also caught by their 18mm Teddysburg ACW range, and some lovely 54mm WW1 figures.


I took a number of photos of scenery that caught my eye. Many of these are not in-progress games.


I missed taking photos of a very impressive 6mm Team Yankee game based on the Soviets doing an amphibious invasion of the Jutland Peninsula, with some monstrous air cushion landers.

I was walking past the Age of Sigmar tables when they had their armies on display: 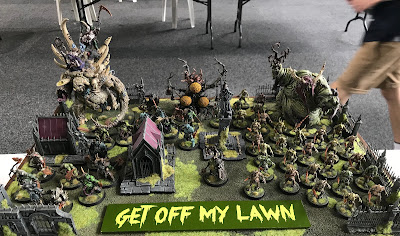 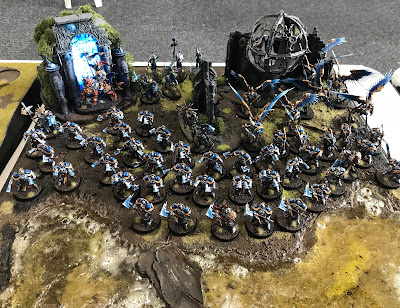 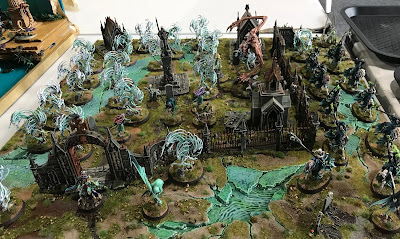 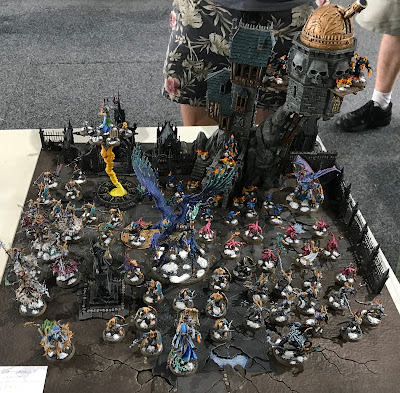 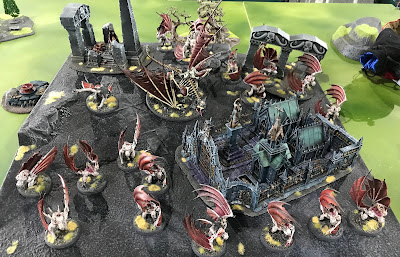 The second hand stall was in a much larger area this year, but I didn't pick anything up. 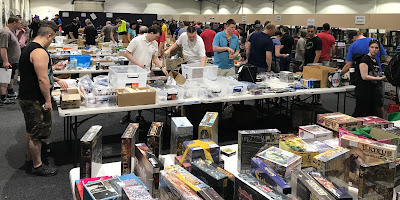 I did buy a few boardgames, particularly some escape room and puzzle games which I've enjoyed with The Skirt Swisher previously.

Last weekend was CanCon. I took the Entwives to the Australian Blood Bowl Nationals, which had a new resurrection format this year. It cut down on the bookkeeping, and made squishier teams (such as Wood Elves...) more sustainable.

I changed my roster at the last minute, and finished a Treeman that was sitting around incompletely painted. My plan was to play fairly conservatively. My roster was two Wardancers, a Thrower, three Catchers, the Treeman, and four Line Elves. I had two rerolls. 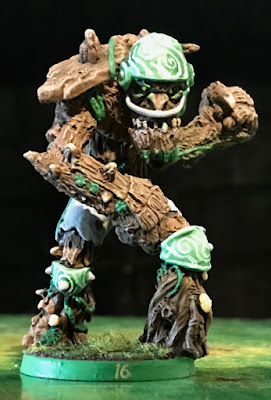 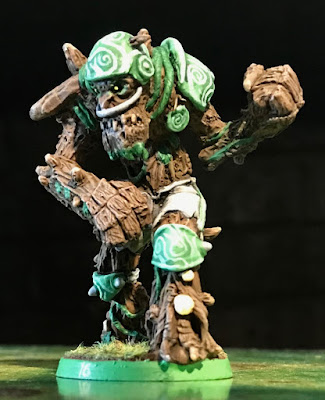 
So, the conservative plan went swiftly out of the window. I rolled four successive 1s which left me in a dismal situation, and my Tree rooted himself to the spot. I went down 3-0, suffering 4-1 casualties...


I wasn't looking forward to playing Orcs, and struggled in the first half. I tripped over on the line, and the Tree spent most of this game flat on his back failing to get up. I was lucky in my armour, only suffering three casualties from a barrage of blocks. With only six players on the pitch in the second half, I pulled an Elfy comeback and won 3-1.


More Orcs! I had a fun game against Andrew, where again I had to modify my conservative plan after my Tree was injured very early on. I played for time in the first half, and then got lucky with a cheeky Blitz kick-off to score under his nose, to win 2-1.


From Orcs to Dwarves, all the Elves' natural enemies... For my first action of the game, the Treeman knocked himself out... then James killed my Wardancer with his first action! He got a bit overconfident after that, and I was able to claw back a draw 2-2 in an enjoyable fight.


Virral is a long-time Australian Blood Bowl personality, but we don't play each other very often. We had a fun tight game, and he was able to equalise 2-2 on his last turn. I still suffered 4 casualties.


I was a bit mentally fatigued at this stage, and wasn't up to the challenge presented by multiple Guard Ogres and Sidestep Snotlings. I suffered a 4-0 casualty beating, but it was another 1-1 draw. Aaron took home the Stunty King award.


This Norse team had a lot of Tackle, and I was in another uphill fight. I was down to six players in the second half, but got one touchdown to lose 3-1.

So, at the end I had two wins, three draws, and two losses. I averaged exactly four casualties against me every game. Many of my second halves were quick as all I was doing was rolling stunned players over!

I was glad to take the Treeman- he gave me a few options and absorbed a lot of punishment. I eventually gave him Jump Up, which was excellent. My conservative plans were quickly scuppered by some bad rolls which left me in dire straits requiring ever-crazier tactics. I had many games with hardly anyone upright.

There were 34 coaches present, and I came 22nd. The winner, Luke, had Dark Elves and had six wins and a draw.

I forgot all my anguish when I received the award for Best Painted Team! Again!  [smug mode] 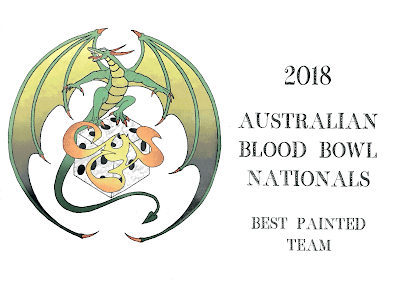 Next: other CanCon pics
Posted by Barks at 15:50 8 comments: 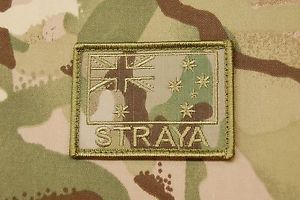 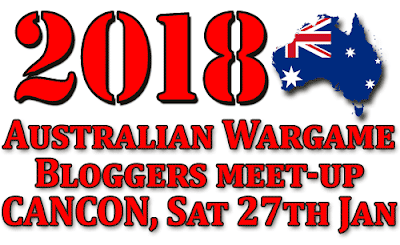 I'm taking the Entwives to Blood Bowl, I'll put up reports and photos from CanCon over the next week.
Posted by Barks at 08:28 6 comments:

I've finishing with the latest bunch of heroes from Imperial Assault, and I quite like them.

Firstest with the mostest is fan favourite Ahsoka Tano. She first appeared as an annoying young teen and Anakin Skywalker’s protégée in the Clone Wars animated series. She (and the series) later improved and matured, culminating in her breaking with the Jedi path having been accused of a crime she didn’t commit. She returned in the Rebels series as a grown woman, and it is this aspect of her that I have painted. She senses something familiar about Darth Vader... 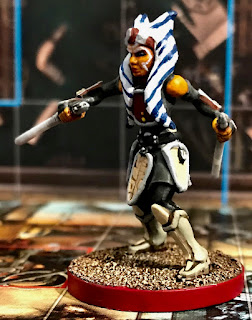 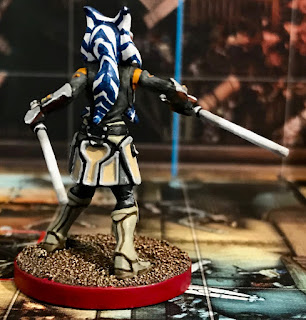 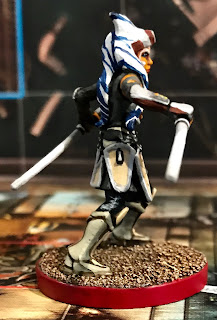 She was great fun to paint. She’s got an interesting colour palette, and some fine details on her front armour. Her head tails look better than they do in the blown-up images. She carries white lightsabers (in that distinctive but questionable dual backhand grip), which I painted a very pale glowing grey and I think came out OK. I decided not to do any significant OSL, as I struggle with just white and paler surfaces.

I didn’t feel so enthused by the next hero, Jarrod Kelvin. He strikes me as an impractical Wolverine-wannabe.

In contrast, I do like Ko-Tun Feralo. She seems an eminently practical Rebel.


Finally, I love Drokkatta. Consensus is that she’s female, and I’m not going to question a Wookie demolitions expert. With her wacky goggles, grenade launcher and thermal detonators, I can’t wait to get her into battle.

Heart of the Empire is the latest expansion for Imperial Assault. Here are the Imperial forces from that release, starting with the reason for it all:
Finally, a chance to use the Royal Guard!

Next, some Riot Troopers. I really like these figures, although I'm unaware of any canonical source. I've neatened up the bases since this picture was taken.
The next figures are Sentry Droids from the Rebels series. They're a little prone to twisting at the waist, but a simple paint job serves well.
The All Terrain Defence Pod (AT-DP) is a bit of a crowd pleaser, standing even taller than my AT-ST!

Finally, not Empire, but some mercenary scum of the shapeshifting Clawdite variety. They're based on the forgettable Episode II bounty hunter Zam Wesell. I wasn't really enthused by these figures so they got a quick paintjob only.