I dusted off The Battle of Five Armies after a six year gap. This is a boardgame from Ares Games about the climactic battle of The Hobbit. The Shadow forces are sweeping down onto an alliance of Men, Elves, and Dwarves at the foot of the Lonely Mountain. There are a number of key areas to be controlled, but they are too far apart to support each other. If the Free Peoples can hold on, more help will arrive. Bolg, the leader of the Shadow force, must press the attack in a battle of attrition...

Read on, and click to embiggen! The vantage point is from over the Eastern Spur looking south across the valley, as the Shadow (played by yours truly) sets its eyes on the Front Gate to the west...


Having not played this for many years, I was impressed with how much fun we had. The clashes are many and mostly predictable with enough room for chance, while cards and action dice add thematic events and uncertainty as to your opponent's options. Combined arms attacks and choice of terrain give you a slight advantage. Meanwhile, reinforcing an area or pressing an attack leaves other areas denuded and inviting for counterattacks. The ruins of Dale exchanged hands so many times!

As the Shadow player, I was hoping to get goblins pouring out of hidden mountain passes in a bold flanking manoeuvre, but this never eventuated. I was keenly aware that if I dilly-dallied, powerful allies like the Lord of the Eagles, Beorn and Thorin Oakenshield would absolutely ruin my day. This meant that I had to press the attack rather than build up my forces. The outcome was never certain, and we both thought the other would prevail at different times in this desperate battle.

The Shadow's brief high-water mark was at 12 Victory Points after the taking of Ravenhill, but this was reduced to 4VPs at game's end. Holding 10VPs at the end of a turn will win the Shadow the game.

I hope you can appreciate what a fun story this refight told!

My opponent, Amnese, has published a 20 minute comparison of Battle of Five Armies and War of the Ring on his YouTube channel:

I've been dabbling with 3D printing some scenery for Journeys in Middle-earth. I printed these gnarly trees from Printable Scenery and based them on 80mm bases. I was going to add Woodland Scenics clump foliage, but I wasn't super-impressed with the appearance after doing one. I thought the bare branches are actually pretty atmospheric and menacing. What do you think? Should I add greenery or not? Maybe a darker green?

I've finished off the assorted monsters from JiME: Shadowed Paths. I rebased the bigger figures on 40mm MDF.

The Balrog was featured last month, and I'm still really happy with him.

I used a dark blue-grey for the scaly bits, which I quite like.

I think they've named these after a throwaway line in Return of the King about the oathbreaking Dead of Dunharrow:

None of the people of the valley dared to approach [the Stone of Erech],

nor would they dwell near;

for they said that it was a trysting-place of the Shadow-men...

Similarly, from The Two Towers:
Far, far below the deepest delving of the Dwarves, the world is gnawed by nameless things.
Whilst painting the Nameless Things, I thought they looked like an a cappella trio, and now I cannot un-see this.
I'm not inspired by the concept, but I think they're handy generic monster models for other scales and settings. May their painting cleanse the world.

I was inspired by Mr Hunt's spiders. All the lines on the legs were more frustrating to paint than I expected!

Another oddly fiddly model to paint. Pretty satisfied with the final outcome.
Posted by Barks at 17:00 6 comments:

I was painting up Gandalf from Journeys in Middle-Earth: Shadowed Paths, and thought I would dig up other Gandalves I have procured over the years. I was a little shocked to find how many I have... and I also found two unfinished Gandalves that I had to complete.

I prefer the weary and grandfatherly Grey Pilgrim to the more proactive White Wizard incarnation. My older paintjobs worked up from black, but my new ones work from a mid-grey washed down with black shades and more highlights. My new ones include FFG's Shadowed Paths Gandalf, and the plastic Gandalf from GW's Thorin's Company. I like his fingerless gloves and silver scarf, but he doesn't have my favoured staff with the gnarled knob.

These are my two new Gandalves, painted this week:

I'm very happy with Gandalf on Shadowfax, which is a great sculpt. It was a good exercise in shades of white with cream or grey undercoats.
I am underwhelmed with this pose. I painted the face and hair years and years ago, but finished him this week.

These are from Ares Games' War of the Ring and Battle of the Five Armies. 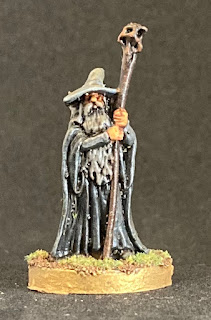 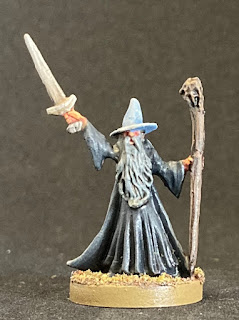 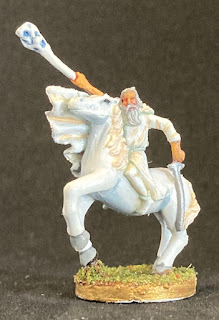 Here's a plastic Empire Grey Wizard, which I painted during GW's Red Period in the mid 90s. 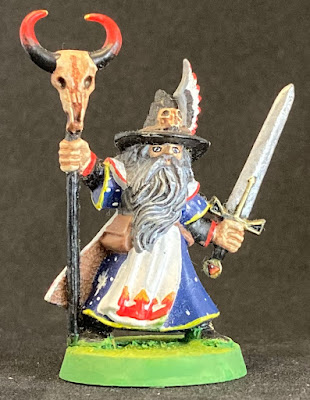