Or, the most expensive Umber Hulk I will ever own.

It is a nice sculpt, not huge, with some interesting grubs literally dropping off the beast. They are rad-maggots, that help heal its wounds. The kit includes two Borewyrms as well, which are the Ambull's larvae.

This is a battle report from our protracted Blackstone Fortress campaign. BSF is a dungeon crawler in space, with unusual grimdark characters filling the adventurer tropes and journeying into a mysterious alien space station to glean its secrets. They are opposed not only by creatures in the station, but also by the forces of Chaos, who want to control the Blackstone Fortress themselves.

Each Expedition takes four explorers and throws them against random challenges and encounters. They recover items which can be traded for upgraded equipment back at Precipice Outpost, and they also discover Clues. Finding enough Clues allows you to launch another Expedition with a climactic Stronghold mission; a more challenging encounter with added scenario rules.

Here's a Stronghold encounter, Into the Deathmaze. We've launched eight previous Expeditions so have a bit of experience under our belts. On this expedition, we've battled through some smaller skirmishes and challenges to get here and are a little bruised already. 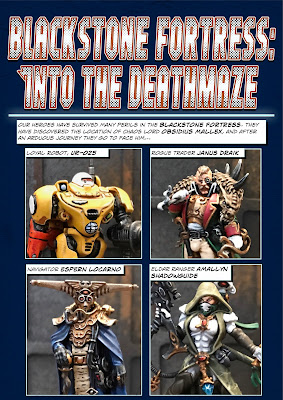 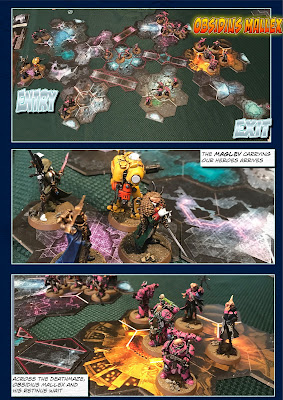 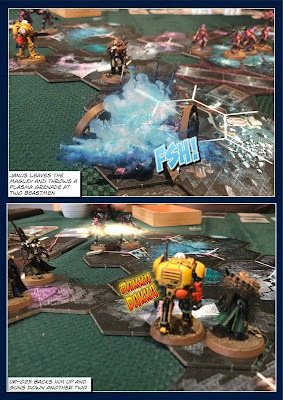 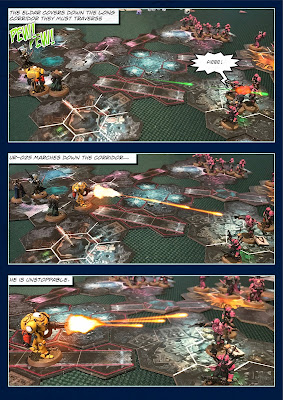 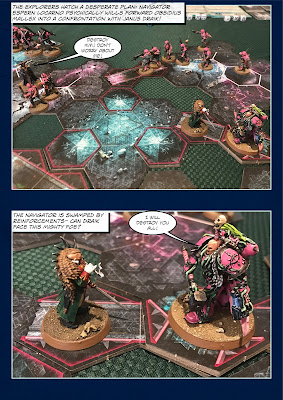 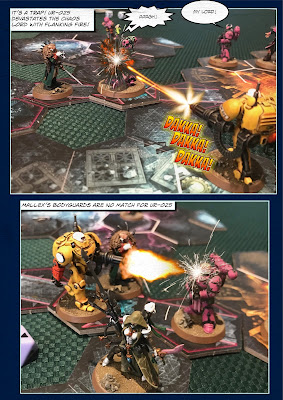 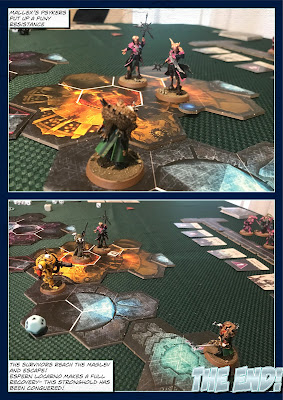 UR-025 is certainly a powerful tanking robot. But he couldn't have got there without Locarno's sneaky sacrifice!

I won't pretend it is a fantastic game, but the setting is fun and the figures and components are superb.  To be honest, it allows you to tell a nice pulp story. The new Escalation campaign expansion looks pretty good.

Whew! You are no doubt relieved to hear that I'm Bat-done with this Bat-project, from Arkham to Zsasz. I began in late May, so that is over three months of fairly steady painting. It was an achievable goal because it was finite, and I had a year in which to mentally prepare myself before a huge carton arrived. It was mostly interesting painting as well, with bright colours and nothing too complex. (Except for masks- I thought they'd make painting faces easier, but that is not necessarily true!) I had a deadline- which always helps- of the games we played a few weeks back. Towards the end, a lot of the figures were a basecoat and wash, without necessarily a highlight. 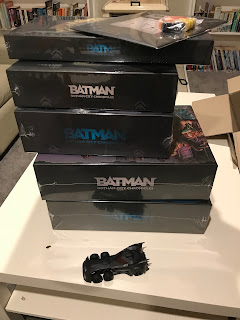 I did enjoy the research as well, immersing myself in bat-lore and trying to find the drawings the sculpts were based on. It was one way to celebrate Batman's 80th! If you were only ever going to read one Batman, I'd recommend Hush. Lovely artwork, decent story, and every Bat-villain under the sun. 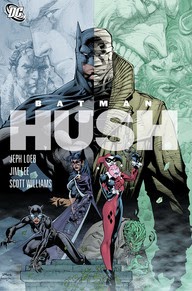 I have pre-ordered/ crowdfunded a few more Batman miniatures- not as many- and they'll arrive mid-2020, same Bat-Blog!

Indulge me in my wish-list for figures that I'd like which have not been made:

I'd love to see more of the comical/ kooky villains because the game can be a hilarious romp:


It comes with a decent selection of thugs and muggers, but I'd like to see some classier cannon fodder such as smartly-dressed gangsters and mercenary contractors. And some Rocket Penguins. And Dollotrons. And maybe some dedicated evil hackers. And a Bat-Signal!

Time for me to relax, revert to 28 and 15mm, settle back into once a week posting, and read something other than Batman.

Thanks for following this journey!
Batman will return to WwB in 2020.

PS After taking the Heroes and Villains shots above, I realised I'd left a few characters out- full marks if you work out who!
Posted by Barks at 15:55 8 comments:

"At least tell me what it looks like! [Batmobile speeds past] Uh, never mind."


There have been many Batmobiles over the years- this one certainly belongs. 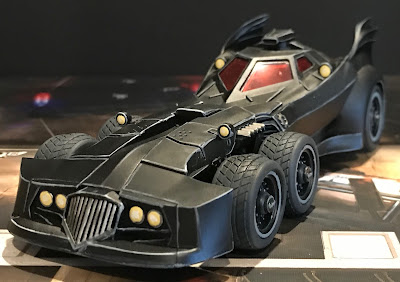 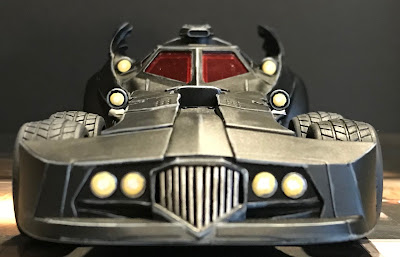 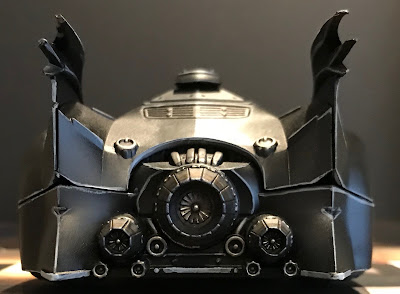 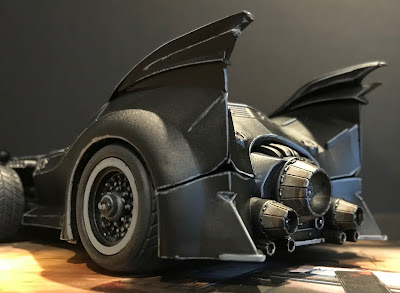 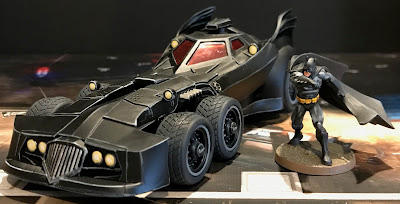 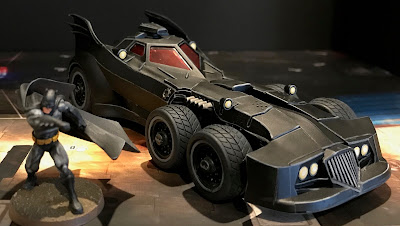 It comes with red transparent plastic windows, and I chose not to paint them. I removed the rubber tyres and taped the windows before spraying black, but couldn't disassemble it further. Then I edge-highlighted all the panels in medium and light grey. Madness. I then painted the metallics and lights, and added some heat-staining to the exhausts. I painted the tyres Panzer Grey. 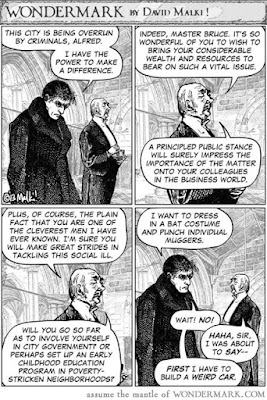 Tomorrow I'll post a group shot and some closing bat-thoughts.
Posted by Barks at 17:00 4 comments:

My final bat-batch of villains! A bit of variety today.


The Mad Hatter is a predator, hunting for girls to be his perfect 'Alice'. He drinks psychedelic teas, and has mind control hats. I chose not to paint his chequered trousers.


Henchmen of the Mad Hatter in his Wonderland Gang.


A true arch-villain, the Demon's Head is centuries old thanks to the life-prolonging Lazarus pits. Such criminal facial hair. He looks a bit like an operatic piratical vampire, unfortunately.

The Penguin remains a classic bat-villain, despite having no powers beyond a mind for criminal enterprise. And an armoury of weaponised umbrellas.


Painting his henchmen's nets almost drove me mad. I chose not to paint the insides, and did the weights lilac to match Penguin. I'm not sold on this- should I go back to black?

Gotham's Dr Jekyll and Mr Hyde, scientist Dr Kirk Langstrom becomes the monstrously named Man-Bat with use of his bat serum. It's a large figure, and was quite fun to paint.


Mr Freeze is an expert in cryotechnology to bring his frozen sweetheart, Nora, back to life. But he can't tolerate warmth, and lives a life of crime. I wish the model had a glass dome. I added some icy slush effects with a paste of Woodland Scenics' 'Realistic Water' and 'Soft-flake snow' and Secret Weapon's 'Ground glass' for extra sparkles.


Bane is a mercenary who can bulk himself up using the drug Venom, which is pumped into him from his backpack.


I quite like Tom Hardy's Bane, despite the absence of the signature luchador mask. Check out Bane's freestyle rap: 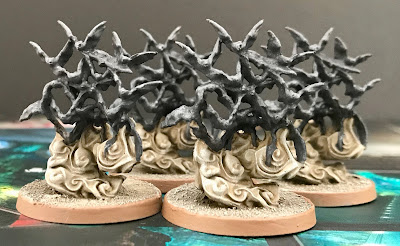 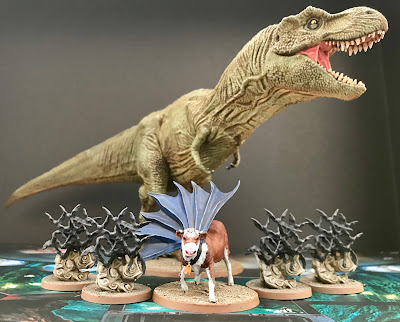