The 'Fuzzy Wuzzy Angels' entered Australia's wartime mythology following the publication of Sapper Bert Beros' poem of the same name in 1942. Modern review recognises a more diverse range of experiences for the Papuans.

Many a mother in Australia, when the busy day is done,
Sends a prayer to the almighty for the keeping of her son.
Asking that an Angel guide him and bring him safely back.
Now we see those prayers are answered on the Owen Stanley track.

For they haven’t any halos, only holes slashed in the ears,
And with faces worked by tattoos, with scratch pins in their hair.
Bringing back the wounded, just as steady as a hearse,
Using leaves to keep the rain off and as gentle as a nurse.

Slow and careful in bad places, on the awful mountain track,
And the look upon their faces, makes us think that Christ was black.
Not a move to hurt the carried, as they treat him like a Saint,
It’s a picture worth recording, that an Artist’s yet to paint.

Many a lad will see his Mother, and the husbands, weans and wives,
Just because the Fuzzy Wuzzy carried them to save their lives.
From mortar or machine gun fire, or a chance surprise attack,
To safety and the care of Doctors, at the bottom of the track.

May the mothers in Australia, when they offer up a prayer,
Mention those impromptu angels, with the fuzzy wuzzy hair. 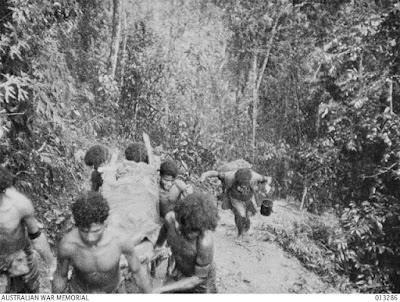 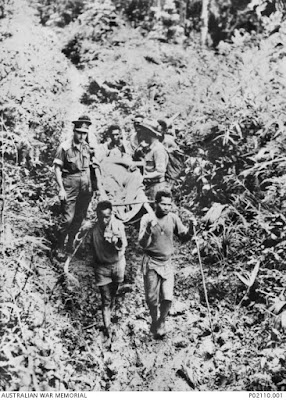 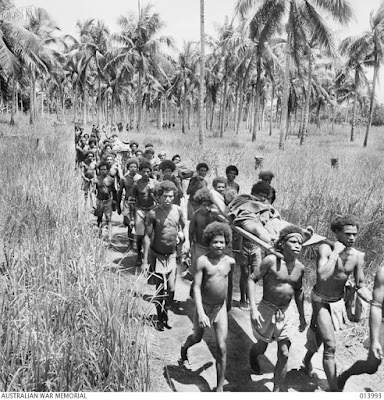 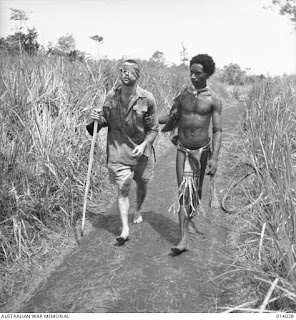 These figures are from Eureka, on a 60mm Rubicon base. I drilled out the hands, which was a little anxiety-inducing.  The Papuans were painted with Army Painter Leather Brown and two coats of AP Strong Tone. Their hair was Vallejo 70.899 Dark Prussian Blue with AP Dark Tone, which avoids going towards grey. I chose the terracotta skirt colour based off Dargie's painting above. 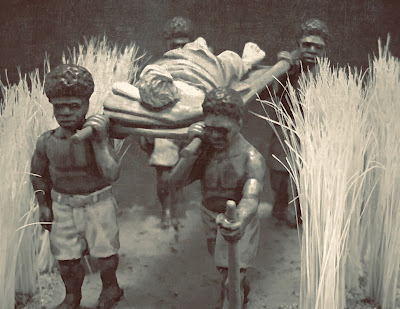 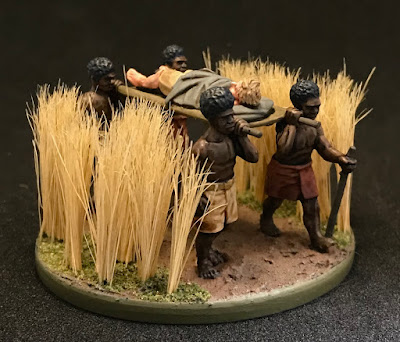 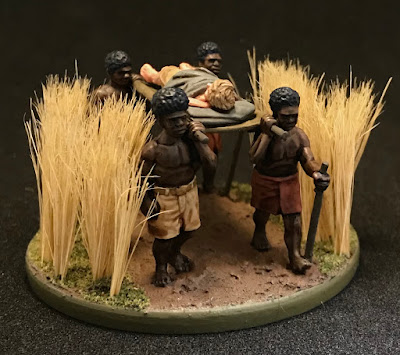 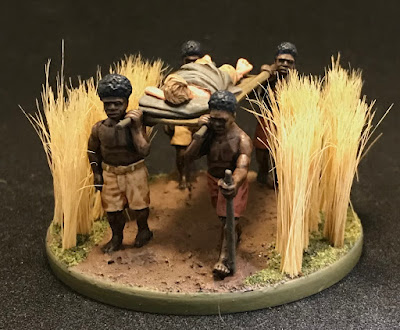 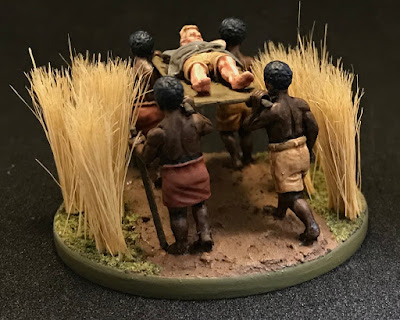 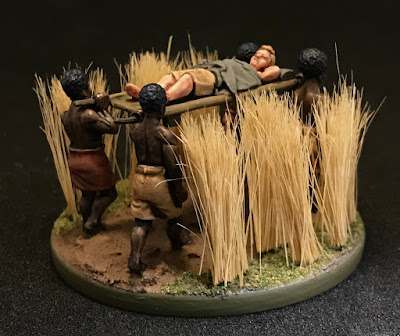 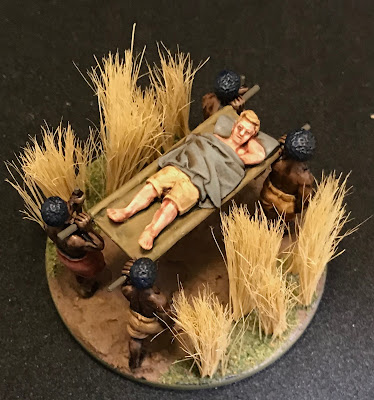 I chose to model kunai grass as seen in George Silk's iconic photo above. I used an old broken paintbrush and stained the hairs with Woodland Scenics Yellow Ocher, then glued clumps of it using PVA. I then individually picked out all the hairs that had fallen over or weren't attached. I am finding these hairs everywhere now... 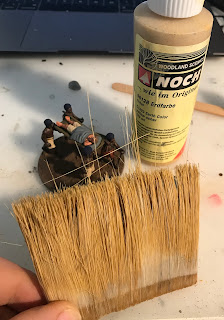 Painting and all other photos

I have finally finished the miniatures from the atrociously named Assassinorum: Execution Force. I got this game second hand, already assembled and undercoated, several years ago. I very carefully removed mould lines and then put the figures away to mature. I painted the Vindicare and some of the baddies in 2018, and have now completed the other assassins and all the cultists.

The Vindicare is a sniper with specialised weaponry and ammunition. I never had a metal Vindicare, but am pretty happy with the plastic one. It was tricky getting around the back of the preassembled model.  I painted him in 2018 for the Analogue Challenge 'BFG' theme round. 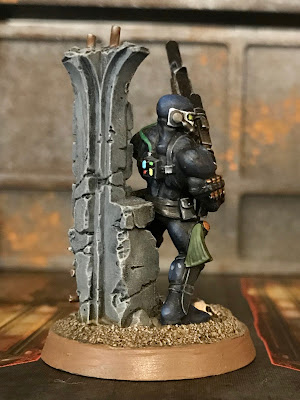 I'm not a huge fan of the dramatic-scenery-base for gaming purposes, but I grudgingly tolerate it for display purposes. The Eversor looks like the psychotic rampage beast he is. 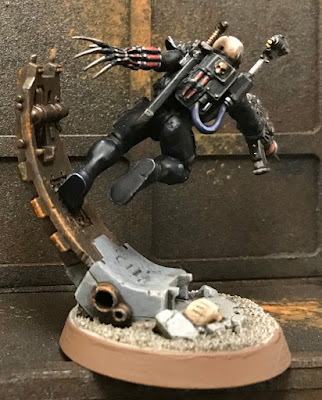 The Callidus can shapeshift to infiltrate her way amongst the Imperium's enemies. Her synskin gave me anxiety, but I got there in the end with blue-black washes over blue-grey highlights . 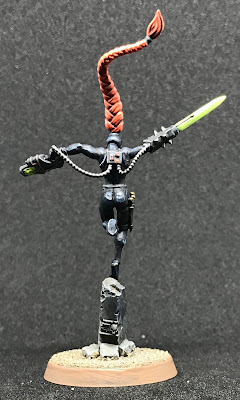 The Culexus is a psychic assassin who terrifies you to death. His Giger-esque helm looks like it would give massive neck strain. 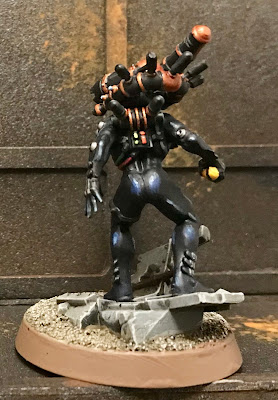 As a bonus for you, I dug up my old 1997 metal Eversor and Callidus. I have to respect the 2015 plastic updates which keep so much of the old design. I'm pretty happy with the old Eversor and its paintjob from 20+ years ago! I still haven't finished the old Callidus and probably never will... 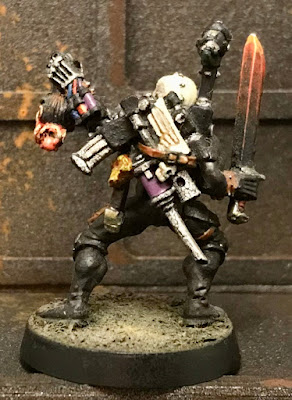 Finally, here's all the baddies from the game- one Terminator sorcerer, three Marines, one familiar, fifteen cultists. I will get a game report up on the blog at some point. 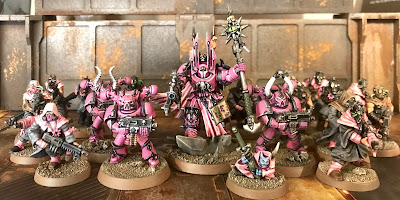