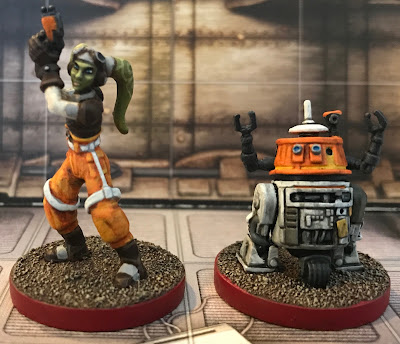 Hera Syndulla is a strong leader and skilled pilot. I struggled with her orange flight suit, but really enjoyed her overall. She's got a good colour scheme, and her skin is an interesting tone. I freehanded some concentric rings onto her lekku, which I'm pretty happy with.

C1-10P makes R2-D2 look like a model of decorum. He's a grubby astromech who is constantly grumbling, and his defining moment is when he callously pushes a rival droid out of an airlock in front of witnesses. There are Reddit threads about how many people Chopper has killed... I'm a fan, and he too was fun to paint.

Both these characters got cameos in Rogue One. I do hope I can complete the rest of the Ghost's crew.

I've been asked to show Hera's lekku patterns, and took the opportunity to show her face with better lighting. The patterns are a rough simplification, but I think they suffice. 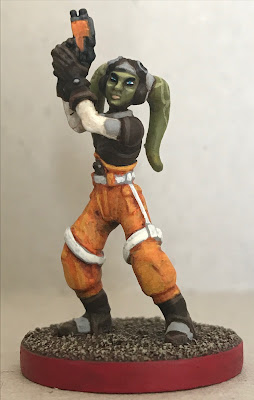 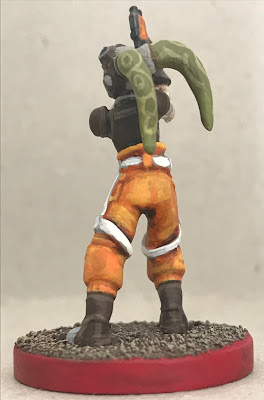 GW has released Shadow War: Armageddon (SWA), and I picked up the electronic rulebook to see what all the fuss is about. This is written from the perspective of someone who is familiar with the old rules- back in the day, I ran Delaque and Ratskin gangs. I've got a soft spot for Necromunda, despite its flaws. I sold it all many years ago, but had the foresight to keep a few pictures which will illustrate my commentary. 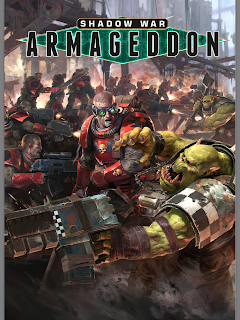 SWA brings warband skirmishes back to the 40K universe. Instead of Necromunda's underhive gangs, you can now use a basic squad of troopers. The rules concentrate on Space Marine Scouts, Orks, and Imperial Guard, but every 40K faction has rules for figures, wargear and special characters. You'll have between 3-20 figures per side. There are no vehicles, and power armour is the exception rather than the rule.

The rulebook itself is 200 pages (about 20 pages of rules, most of the rest is wargear and army lists), and is available in paperback or electronic format. It is full colour, with pretty photos, and some summary chart pages at the back.

These are lifted with minimal changes from the original Necromunda. It's an IGOUGO system where your side moves, shoots, then melees, then your opponent does the same. Combat is roll to hit, to wound, then save. Close combat is a roll-off, where the difference between rolls is the number of hits- wound and save as per shooting.

Any shooting hits which don't wound you will pin you, denying you actions in your turn. Most wounded players will be 'downed', and nearby friendlies will have to test to make sure they don't run.

When your gang has taken 25% casualties you have to test your leader at the start of each turn to see if your gang stays in the fight.

The missions are also straight from the original- meeting engagements, raids, scavenging missions, ambushes. You'll have to come up with justification for why your Dark Eldar are fighting Tyranids for scrap metal in in Imperial underhive, but the far future is not a place for introspection.

The campaign system is the biggest rules change from the original, and has been streamlined. In each mission, you gain 1-3 Promethium Caches depending on how well you do. When your squad has accumulated 15 Caches, you win overall. You can spend Caches to have, say, a Terminator accompany your Space Marine Scouts for a mission, but obviously this eats into your Caches, and if the Terminator goes down then your opponent gets a bonus. I like how Victory Points are expendable assets like this.

The experience and replenishing has been simplified. At the end of each mission, one chosen squad member gains a random skill or stat boost. You don't need to keep track of how many fighters he has taken out himself. Similarly, you get 100 credits to either put toward a new fighter or new fixed-price equipment. Unlike the original, you're not scrounging for cash and rare equipment, and there's no building up of your territory.

Another interesting use of your Promethium is to bolster your cash. If a figure costs over 100 credits to recruit, you can cash out a Cache to put towards the cost. This makes losing those cool figures all the more painful, as you have to expend your VPs to replace them.

In ripping an entire set of rules from over 20y ago, GW has also inherited some dated mechanisms. The most glaring is the IGOUGO system. It would have been fantastic to see some type of alternating activation, or randomised, or affected by a figure's initiative and leadership. This is the biggest missed opportunity in these rules.

Another area I would have liked to see more thought put in is the campaign system. All the factions are doing the same missions for the same rewards. It would have been nice to see some faction-specific goals, such as to gain new followers for cultists, or retrieve a number of artefacts for other xenos factions.

An area which could cause grief is the absence of any handicapping. There is no balancing mechanism between a starting squad and a veteran one which only needs to win one more Promethium Cache to 'win' the campaign. In contrast, Blood Bowl has an excellently honed inducement system to give the underdogs a leg-up.

Shadow War is an easy entry to the 40K galaxy. Any plastic squad will suffice, and give a fun game between like-minded opponents. It should be easy to find opponents.

This is not going to give you a perfectly balanced, competitive game. Neither is it going to spell out the tale of how your squad helps win the larger war- you'll have to justify a narrative to suit.

Shadow War is functional, but a missed opportunity to add some interesting activation mechanisms to an old ruleset.

Do you know what I think would be cool? A plastic set of armed 40K civilians. They could be used for desperate colonists, press-ganged militia, a zealous mob, cultists or gangers. Maybe the future is too grimdark to have civilians explicitly in the game.

I picked up Runebound recently- here are the heroes from the base game.

Runebound is a fantasy adventure boardgame, where your character rushes about a gorgeous map, skills up and gets better equipment, before fighting a big bad monster at the end. You're trying to do it before your opponents, so there's no time to take things slow. There's a fun combat system where you're flipping tokens rather than rolling dice.

I painted up the heroes, spending a bit more time on them than was probably warranted, but they're a good palate cleanser. I followed the character art for colour choices.

I was pleased with the blue tone on Lord Hawthorne's sword.

Master Thorn has a headache and a chilli on a stick.

Corbin is an angry dwarf (tautology?), who is the only character who can attack other players directly.

Elder Mok is a wandering ork shaman with a drum on his back.

I like the autumnal tones and wild hair of Laurel of Bloodwood.

Lyssa is a cat-person, and I used more sandy tones for her skin.

This is an Acolyte Hybrid Iconward for my Genestealer Cult. I've had a few things keeping me busy recently, so the blog has been neglected, but now they're done I treated myself to this overpriced plastic figure.