Clearer and nearer now the bells jingled, and clippety-clip came the quick running feet. Suddenly into view below came a white horse, gleaming in the shadows, running swiftly. In the dusk its headstall flickered and flashed, as if it were studded with gems like living stars. The rider's cloak streamed behind him, and his hood was thrown back, his golden hair flowed shimmering in the wind of his speed.
The Fellowship of the Ring 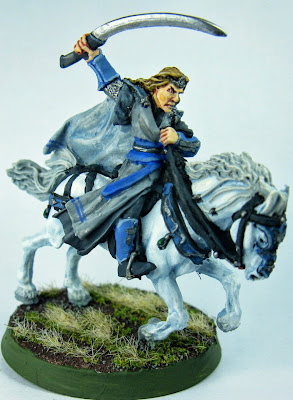 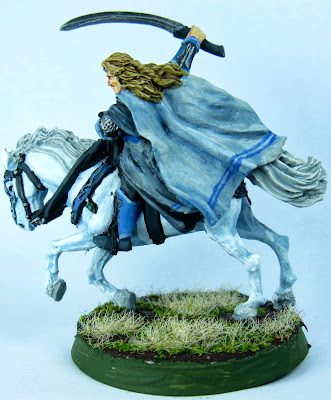 This was for the One Ring's June painting challenge. I'll be honest, I didn't really feel the love while painting this chap. I picked him up dirt-cheap second-hand, already assembled and sprayed black. I oversprayed white and painted greys and blues, but realised as I went that there were a lot of mold lines etc. still remaining. I painted him in a hurry (in one afternoon!) and took shortcuts, and it shows, but at least he's done. I know I get stuff finished when there's a deadline involved, and I do appreciate these One Ring opportunities.

I may patch him up later; at a minimum the dodgy base rim. I also need to paint his dismounted version.
Posted by Barks at 16:57 14 comments:

This is Playing Dead, my Blood Bowl Undead team.

And these are the Zoombies, my Necromantic team. There's a lot of crossover between the two, so I've bundled them in the same post.
The ghouls are conversions of Warhammer figures, mostly with weapon snips. One of them was holding a rock which became the basis for a football, and I really like his pose. The Necromantic team can have up to two ghouls, while the Undead get up to four.

The zombies are quick greenstuff conversions I made a few years ago from plastic Warhammer zombies. I give them big shoulderpads like NFL players, and used paper clips to make the helmet bars. They're rough and ready, but a dark and dirty paintjob helps hide my failings.

The wights are from Reaper, and I'm really happy with them.


I dislike mummies in my Euro-gothic horror, so on the Undead I used Frankenstein's monsters as proxy mummies, and haven't got any skeletons on the team. Eventually, I might get some. The monsters are from Reaper and Eureka. I greenstuffed over the Eureka jacket and gave it a bit more of a camouflaging paintjob. I would like to find two similarly styled figures for these two hulks.


The Necromantic team gets two werewolves, which are from Westwind's excellent gothic horror range.

I use this fun figure as the Star Player Hack Enslash. He, too, is from Reaper.

This is my coach, the mad doctor, also from Westwind.

Finally, my gravestone reroll counters come from the Warhammer zombies box. I love the iconic fist.

I went to Biff in the 'Riff yesterday, a 120kgp regen one day Blood Bowl tournament at Tin Soldier Penrith. There were twelve coaches. I took Playing Dead, my Undead team. I didn't do particularly well, but had a lot of fun and caught up with old mates. It was a particularly relaxed tourney, with no time pressure, and as a group we decided to end it after three games rather than four to prevent the day dragging on.

I had two mummies, three ghouls (two with Block), five zombies, two wights, and Hack Enslash with a chainsaw.

In my first game, the stadium didn't come alive as my Undead faced Creature's Undead, Mortuorum Ambulantum. Creature had left his dice at home and had to borrow Sangraal's, which didn't really work out for him! I had a strong first half, stopping his offence and scoring, and he rolled more than his fair share of double skulls in the second. Hack hit himself with the chainsaw twice, then got sent off for fouling. I won 2-0, 2-0 casualties. Disgusted, Creature went home to get his own dice!

In the second game I faced D'Arquebus' halfling team, Custard. I just couldn't stop him, or break his measly armour. Hack was on the pitch for only one turn. Also, he'd presciently selected Zara the Slayer (there were at least two Undead and a Khemri team). I suffered a 1-0 loss, and 3-1 against for casualties. Dismally embarrassing.

Finally, I played Gnome's Wood Elves, the Pink Panzers. He had two Wardancers, ten line elves with a fair smattering of Block, and a Treeman. I was able to score and foul one of the wardancers off the pitch early, but couldn't do enough damage to prevent a 3-1 loss, 2-2 casualties.

All in all, it was a good relaxed meet and a nice warm up for Eucalyptus Bowl in a fortnight.

I didn't get as much enjoyment out of Hack Enslash as I would have liked, and could have got an extra six skills for the cash. Still, the potential for dismembering amusement was there...

I haven't got much painting in recently; instead, I've been gaming. I dusted off Mansions of Madness, and have played three of the new scenarios from the Call of the Wild expansion. (See my miniatures here and here). The Dwarven One took the pictures. There are no pics of the first one, but suffice to say the Dunwich Horror was nigh unstoppable. In the second game, the investigators had to deduce the murderer's identity before he (or she) struck again. Here's Amanda Sharpe, who had no luck in the game whatsoever, facing a cameo appearance from the Dunwich Horror. I'm pretty sure that shortly after this she fired, missed, dropped the gun, turned to run, tripped, and died, handing the game to the forces of unspeakable darkness. 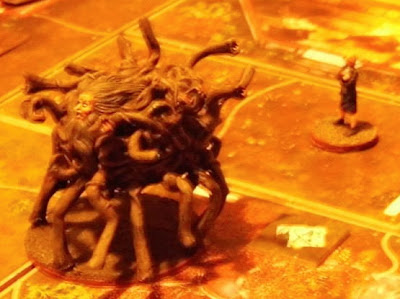 We played the survival scenario, which has an automated keeper. Things got nastier and nastier. Here's Jenny Barnes surrounded by a Child of the Goat, two cultists, and a witch. Jenny gunned down a cultist and ran but the witch stunned her and the other cultist killed her by the
river. 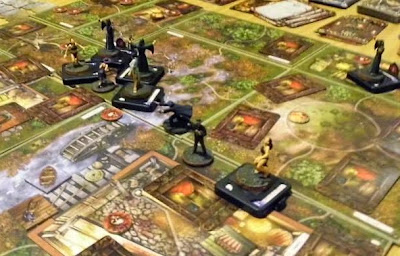 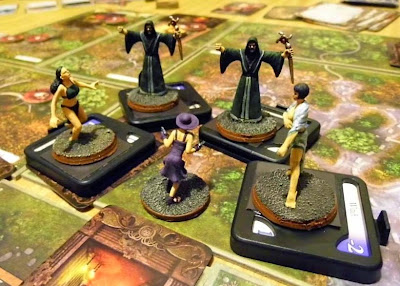 Monterey Jack tried to hide in the water mill, but the monsters caught him and a Mi-Go put his brain in a jar. As Diamond Joe, I went swiftly mad well before that, and ran around the place setting everything on fire. Then I burnt to death. 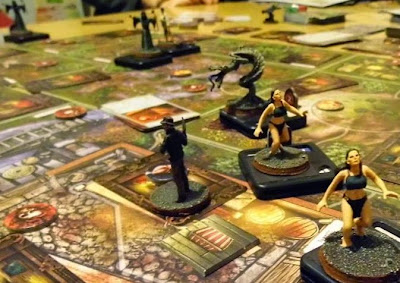 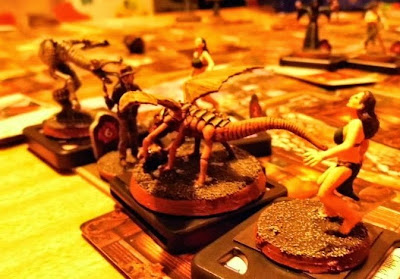