An Australian infantryman with SLR from the Vietnam war.  This is a 54mm OzMade piece I painted with acrylics about 15-20y ago. I think it stands up OK. The groundwork was made of Blu-tac, superglue and sawdust... It could do with some better grass and foliage. 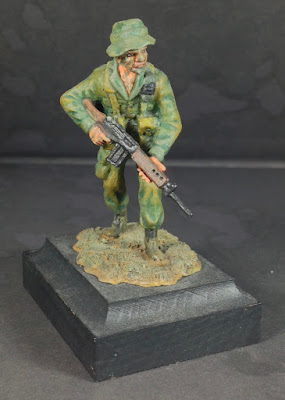 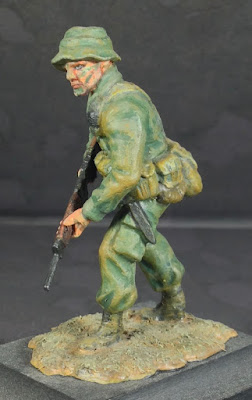 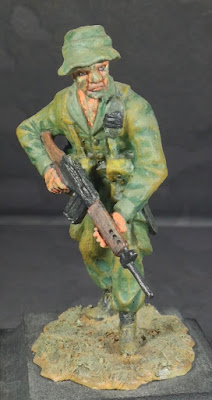 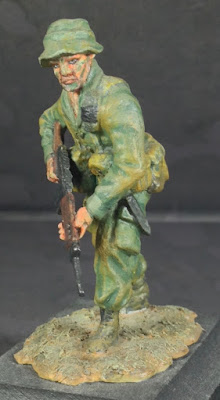 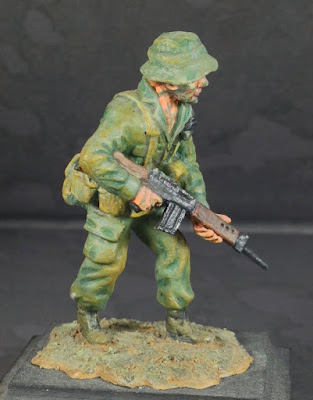 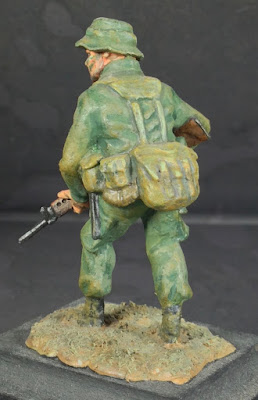 Australia was involved in Vietnam from 1962-1975. The main infantry force was composed of rotating battalions from the Royal Australian Regiment, or RAR. The iconic small arm was the L1A1 SLR.

Photos via Google Images
Posted by Barks at 12:00 12 comments:

I needed a new team for the Brewcastle Cup, but only had a week and a half to start and finish it. From my small pile of Blood Bowl lead I found that Meiko's Kaos Pact needed the least assembly, so they were it!

I decided on a Tzeentch-theme with blues, golds, bone and yellow and lilac. There isn't much of a coherent style between the figures' armour, so I went for a predominantly uniform blue scheme.

The Marauders were quite straightforward, particularly as they have no faces!

I gave the Dark Elf grey skin. The Skaven and Goblin were quite straightforward- I will be looking out for a Goblin Two Heads/ Big Hand conversion opportunity.

The Big Guys are really fun sculpts, and I enjoyed the different skin tones tied together by the blue and gold. I put them all on 32mm bases- the 40mm they come with are too big, and I had a few 30mm which were a little small.

I accidentally dropped the Troll at the tourney and broke off his claw! It has been fixed now. His tentacle is rather disturbing... 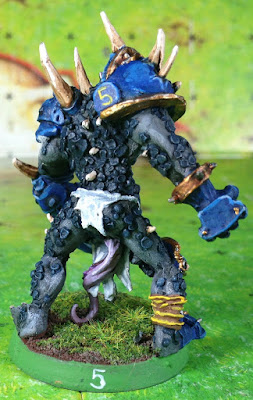 The Minotaur was a pain to assemble and base. I'm happy with the overall effect, and the tail. 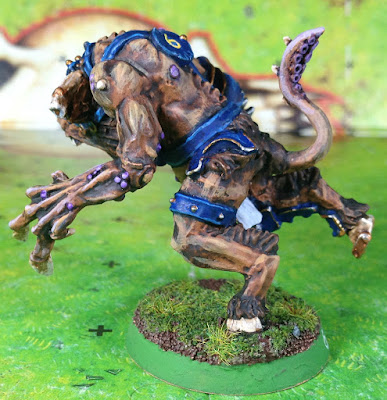 The Ogre was easier to paint than I had anticipated. A few light coats of lilacs and purples on his better half really make him stand out. 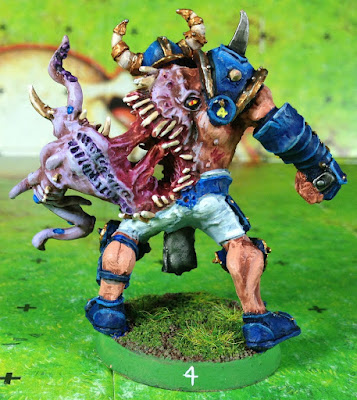 I participated in the inaugural Brewcastle Cup yesterday, with my new Tzeentch Chaos Pact Team, Changer Zone- (full team pictures in my next post). My roster was:

Here's how my tourney went:

Game 1- Simon's Lizardmen, the Southland Salamanders. I could not get going in this game, with his lizards able to outpunch and outrun me. I killed my own goblin trying to throw him... I went down a sobering 4-0, with 4-4 casualties.

Game 2- Gergy's Goblins, Samurrrai Storrrm. I was concerned about facing this Japanese-themed team, as they had a plethora of secret weapons, including a Hail Mary Pass bomber, and a full roster of replacement players. To add to my disquiet, before the game even started my Minotaur was taken out by a thrown rock!

However, my luck came back, I survived the onslaught, and set about dismembering his team to win 5-0 with 7-2 casualties. My goblin was superbly cheeky here, being successfully thrown about the pitch to score three TDs. Gergy had rotten luck- I got two blitzes against him, and every time he got his Kickoff Return player under the ball, some event would occur that left him unable to catch it. The tourney went well for him otherwise, and he came away with the Stunty King award.

Game 3- Vimes' Beermen, an Arabian-themed Norse team (he knows it is weird!). I always have great fun games against Vimes, whatever the outcome, and this was no exception. I had a shocking start- on my very first action, my Minotaur seriously injured himself and missed another whole game! Then, on my second turn, my Ogre fell over on his first action, leaving Vimes able to waltz in for the easiest TD ever. I was able to equalise, and a gruelling second half ended with Vimes touching down for a 2-1 win on his last turn, with a 3-0 casualty count his way. This was karma after my Halflings robbed him of a win at CanCon in January.

Game 4- Richard's Chaos side, Eyescream. He had a wizard, one Minotaur and the rest were Beastmen (no Warriors). We both appreciated the mutual Tzeentch worship here! My goblin and dark elf got taken out (the goblin being burnt to death by the wizard, and the elf killing himself with a bad leap!) so it was down to the big guys and marauders. The two minotaurs ended up in a clash of titans for most of the second half- there can be only one! I got onto a bit of a roll, and by the time the final whistle blew Richard only had two Beastmen on the pitch, leaving me a 2-0 win, 4-2 casualties.

I was pleasantly surprised by the Chaos Pact. They are a stronger team than I had anticipated. The Marauders are quite capable by themselves, and the Big Guys have enough tabletop presence to cover for each other when they go stupid. Leap on the Dark Elf gave me many options, but I never used his Horns. The mutated Two Heads, Big Hand goblin is amazing- able to dodge around on a 2+ and pick up the ball on an unmodified 3+, not to mention the ability to be thrown!

There was an impressive turnout of 34 players. Gnome was the overall winner (Chaos Dwarves, I think). With two wins and two losses, I think I came 13th of 34. As usual, it was great to see old friends again.

The one day format worked well, and four games was managed with an on-time start and tight timekeeping, including chess clocks. I think this tourney has a workable format and fills a geographical gap in the Australian schedule, and I foresee good things for it in the future.
Posted by Barks at 18:43 2 comments:

I've accumulated a small collection of miscellaneous Blood Bowl figures over the years.

This is my interpretation of Thrud the Barbarian, a Star Player who sadly doesn't exist in the current rules edition. It is a conversion of a Hasslefree figure, which I picked up from Crusade in Cardiff in 2005! Hasslefree must have been about a year old as a company, and this figure has sat in my pile of shame for over a decade until I dusted it off for the Analogue Challenge 2016! Foolishly, I primed it on a humid day and it is a far from smooth basecoat. It doesn't show from a distance, and I was in a hurry, so I let it slide. 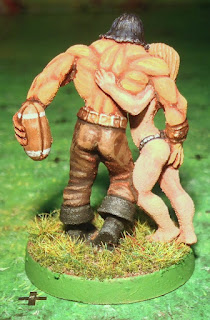 I'm using this figure as Zara the Slayer. I can't recall for the life of me who made it. I believe there was an original variant sculpt wearing even less... 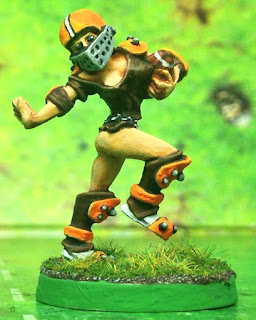 Here's a team wizard, straight from Unseen University's wardrobe department! A cool figure from Impact! Miniatures, he's got the fireball and lightning bolt spells on his belt. Could do with a funkier staff, though. 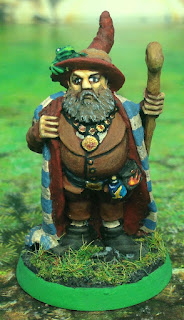 To accompany him is Pete the frog, also from Impact. 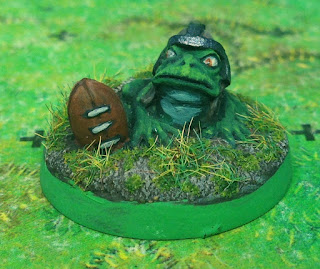 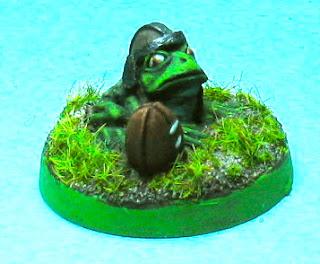 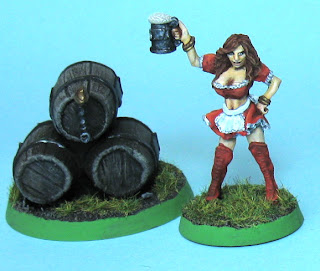 I've already shown her Dwarf counterparts, but I think they belong here as well.

Here are two human referees. The first is an original GW figure c1991. 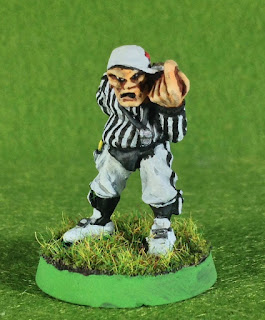 The second is from Shadowforge. 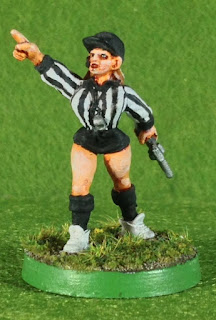 Finally, a goblin reporter, which was a variant from Impact. CCC was the Central Coast Corsairs, a club I was involved in about 10y ago which has gone the way of many gaming clubs. 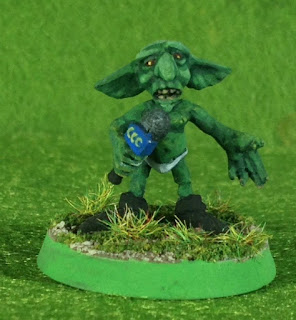 Under the Tusken sun

How can you not like Tuskens? Here are my painted Imperial Assault Tusken Raiders, and their pet Bantha.

I was fascinated to discover that the original bantha was an elephant in disguise!