Gallius still can't find a patron, while the rest of the crew look for jobs and other goods. They manage to acquire a crate of six grenades. EF-733 tries to fix Julio's broken rifle, but is interrupted by a warning cry! The Neon Widows must have spotted them in the markets, and are coming to punish former gang-member Roma. The crew only have a few moments to drag some barricades into a hasty defence...

The crew held the field, and 'liberate' some damaged weapons and other goods from the cargo crates. EF-733 is able to trade these with his contacts for a mighty 14 credits, but Julio is more concerned about Roma. She has suffered a potentially crippling injury, and Gallius grudgingly pays one credit to a rogue doc so that she will only have to spend two turns in the sick bay.

I rolled ten 'Brat Gang' rivals, and things were looking pretty dire. I planned a desperate defence with Lady Heldycryn and EF-733 dropping back to cover the barricades with rifle fire, and hopefully causing some Escher to run with their brittle morale. I rolled a battlefield event at the end of round two, which said that the Escher had lost heart and would bail after round three- but then they got a lucky shot and took down Roma. So I said they had done what they came to do, and had punished Roma for daring to desert the gang- for a man! The Neon Widows lose their 'Rival' status.

I got the Wargames Atlantic Raumjäger at Cancon 2020. You get 24 figures in the box, and so far I've only painted these eight. There are six sprues of four figures, with options for arms and heads. You have weapon options for an G36/ las hybrid, plasma gun, flamer, SAW, and pistol. There's a radio and some pouches as well. There are some helmet-less heads with Bergmütze-style caps. I made some minor conversions and did a quick paint to get them ready for Five Parsecs. 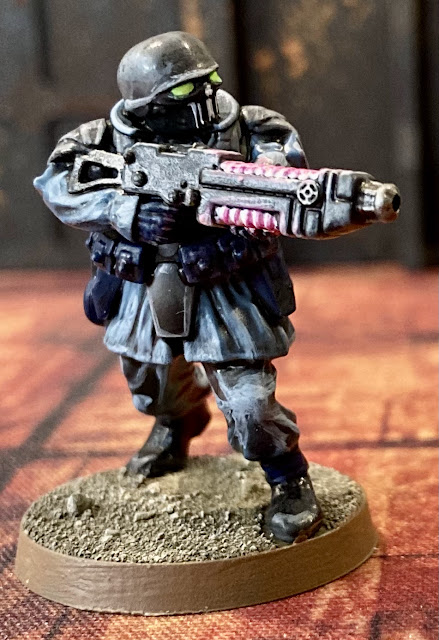 They're quite fine sci-fi troopers. I would like to see some support or command sprues at some stage. I'm not sure if I will paint the rest similarly or not, and I might do some different heads for variety.

The crew don't really trust teach other yet, but Gallius says he has an easy mission to gain them some cash so they can get off-world. He'll need to ex-load some data from the Merchant Guild cogitator. He knows there is an access point in a cargo cavern which will be lightly guarded, and anyway they'll be hidden by steam from the vents. Easy.

I did my crew actions, then rolled a 'Deliver' mission against 'Corporate Security' with 'Limited Visibility'. I managed to roll seven enemies... Visibility is D6+8" each turn, so maybe I can get to the cogitator without even being seen...


The rest of the crew beat a hasty retreat through the steam.
A technical victory! Gallius was able to access the cogitator, but he and Julio were wounded. It was my first game, and I forgot a lot of rules in the heat of the moment- like Luck (to keep you alive), and Dash (to get you forwards faster). Then I rolled 'Dead' for Gallius, and spent a Story Point to reroll it, and got the same outcome! However, there's a rule that you can permanently lose your Luck point to stay alive- so I did that. My team is now Luckless, and I'm not sure they're confident in their employer...
But was it worth it? They gained only three credits, and the data hacking reduced their Ship Debt by three as well.
Gallius lies and tells his crew it was a great success, and they have struck a great blow against the corrupt guilders. But privately he is worried that he won't be able to get enough cash to start realising his ambition of becoming a Rogue Trader...
To be continued!

I'm excited to commence a Five Parsecs from Home campaign. I actually have the first edition, but the very nicely presented new third edition has inspired me to really get into this science fiction game. FPfH is a solo campaign game from Nordic Weasel. You have a small crew who undergo skirmishes and get experience, credits, and gear. The game is as much about the firefights as it is about the events that happen between games. You can gain recurring opponents or have to flee invasions. The combat system is simple, and the campaign possibilities are vast, driven by D100s and dozens of tables. 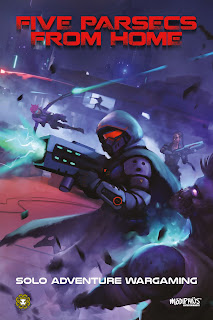 The vibe is Firefly with alien cultures, Star Wars without The Force, Rogue Trader rather than Kill Team. It is in this 40K setting that I have rolled up my starting crew. I rolled the dice for six characters, getting a scent of their background and motivations. I used a name generator as well. I cast my gaze over my toy collection and let the ideas coalesce...

We find ourselves on Necromunda. The captain is Gallius Marbic, a disaffected merchant who wants to make it big and feels he is being held back by the power of the Guilds. He wants to build up some cash reserves before taking his crew out into more dangerous territories and becoming an accredited Rogue Trader. He has acquired a small battered freighter, The Innominate, that he will have to pay off.

He is accompanied by Lady Heldycryn de Quenaal, a diplomat's daughter who is keen to get offworld and experience adventure.

Somehow, EF-733 has become attached to the crew. This strange acolyte wants to become famous within the Mechanicus, either by cataloguing xenos species or discovering lost artefacts. His bizarre affectations are tolerated by his companions because of his mechanical abilities and connections.

They have hired Konrad Rathgir, a street-smart outrunner. If he's as useful as he claims to be, then he will indeed be an asset. But is he as good as he thinks he is?

3D print from Imitation of Life. I really like the aesthetics of this sculptor's growing range.

For protection, they have also taken onboard Julio Rybeck and Roma Jyan as muscle. These star-cross'd gangers have upset their clans and also want to get offworld. Their original gangs are after them...

I'm planning for this to be a slow burn. I'm going to roll with the punches and see where the system takes the crew. I'm looking to fire up my 3D printer for various enemies and characters as I roll the encounters, and selectively delve into my backlog. The gangers and AdMech were useful as test schemes for more in the future.