More quickies- just a basecoat and shade for these figures.

Harley Quinn, rogue psychiatrist, has an interesting path. Her character was first seen on the 90's animated Batman show and became a fan favourite, transitioning to comics and the silver screen. Originally (but no longer) the Joker's girlfriend, she has somewhat struggled to throw off the shackles of that strong association. 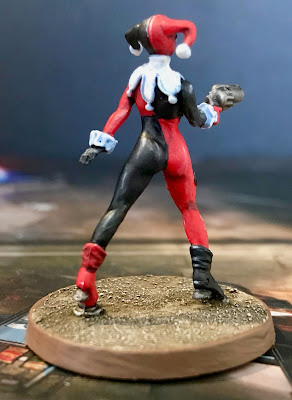 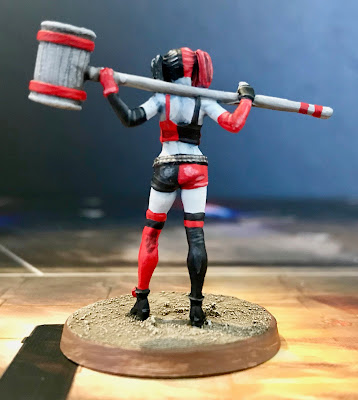 She's got a strong colour scheme. I really think I nailed the skin tone on the more modern Harley, IMNSHO.

I meant to get these bat-fodder painted up much sooner, because they're generic and are used in many of the scenarios. But their blandness and the choice of painting them all differently really took the wind out of my sails. They were pretty much all a base and a wash, yet took longer than they should have.

I have been geeking out recently about the 50th anniversary of the Apollo 11 mission. I have always been fascinated by space travel and exploration, and the work of these pioneers still moves me.

I treated myself to a Lego Lunar Module, which I built with the Skirt Swisher: 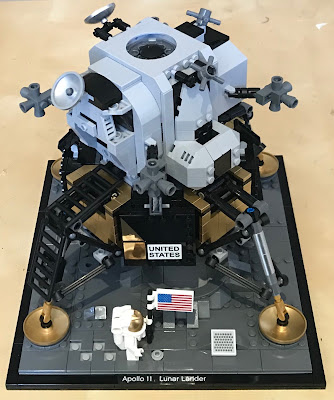 I've really enjoyed the BBC World Service podcast 13 Minutes to the moon. I can also highly recommend the documentary In the shadow of the moon, about the space race in general.

I've heard of the HBO series From the earth to the moon; is it any good? What about First Man?

Email ThisBlogThis!Share to TwitterShare to FacebookShare to Pinterest
Labels: Lego

A strong point of the Batman comics is their villains. I recently read that they are often characterised by sympathetic motivations taken to violent extremes.

There's a variety of figures here; from the familiar to the completely unknown.

I've never been a huge Two-Face fan, but he was fun to paint.

Black Mask is a dapper underworld figure, with a black skull helm fused to his head. He is often rather witty and enjoys his life of crime.

Mister Bloom and his minions

I'm not a Bloom fan, and didn't spend much time on him. He's got special seeds that he implants in people to manifest evil superpowers.They've actually sculpted the strange net gloves he wears, but I decided not to paint them as it would look odd and take precious time.

Wrath is like an evil Bruce Wayne- a billionaire, orphaned young when his parents were gunned down by Gotham cops, he goes out at night and terrorises the police.

I hadn't done digital camouflage before- over a solid VJ 874 US Tan Earth I painted Tetris-style shapes in VJ 984 Flat Brown and VJ 819 Iraqi Sand, then a few square dots of US Tan Earth again. I tried to get the angles square, and am pretty happy with the outcome. Wouldn't like to do a lot of it...

Where do these criminals find their tailors? Tusk is an underworld figure who is somewhat elephantine. I used a thin blue-grey wash for shading.

Clayface was an actor who had some sort of industrial accident and became able to morph into other shapes or people for brief periods. He's one of the biggest models in the game, and quite easy to paint. 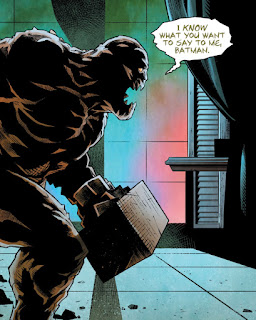 I really didn't like the flight stands that came with these Batman drones, so I bought some magnetic clear acrylic ones from Back 2 Base-ix in Adelaide.

I chopped off the existing bases and drilled a small depression using a 7/64" bit on my Dremel. I superglued the round magnets in place after checking the alignment.

I assembled the flight stands using plastic cement, and superglue to hold the cube magnet. I thought about painting and texturing the bases, but have held off so far- opinions gladly received!

I like that they come in two heights- 33 and 45mm. I can detach the drones and use the bases for other magnetised flying things.

My sole gripe is that the bases are 32mm despite being described as 30mm.

The Court of Owls

Beware The Court of Owls,
that watches all the time,
ruling Gotham from a shadowed perch,
behind granite and lime.
They watch you at your hearth,
they watch you in your bed,
speak not a whispered word of them,
or they'll send the Talon for your head.

The Court of Owls was a cool invention of Scott Snyder during his run as Batman writer. They are a shadowy cabal of upper class Gothamites who, for centuries, have steered the city's course in secret while wearing owl masks. The above nursery rhyme refers to their ninja-esque assassin, the Talon.

I took my Slann team to Eucalyptus Bowl 2019 last weekend. This was the 15th Euc Bowl, and there were 61 coaches over the weekend.

The winner's trophy has been reimagined in this spectacular shield. The logo is fully 3D. Spoiler- I didn't win. 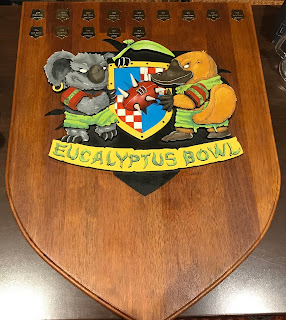 Redcard is a strong player, with a strong team, and I wasn't surprised at taking a 2-0 loss. I finished with only two players on the pitch... I did kill a Mummy, but it regenerated.

Gergiy flew his nerd flag high, dressing as a vampire in evening wear with a white bowtie and cape. His team was a mixture of manufacturers, with some old-school vampires and victims. Vampires can be challenging to coach (as I found at Euc Bowl 2013) and I was a little bit surprised to lose 3-0.
In these first two games I just couldn't seem to succeed in any of my dice rolls, which happens occasionally.

It's a frogathon! I was looking forwards to this frog-on-frog action, but again, the dice seemed to betray me. I hesitate to blame the dice, as to an extent you place yourself in positions where you need to roll them, but compared to the ease with which Luis was hopping about and hurting me, I was just tripping over and hurting myself. Despite the 4-3 scoreline, it felt a lot more one-sided. I hadn't met Luis before, but he was a good bloke. After three losses, roll on Day 2 and a reversal of dice karma!

Rabid is a very strong coach, and was running the tournament. He had a lovely pirate-theme goblin team. He gets to play the poor inexperienced sap at the bottom of the rankings if noone else is available- and that poor sap was me! He asked me what had gone wrong for me, and I shrugged that the dice weren't really working. Then he watched amazed as I then failed at least half a dozen basic dice rolls... and he took me apart. I suffered a crippling ten casualties... another 3-0 loss.

Finally, the dice gods got bored with me and wandered off. I had a much more 'as expected' game against Hypnotoad, which was very enjoyable. It was a good match between his slow but strong team against my faster but weak side, and I pulled out a 3-1 win with a cheeky two touchdowns in the final two turns.

Like the previous match, my dice behaved in a more average fashion and I had the kind of game I had been expecting. I was 3-2 up and got a bit overconfident at the end, and almost gave away a touchdown. I was very relieved to pull out a second win.

So, two wins and four losses. Overall, I came equal 40th out of 61 coaches. I would have expected better but was relieved it wasn't worse! I don't like blaming dice, but when you literally fail everything you try to do on a 3+ over and over, you get a little demoralised...

It was great to see old friends again. I haven't played Blood Bowl since last Euc Bowl, and was a bit rusty. I'd consider Slann again with some changes- in particular, taking a Blitzer with the Guard skill. I really needed all four rerolls.
Posted by Barks at 17:00 8 comments: