25th March is Tolkien Reading Day, to commemorate the fall of Barad-dûr and the destruction of the One Ring. In my quest for the perfect Lord of the Rings ruleset, I tried Dragon Rampant for the first time. I threw together two forces, we agreed on a rough scenario, and had at it!

30 points; Defending the crossroads on foot with mounted forces to the rescue.

We started with the Rohan foot around the crossroads, and all other units would move on from the short edges.


It was a pretty convincing victory to Rohan. My orcs bounced off his shieldwall and got peppered by bowshot and then mopped up by cavalry. The heroes and freshly painted Royal Guard never got involved, they just hung back failing their activation rolls!

I liked the variable bounds activation and the courage rules weren't too complex either. Leaders never came into it, and I didn't bother with Boasts. Shieldwalls are tough, and I'd probably tweak some of the units- orcs would be light foot, for example, and the trolls should have better armour. It was about the right level of complexity for the game I wanted to play. I thought the recommended 24 points would be too small, but it probably isn't. I'm keen to expand my experience with Dragon Rampant.

I unexpectedly came into possession of a lot of Descent 2nd edition boardgame bits. I plan to paint them up an expansion at a time, so first off the rank will be all the core set stuff. Here are the heroes:


I rebased them on 25mm rounds from Renedra. They come on 20mm bases which don't quite look right. I'm going for speed with most of these, and they are a colourful excuse to experiment with Citadel Contrast.

The second vehicle I inflicted on myself was a Goliath I picked up at CanCon 2019. Again, I spent a lot of time prepping this so I could use all the options. This mining vehicle has two main choices- the Goliath Truck, or the Goliath Rockgrinder.

The Goliath Truck is a troopcarrier. I shaved a few bits away to allow three 25mm-based figures to fit inside. 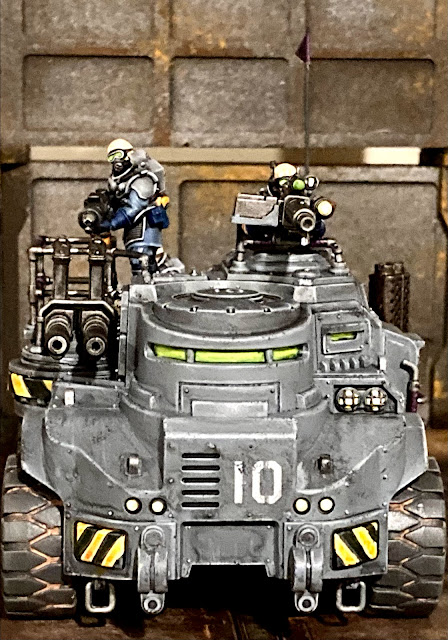 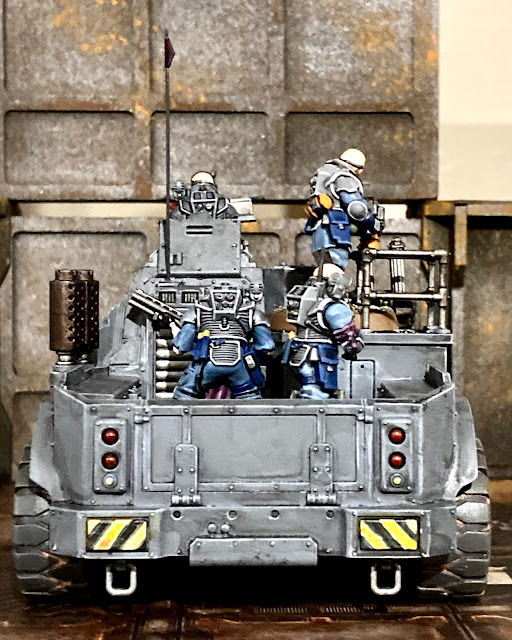 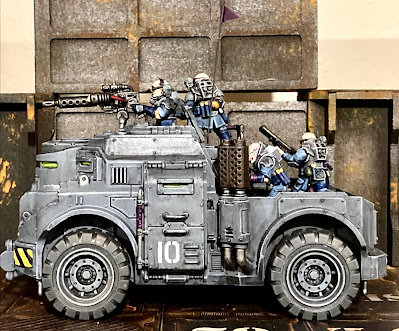 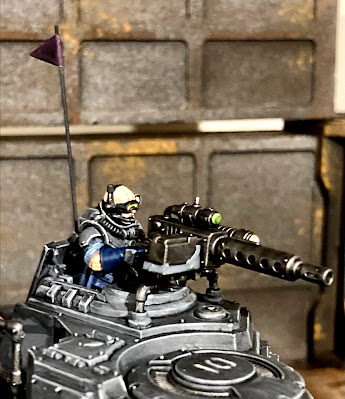 The Rockgrinder is a utility mining vehicle, and the back is covered. The mining arm has a dedicated operator, and the main attraction is the Drilldozer Blade. All of these are magnetized. I used some Tamiya 5mm tape for masking the hazard stripes on the blade, and freehanded the rest. 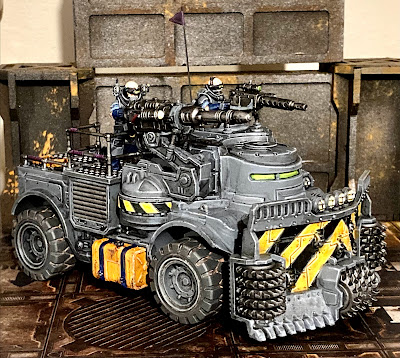 I'm relieved to have these vehicles done, but I didn't love the process. The effects I was keen to achieve seem to be done with airbrushes and specialty enamel products. There are so many little details that I was quite fatigued by the end.

I really haven't found my comfort spot with 28mm vehicles. This kit has been nagging at me for years, until I was Challenged to just get it done. It is a cool and zippy little buggy, with a lot of options. I 3D printed some extra parts to give me all the options, and fiddled around with magnets and superglue and swearing.

I experimented with pigments on the tyres (Vallejo European Earth)- I don't want too much weathering, but I still didn't quite get the effect I was looking for. 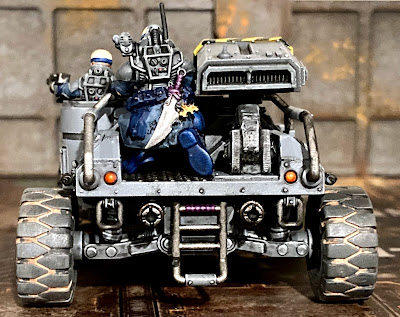 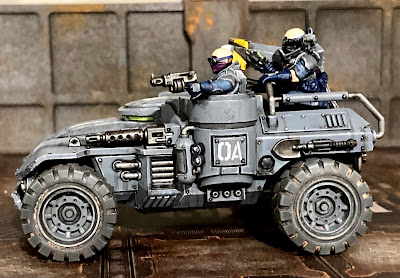 This vehicle comes with an oval base- but based 28mm vehicles are just weird.