I've  been dabbling in a few paint schemes. Intrigued by the imminent arrival of Kill Team, I painted a Chaos Marine who's been lying around. It's not a great sculpt (from 2008?), and is slightly undersized on the new 32mm bases, but I was happy with the final outcome. He's got real tabletop presence. I did multiple thin coats of hot pink, a purple pin wash, and some pale pink edge highlights. He only really came together with the black trim. 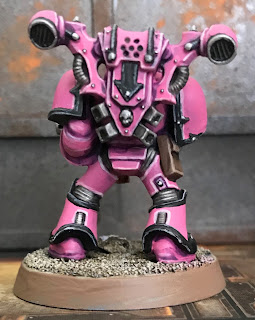 I've got a couple more for some point in the future, as well as a mob of cultists I have a soft spot for.
What I need suggestions for is a chapter name and a corresponding cult name. I'm thinking Painbringers and Painseekers?

With Eucalyptus Bowl out of the way, I returned to painting all the details on these first and second generation hybrids. 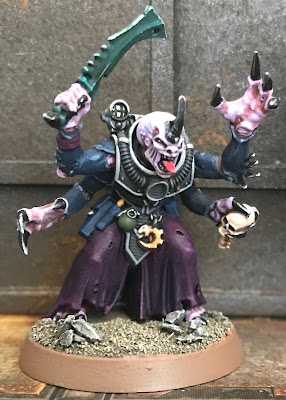 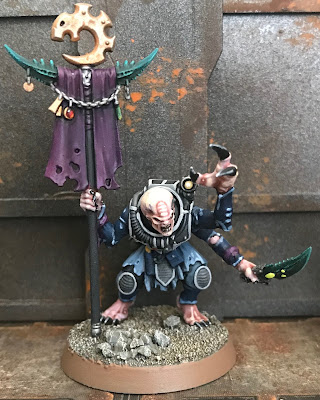 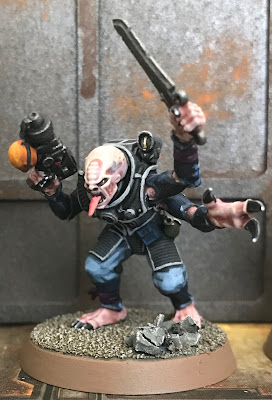 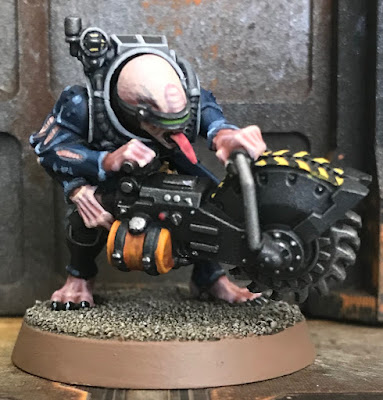 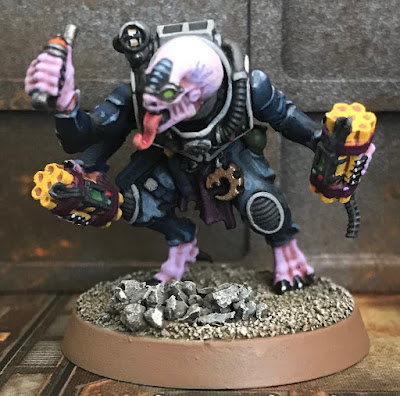 The rocksaw is ridiculously fun, but my favourite is the maniac with the demolition charges! I'm looking at dipping my toe into the upcoming 40K Kill Team skirmish game...
Posted by Barks at 16:50 14 comments:

Last weekend was the 14th Eucalyptus Bowl. I took my new Khorne team (Hardcore Khorne) for a run. I suffered my first casualty in transit, as one of my pitfighters lost an arm... I'm not a fan of fiddly multipart metal figures. I used some coloured bands to help denote different skill choices- I've disliked this previously but it was quite handy.. 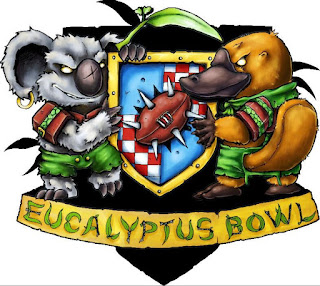 I felt I was the stronger player here, but could not roll dice to help myself. I sustained a meaty six casualties (causing none myself), allowing Aaron to come back and equalise 2-2. This game was played on a thematically illustrated chaos pitch.

I was looking forwards to playing a squishier team, but was wary of the Elve's ability to perform impossible plays. My Bloodthirster finally got revved up and rampaged about the pitch. Despite causing him 4 casualties, Dean came back to equalise 2-2 and almost pulled out a win!

So, at the end of Day 1 I was doing better than I had anticipated with two draws and a win.

I've know Creature for years as a strong player, and I certainly don't misunderestimate the 'Flings. I was 2-1 down and had a chance to equalise but couldn't.

I really struggled against this fat wall of meat, and again suffered 5-0 casualties. Andrew got his revenge for my cheeky win against him in January by throwing a Halfling in the last turn to win 2-1. Pure Blood Bowl!

Day 2 was nowhere near as enjoyable as Day 1, with three losses. But I didn't have high expectations and my opponents were great fun, so all in all it was another memorable tourney.

The Bloodthirster, when it gets going, is terrific fun. But if (as happened to me a lot) it is out of action or not performing, then the rest of the team have to lift their game and they don't really have it in them.