Digganob was the first supplement for 1997’s Gorkamorka. Diggas are humans who aspire to orkishness (orkdom? orkyness?) and take on the ork way of life. I picked up a mob off eBay for use in Five Parsecs/ Five Klicks and Necromunda: Ash Wastes. They will make good low-level enemies.

These miniatures are from what I think of as GW’s Silver Age. The poses are repetitive and the proportions and weapon sizes are off-putting, even for GW. They are, nevertheless, crisply cast with a lot of fine detail. They are vaguely piratical with cutlasses, earrings and black powder weapons.

Battalions of the Royal Australian Regiment (RAR) were deployed to Vietnam between 1965 and 1972. The proportion of conscripted National Servicemen ('Nashos') rose throughout the years. From 1967, New Zealand contributed an infantry company as part of the ANZAC Battalion. 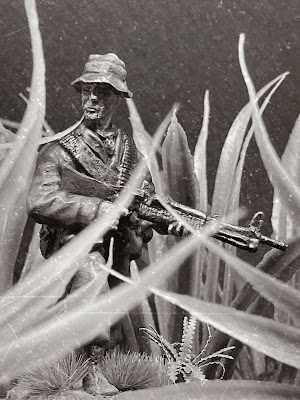 This gunner is patrolling professionally, albeit with a finger on the trigger. He’s got his sleeves rolled down and has cam paint on. He wears a scrim scarf and a giggle hat. He’s made a protective belt sleeve from a cut-up plastic air mattress. 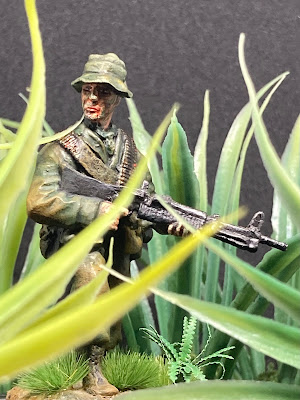 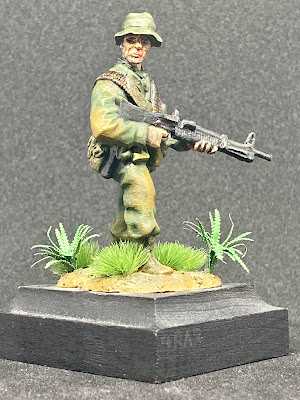 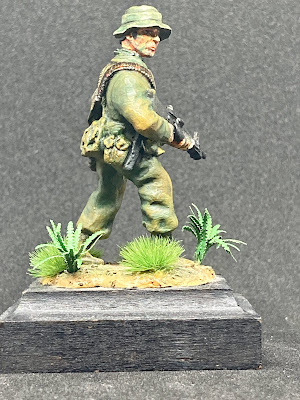 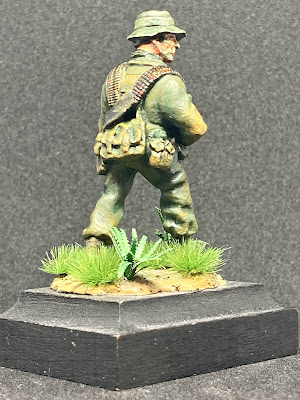 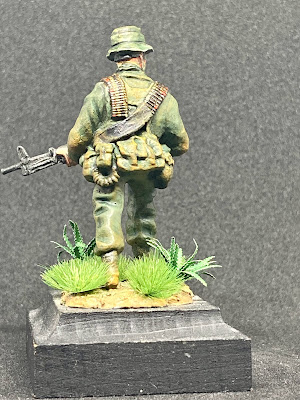 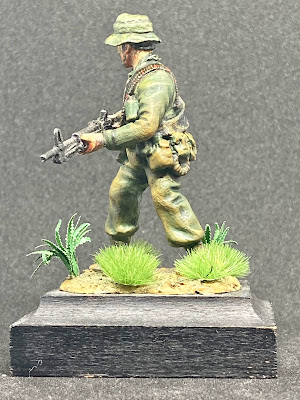 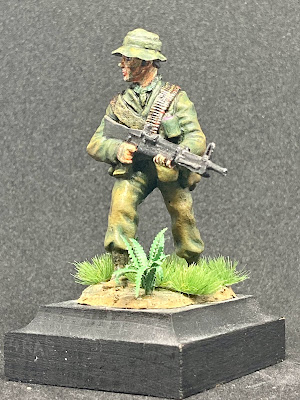 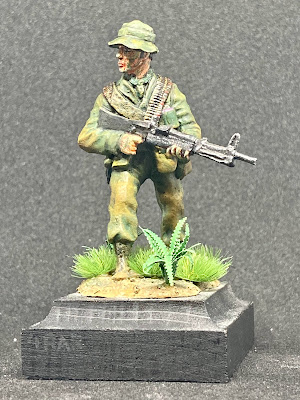 This is a companion piece to my 2016 Anzac Day post, a rifleman with an SLR. It’s an OzMade 54mm sculpt by Mike Broadbent I painted about 20 years ago. I made the distinctive front sight from a bent staple! I have given the figure a bit of a touch-up with a wash, and added some tufts to the base. I also used some HO ferns from JTT. The improved basing really brings it up a notch, but I could blend the groundwork in better. The plinth needs a touch-up as well.
Lest we forget.
Picture sources:
Top: Lyles, K. 2004. Elite 103: Vietnam ANZACs. Osprey Publishing.
All others: Australian War Museum
Posted by Barks at 10:00 6 comments:

"My lord, we have obtained pict-feed of the attack on our armoury."

Gallius Marbec accepted a mission from his mysterious local contact to destroy an arms cache and thus maintain the balance of power. The Guild Troops were bolstered by a scaly and a plasma gun. There was a static firefight on one side while Konrad slipped around the back and, in a risky move, killed two guards to gain access to the armoury. Unexpectedly, the lights went out and reinforcements arrived, taking Konrad out- but not before he planted a melta-bomb... The scaly took a lot of punishment before going down, but Chugger also took a hit. Gallius withdrew and blew up the cache. He spent his payment on medical services for Chugger and Konrad, who are still in the infirmary. His team's activities are drawing all sort of attention, including a shadowy group who have a similar task for  him... 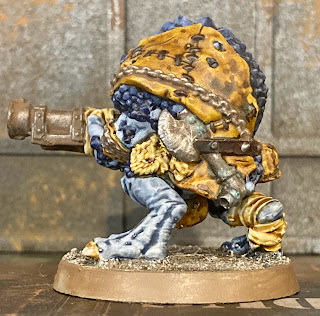 5PfH generates 2D6-and-pick-the-higher-result number of enemies per mission. In my first few games, I was rolling 5s and 6s and getting hammered. Recently, I've been rolling 1s and 2s and having very short games. For this game and going forwards, I'll use some difficulty toggles from the Trailblazer's Toolkit to make it more of a challenge.
I really enjoy the random events in 5PfH- lights going out, reinforcements arriving- these both changed the scenario.

I forgot to use Konrad's 'luck' attribute when he got gunned down, so used it post facto to explain how he escaped captivity and survived a big explosion!

The crew trudge through the arid wastes. Morale is low. The suns beat down and the landscape is lifeless...

A short wasteland encounter. Konrad got ambushed by two squigs, but luckily beat them in close combat. The crew's firepower saw off the rest of the squigpack in short order. The crew get out of the area before more are drawn to the scent of blood...
I love squigs. These 3D prints are Dogosaurs from Gear Guts' Mek Shop. I finished off the mouths with gloss varnish. I should add some more saliva. Maybe print a big alpha squig.
Posted by Barks at 17:00 4 comments:

I've been neglecting this blog recently as I concentrated on AHPC XII. Last week's battle report had some fencing scenery which I made for the Challenge. My first idea was to use spare 20x100mm bases from Renedra. I also thought I could refashion the sprues as the posts. Here's my first frustrating attempt:
Then! I recalled I own a 3D printer. I bodged some simple shapes together on TinkerCAD, an elementary browser-based 3D program.
A couple of hours later I had all the fence posts I would need. Much easier than making them from sprue... The top arms were a bit long so I cut them to size. I made some corner bases from plasticard. I cut some aluminium mesh, and secured it with twists of wire. This was fiddly. Then I PVA'd some grit, and sprayed the whole thing grey. I slapped on some browns and orange, and finished the basework. Voilà! 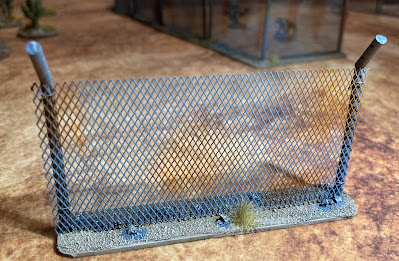 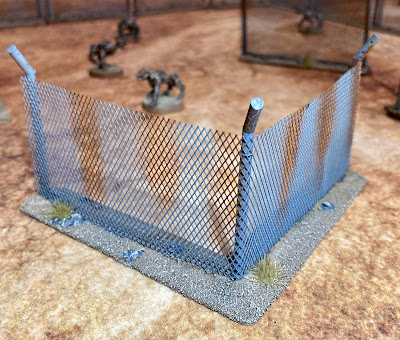 I think I should make a gate*. Maybe some signs which could be swapped out depending on the game I am playing.
* Opening or static? One gate or a pair?
Posted by Barks at 17:00 8 comments: