Robin, the boy hostage. There has been more than one person to assume the sidekick role, and I'll focus on the main four Robins and their subsequent alter egos (there have been others, but they've been written off as occurring in alternate dimensions etc.)


The first Robin was Dick, an orphaned circus child. When he grew out of the role, he became Nightwing, a gymnastic young man who has occasionally worn the batsuit when Bruce has been unavailable.


The second Robin was Jason Todd, a street kid who tried to steal the tyres off the Batmobile. He was killed by the Joker (A Death in the Family, 1988) and is another wound in Batman's tortured soul. Years later, a mysterious bandaged figure called Hush is unmasked as Jason Todd- or is he? Jason does come back from the dead as Red Hood. Red Hood is a bit of an antihero, and unlike Batman & Co., hunts criminals with firearms.


By comparison, Tim lacks a tragic backstory and is my preferred Robin. He's very bright and good with computers, and worked out Batman's identity. As he got too old to be Robin, he became Red Robin with a funky wing-cape.


I'm happy with my progress. I'm working around the challenging lycra bodysuits, and I'm happy with the vibrant yellows and greens. Facemasks are still easier than pupils. The trenchcoats and Red Hood's jacket are just one colour and a wash.

I've counted the figures (it took me several goes to get the same result), and there's 215.

Bruce Wayne? Who's that? Sounds like a cool guy!
LEGO Batman


I love this picture of Batman and Alfred by acclaimed bat-artist Darwyn Cooke:

Alfred Pennyworth is always a scene-stealing character; an accomplice and enabler from the Jeeves school. In Batman Eternal (2014) it was revealed he has a daughter, Julia, who is (obviously) a member of UK Special Forces...

I have a lot of bat-content to plough through, so there will be more mid-week blog posts to come. I need to get a bat-tally going, but don't actually know how many figures I've got! I think it is about 200...
Posted by Barks at 17:00 10 comments:

I have a soft spot for the Gotham City Police. They've got no super powers or gadgets, they're (mostly) constrained by the rule of law and the whims of the Mayor, they're targets for supervillains, sometimes they're sent to hunt the Batman, and are a bit of a laughing stock to other police forces because crazy vigilantes do their work for them. I liked Gotham Central (2002-2006), a comic book series about the police where Batman and friends are hardly present.

I've always liked Jim Gordon, a man thrust into the centre of the Batman's shenanigans. He overcomes corruption in the GCPD and rises to its very head, but somehow can't work out either the identity of Batman or that his daughter is Batgirl. In Year One, an excellent origin story, it is hinted that he has always known about Bruce Wayne but chooses not to let on.

I liked that depiction of Gordon wearing gloves and carried that over. I'm a little concerned my paintjob looks like he's got a Groucho Marx disguise on...

Harvey Bullock appears to be a slob, but is a hardworking and loyal detective. He's old-school and not afraid to break the law to get results. His partner, Renee Montoya, is an excellent detective in her own right. She has struggled with homophobia from both her colleagues and her immigrant parents.

For their Batman boardgame, Monolith decided to draw solely from comics for design inspiration, and not from film, television, or computer games. Most of the time they drew from the 2011-2016 New 52 era of stories, but there are exceptions.

This Catwoman is from Hush (2002). Hush is beautifully illustrated, and the mystery tale is a good introduction to the (often convoluted) storylines from the comics world. I gave my Cat orange lenses- they often change depending on the artist and lighting. 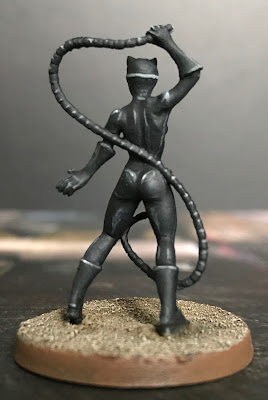 And this Catwoman is from The Long Halloween (1996), another excellent mystery by the same writer, but a different illustrator. She's portrayed as very muscular and the sculpt catches this. 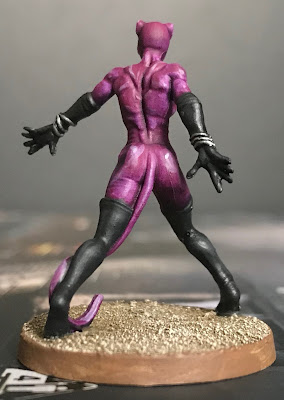 I wasn't looking forwards to painting all the lycra and leather for this game, and I did struggle a bit with the highlighting. In the end, I think they are acceptable.
Posted by Barks at 17:00 14 comments:

I got to play Kill Team using my mate's figures and scenery last weekend. We're both quite inexperienced and aren't up to speed on all the nuances and quirks of the system, but gave it a fair go.

I borrowed his Deathwatch: five marines including a Frag Cannon, a Black Shield, a Bolt Rifle, a Thunder Hammer, and a leader with a Phase Sword.

I didn't get a good picture of his Harlequins, but there were Harlequin's Kisses and fusion pistols.

We played a mission where I was defending three objectives. He could capture or destroy them.


We also played a game of Kill Team Arena, which is a more 'balanced' scenario in closer confines. The Deathwatch pulled out a win here as well.

In both games the Harlequins were, as expected, blisteringly fast. They didn't hit as hard as expected, however, and were very fragile. Their fusion pistols are still very nasty, but the Deathwatch Frag Cannon is devastating, particularly in overwatch.

It was great to play on nice scenery with gorgeous painted figures.


Photo effects with the Lens FX iOS app.
Posted by Barks at 17:00 8 comments: