This is one of the greatest gun-play fight scenes ever:

I really enjoyed Kick Ass, and I converted these figures for a bit of fun. 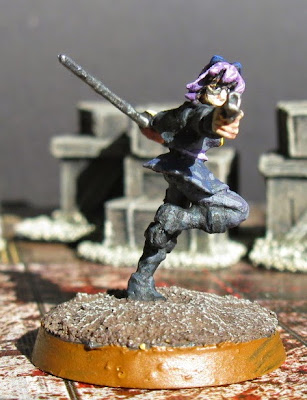 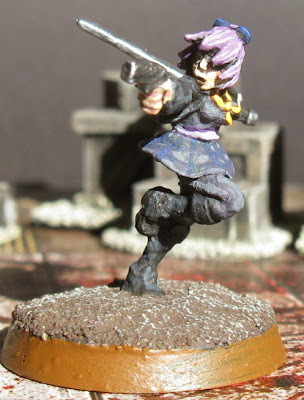 Hit Girl is based on a Eureka Kung Fu Schoolgirl, with a spare sword from a LotR Orc. The outfit isn't exact, but I think I've got the 'vibe' down OK. I used a different undercoat, which unfortunately turned out rather gritty. I struggled with the hair, I think it needed a little more red. It would have been nice to add a yellow grenade and some pink pouches, but the yellow neckerchief will have to do. I didn't sculpt the mask, I just painted it on.

Big Daddy comes from the 'Batman Begins: Shadow Assault' boardgame, which I picked up on clearance at a toy store a few years ago for $9.99. It also comes with 20 clear plastic ninjas. I threw everything else away. 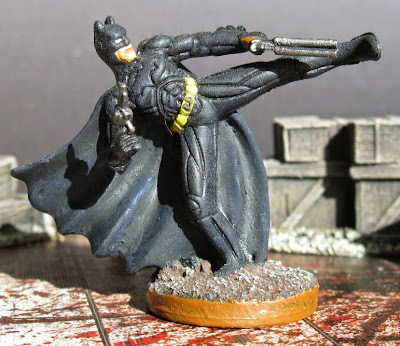 I used some guns from Reaper. I like the wooden stock on the sawn-off shotgun, it really helps that jarring 'Batman using guns? WTF already?' effect. It looks like he's about to shoot his foot, but he isn't! I'm not really happy with the angle of the revolver hand, it looks uncomfortable. I did the classic Batman white eyes, and left the ears on. The yellow helps tie the two figures together, but again, it would have been nice to add a grenade to his belt. I left this figure on the integral base it comes with, which is a tad smaller than 25mm. It would not have been worth the effort to do it properly.


Finally, because I don't know where else on this blog I'd put them, are the ninjas from the boardgame. Quickest. Paintjob. Ever.


Crates are from Battle Works Studios (out of business), floor tiles from Doom.
Posted by Barks at 21:33 9 comments:

THIS! IS! BLOOD BOWL!

'Pandora's Foxes', my Blood Bowl Amazon team. These are from the Wargames Factory multipose plastic Amazon kit, which are cheap and easy 'conversions' because none of their hands are holding weapons. I used the different poses and helmets to represent different team positions. I went for a Frank Miller 300 vibe.

I used this really nice Eureka figure as my team coach, or potentially as a star player.

This is a really quick and cheap team to assemble. If I had to do these again, I'd go for all the Blitzers having the menacing full-face helmets. I'd keep the kneeling poses, despite their looking like air guitar players. I'd spend more time trying to get smoother tones. If I ever come across this Gorgon Studios figure, it will become a team wizard or coaching staff member:

I've been in the painting doldrums recently. I've forced myself to just keep painting, finishing off small projects along the way, and keep achieving little things.
Fortuitously, The One Ring website had 'Radagast' as the topic for their recent friendly painting challenge. I haven't actually painted (let alone assembled) any of the 'Escape from Goblin Town' stuff, and this seemed like a good way to get things started and get the juices flowing again. 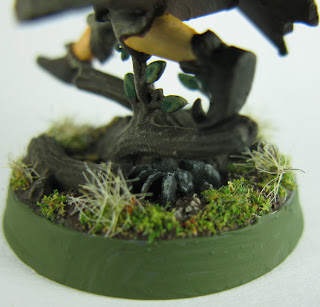 I tend to paint my LotR figures a bit more on the darker side of the spectrum to match the film, which looks OK up close, but a bit more drab from a distance. This figure is no exception with all these shades of brown, but at least I'm consistent.

I'm happy with the outcome, and I think this has not only relieved me from the doldrums but also reinvigorated my need to paint the Hobbit set.
Posted by Barks at 14:50 11 comments:

Fixing a hunk of junk

Just a quick one today, as I try to force myself out of the painting doldrums ( I should have posted this on May the Fourth, of course). I got a rather nice Millennium Falcon for X-Wing, and note that the otherwise good paintjob is let down by the absence of the sublight engine glow. The TIEs and X-Wings themselves, you don't really miss it, but on this big ship it is somewhat conspicuous in its absence. 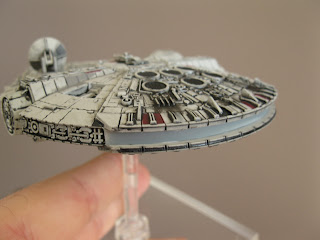 I did some research:


I had it in my head that the engines give off a blue glow (like the box art), but the film clearly shows predominantly white (except when escaping Tatooine). Maybe there's a faint blue tinge around the edges if you don't quite look at it directly...

Anyway, I decided to go with simple, and a few thin coats of white later: 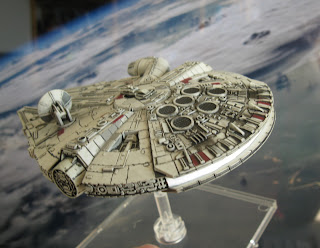 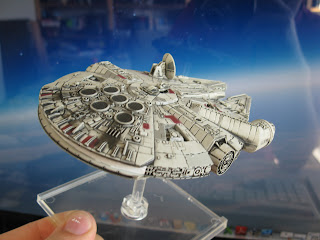 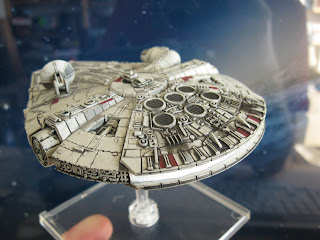 I had been thinking of leaving it there, but already I am thinking of adding a tinge of blue- here's a nice one from Martin at the Fire Broadside blog: