A Game of Thrones

I had my first game of the Game of Thrones boardgame, with five other players. It is a nice little design based on The War of the Five Kings, with armies and fleets plodding about the board. The first player to get seven castles wins, or else whoever has the most at the end of ten rounds. As soon as someone gets close to winning, his (or her!) rivals tear them down. There's some additional friction with unpredictable end of round events, and the intrigue is abstracted by blind bidding to decide turn order, tie-breakers, and other hierarchy. You cannot lose characters, which detracts from GRRM's vision somewhat! 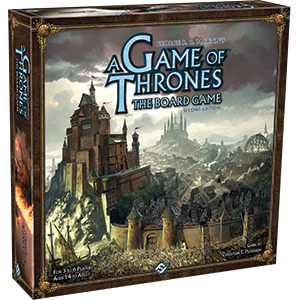 I was House Greyjoy (black), and I can't say things went well. I was hit by a surprise attack from the Lannisters (red) led by Gregor Clegane and Tywin Lannister, their most powerful generals, which took Pyke and left me permanently reeling for the rest of the game and struggling to stay alive.

There was a continuous back-and-forth between Houses Martell (sand), Baratheon (yellow), and Tyrell (green), whilst Stark (white) built up their force and inexorably marched south. I threw myself behind House Stark lest they crush me alive, but wasn't surprised when they eventually stabbed me in the back! Curse your sudden and inevitable betrayal!

The overall winner was House Tyrell, with six castles, in a tie-breaker with House Stark. I felt somewhat vindicated that, since the Lannisters had expended so much energy attacking me, they ended up coming second last.

I enjoyed myself (since the pressure to compete and win was off)! It's a nicely presented game that works well with six players, that captures many (but not all) of the saga of AGoT. Where were my dragons?!

This is as good a time as any to show some figures I painted in the just-finished Analogue Winter Challenge:

First, some crows. These are for the board game Zombicide, but are available separately, and I thought they would complement my SAGA revenants nicely. They could work as fatigue markers, and generally look good en masse. 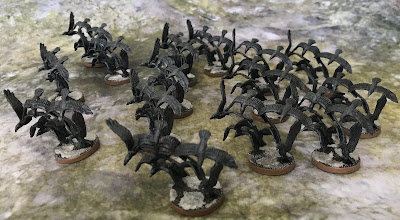 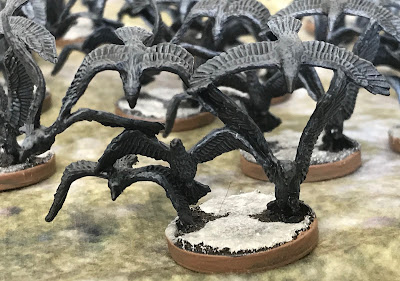 Next, a boy and his wolf. The boy is from Elladan, and I worry about the join between his wrist and his sword-hand. The wolf is from Reaper and is my first figure from their Bones range. 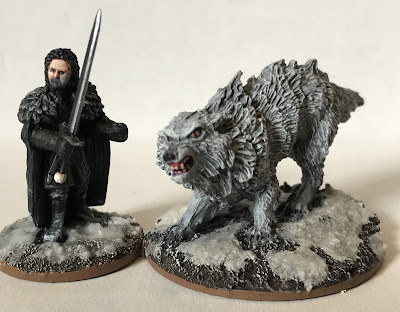 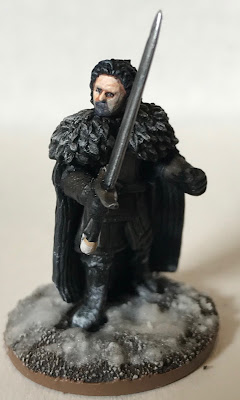 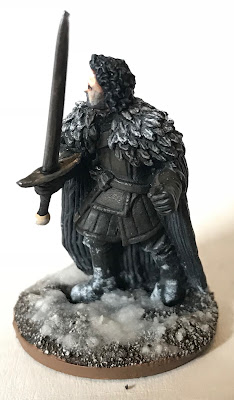 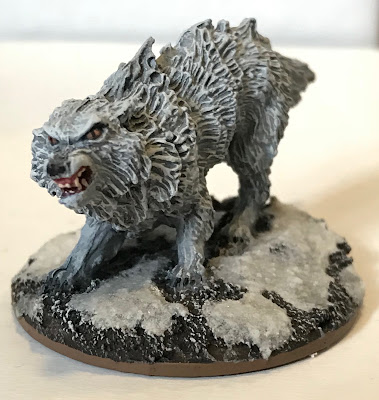 Finally, my first figure from Annie at Bad Squiddo was her 'Little Lady Warmonger', which comes with a mounted and dismounted version. A cracking little sculpt! 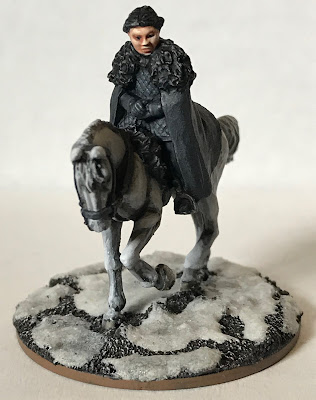 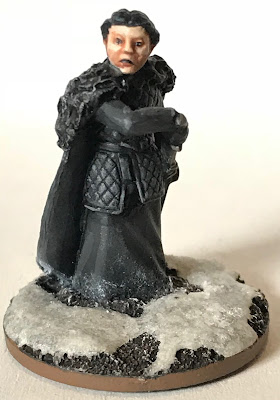 So, I'll be keeping a close eye on Fireforge's upcoming figure ranges...
Posted by Barks at 12:51 4 comments:

I had my first game of TravelBattle- see more pictures of my painted units here. I took the Reds against the perfidious Blues.

Each player divides their equal units into three brigades to their liking. It’s an IGOUGO system, with foot moving one space and cavalry moving two. Units must start in continuity with their brigade commander. Combat is resolved against adjacent squares by rolling 1D6 per unit and comparing highest results- elite troops may reroll. A difference of one is a pushback one square and an inability to move next round. A difference of two forces a retreat to the board edge and a high chance of routing completely, and a difference of three or more is unit destruction. First player to destroy two enemy brigades is the winner! And that is pretty much it, barring some minor rules for squares, artillery and terrain.

I created one purely cavalry brigade and two identical foot brigades, aiming to hold the enemy on my right and crush him on my left. My opponent, General Amnese, had a grand battery to my right and two brigades with a mixture of foot and mounted attacking my left.

I lost, with both my left brigades being eliminated. It took about an hour, including fiddling through the rules. Importantly, we had fun.

TravelBattle is an aesthetically charming game from the Perrys. Once assembled (and preferably painted!) you've got everything you need to play in a foam-lined case- figures, terrain, rules, dice. I do think that it is a decent all-in-one package. And the figures are lovely.

But it is not without issues, principally rules-related. TravelBattle has the air of a vanity project from the deservedly successful Perry twins. They have pictures of their original 6mm set in the rulebook, and have transformed their figures and terrain into a new lovely plastic form. The ruleset appears complete, but is unpolished. Better formatting and illustrated examples would be welcome.

General Amnese thought it was an interesting starting point or toolbox for rules tweaking.

For more variety, compatability, and  historical accuracy in figures; you'd be going with 6mm metals (with the time, effort, and transport issues).

For a clever game with portability, replayability, and a great number of varied factions, have a look at Manoeuvre (but no miniatures).

For a fantastic scenario-driven tactical quick play game, I don't think you can go past Commands and Colors Napoleonics.

All of which leaves TravelBattle as a bit of a niche game in an already niche hobby.
Posted by Barks at 18:05 4 comments:

I wasn’t long into the Analogue Hobbies Paining Challenge when I unexpectedly acquired a secondhand copy of the Perrys’ TravelBattle. It tickled my paint gland and so I took a detour into 8mm Napoleonesque figures.

I say Napoleonesque as the two sides are identical sculpts. I followed Aly Morrison’s lead and painted a Red force and a Blue force, with blue and red facings and flags respectively. I haven’t seen any White or Green forces, but they or others could easily be done. The figures have a lovely toy soldier aesthetic, which influenced my simple basing scheme.

When I got this secondhand, the red force had already been assembled. Painting crossbelts on the second row of troops is not fun...

Next week I'll put up a little battle report and my thoughts on this game.
Posted by Barks at 12:40 12 comments: