Land worth fighting for?

I first wrote this article in early 2009, for a website that later went defunct. Would I do this project again? read on...

GW released their all-plastic 6x4 modular 'Realm of Battle' board in late 2008, amid plenty of web commentary about cost and effort. After long deliberation, I chose to get a board and to paint and flock it to resemble the plains of Rohan- dry grasslands with plenty of tussocks and interspersed with rocky outcrops. I wanted it to look realistic but still retain playability and be reasonably quick to complete. I was able to use some existing scenery products I already had, and got a few cheap art store items to speed things up. Of course, the steps given below could be applied to a home-made board as well.

The board in action with some GW Modular Hills

I did a practice piece first to make sure I had the look right; it turned out better than I had thought it would. I changed my technique slightly for the actual gameboard; the following report details my final technique. I have chosen to note a few of the mistakes I made and things I would change in order then anyone else who tries this may avoid making the same ones. 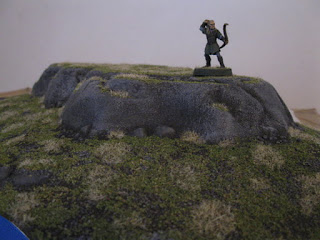 Brushes:
Flat 2" wide brush
Natural sea sponge (very cheap from an art store, about half the size of my fist)
Foam packaging (as seen in blister packs etc)

First step- get rid of the skulls. I used Polyfilla Skim Coat plaster to cover the skulls. I had a sculpting tool on hand and put some cracks in to better blend with the existing sculpted groundwork. I also covered the scattered loose skulls, but left the long bones with the intention of flocking over them later. 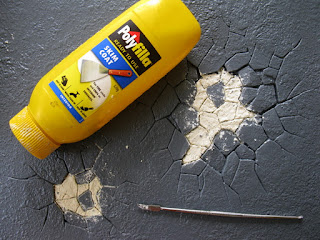 The skull pits covered in plaster and sculpted 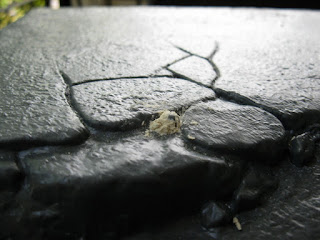 A skull changed to a rock with a blob of plaster

The entire terrain was basecoated with Burnt Umber using a flat brush. I used a few drops of washing-up liquid to ‘extend’ the flow of the paint and get into all the cracks. I watered the paint down as I was coming to the end of the tube and so didn’t end up with an even coat. I wasn’t concerned by this as I knew it would look fine at the end. 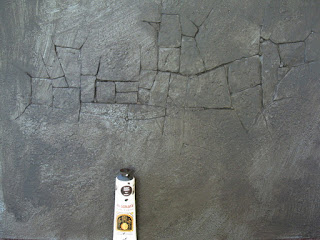 An undiluted black wash was applied to the rock areas, to make the shadows a little darker. 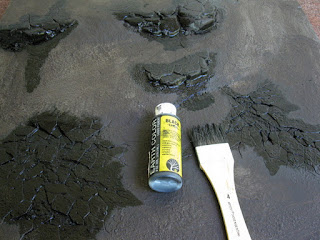 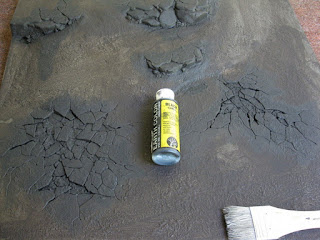 After the wash had dried, a heavy drybrush of Neutral Grey was applied to all the rock areas. This was applied using foam as a brush, but could be done with a brush instead. I wasn’t fussed about getting grey on the earth areas; I think it looks more realistic not to have a sharp dividing line between the rocky and earth areas. 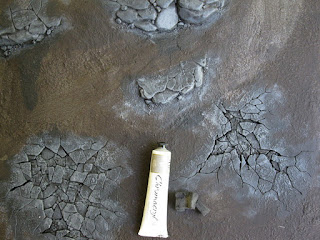 A mix of Neutral Grey and Taffy was applied as a highlight drybrush to the rocks. 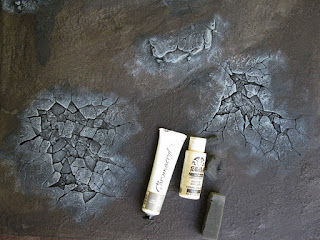 A final drybrush of Taffy was applied to the entire board. I found this too hard to apply evenly with the foam, and switched to the brush. I used the next step (flocking) to cover the mistakes I had made, but would rather not have had to. If you are not going to flock your board (for the wasteland or desert look) then you do not want to have any brushstrokes showing. 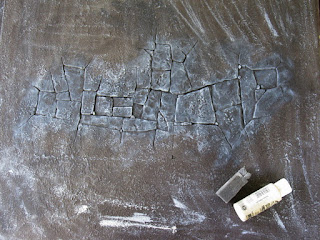 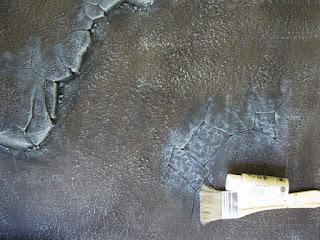 The final drybrush with a brush- less streaky results

The next steps were to apply flock. I wanted to cover the area quickly, but not to look uniform. I used a piece of natural sponge liberally smeared in PVA and applied that to all the earth areas, taking care to avoid the rocks as much as possible. I wanted to leave about a third of the earth areas exposed. My turf mix (3:2 Green Blend: Earth Blend) was then sprinkled on and tipped off onto newspaper. I did about 8x8” at a time like this. Finally, I used an old brush to put more PVA around any areas that I had avoided due to the imprecision of the sponge and especially onto flat surfaces amongst the rocks. 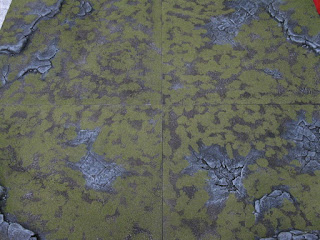 The next step was similar, except using static grass and only covering about a third of the area. I was trying to get the flock onto the green turf, and not the bare earth, in order to get the grassland look right. 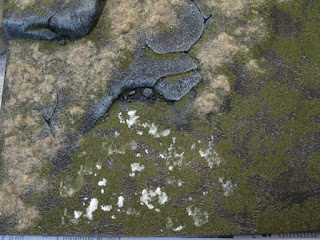 Static grass going onto a small segment at a time, showing the irregular way to apply the PVA with the natural sea sponge

The final step was to coat the boards in spray matt varnish to hide the shine of the PVA, especially on the rocks or where turf had not stuck to it. 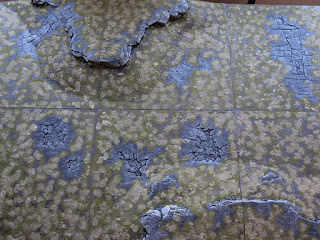 Finally, I got a roll of 75cm wide bubble wrap which I interweave between each board for transport in its bag- it fits very well and isn't a struggle to get closed at all. The bubblewrap prevents the boards from rubbing and losing flock.

The board in action again!

Summary and closing thoughts- if I had to do it again, or had more time

I spent plenty of time deliberating about whether or not I was going to get this product, and so when I did I already had a clear plan in my mind of how to approach it. A few practice runs on other pieces of scenery taught me some tricks and things to avoid as well.

This project took me a few hours to prepare and paint on a warm afternoon, then each board took maybe an hour to flock.

The flocking is messy- use plenty of newspaper- strongly consider a desert board! Don't flock outdoors as you'll have flock everywhere. Don't do it indoors either for the same reason!

I would have like to have some longer grasses, especially around the bases of the rocky areas. I would also consider adding some small gravel/ sand areas to give a bit more definition to the bases of the cliffs and add more texture (textures = interesting).

It's expensive, and not as flexible as separate boards and hills, but it is good quality and at the end of the day I have six nice boards that conform nicely to GWs modular hills. They get positive comments on the all-too-rare opportunities I game on them. They're lightweight (compared to MDF) and come with a nifty bag for storage and transport. Ultimately, if I had to plan the cheap way to do this, I'd still be planning.