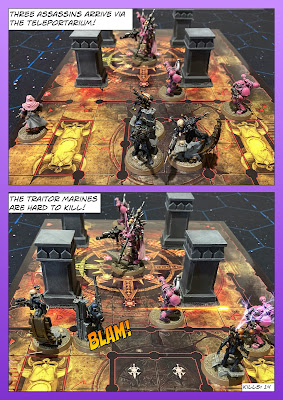 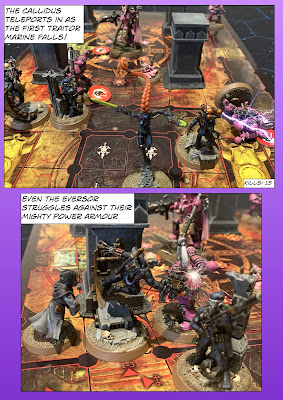 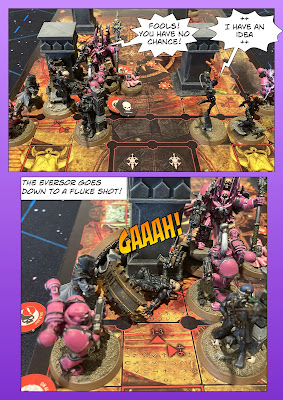 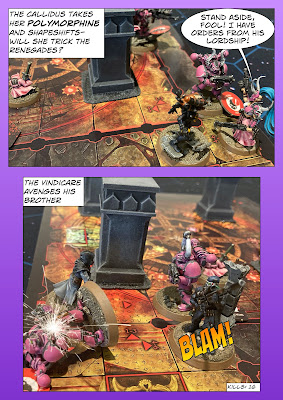 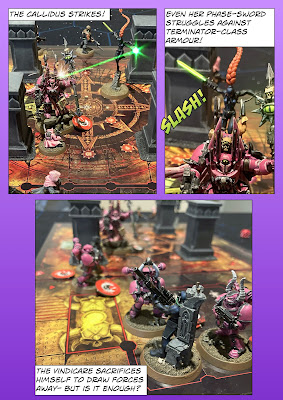 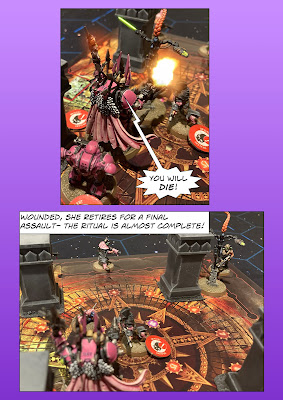 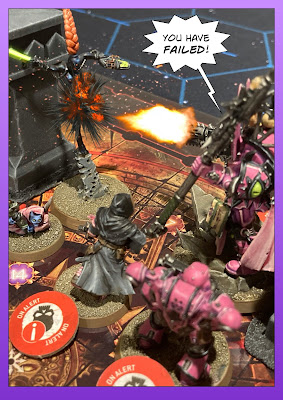 Oof. I got through the teleporter with many turns to go and all my Assassins unwounded. Things then went downhill fast as I got surrounded by Traitor Marines, who are both harder to take down and harder-hitting than cultists. The Eversor used up all his luck in the doorway and went down, as did the Culexus. Full frontal assaults aren't a good idea! I got hit hard by event cards which reduced my actions on multiple turns.
But the Vindicare and Callidus kept my hopes up. The Vindicare is, sadly, the weak link in this team- short-ranged indoors environments aren't his forte and he consistently underperforms. But today he held his own against multiple Traitor Marines for many more turns than he should have! This distracted multiple guards allowing the Callidus to take her polymorphine and shapeshift into a cultist- I was really happy with the miniature I chose for this deception- and sashay up to the Big Bad.
She got in two of the three wounds needed to take down this armoured beast, and then survived the counterattacks. She went for the third- failed- used her last poison blades for a reroll- also failed. On literally what would have been the last turn of the game, she desperately went in again but fell in a hail of fire.
The Chaos minis are showing their age, but the Assassins are lovely, even if I'm not a fan of the extravagant scenery bases following them around. I like how the little Familiar is used as an on-table turn marker. The boards are gorgeous, almost too glossy, but unfortunately there's only one way to set up the map. The automated enemy rules are really good. I used some Mines of Moria columns for a bit of pizzazz.
Assassionorum: Execution Force is well out of print, but if you can find it, I'd recommend it.
++
Thought of the day:
Victory requires no explanation.
Defeat allows no explanation.
++
Made with Comic Life 3 and LensFX
Posted by Barks at 17:00